Happy mid-April weekend to you all! Whether you’re observing Ramadan, Passover, Easter, Coachella, or something else entirely, I hope this post finds you doing well.

Today’s celebrates one of these occasions quite egg-celently in this constructor’s NYT debut! (Congrats, Emet!) Let’s check it out: 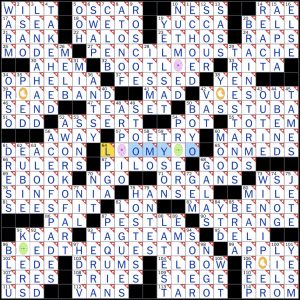 Turns out, there are a number of rebus EGGs hidden throughout the grid (and the NYT app displays them quite colorfully when the puzzle is fully solved – nice!). It was fun to discover the eggs, since they thankfully weren’t placed symmetrically, and allowed the solver to be “On the Hunt,” throughout the solve. Fun!

My one small ding against the execution of the theme, perhaps, is that over half the theme entries had to rely on a -ged/-ger/-ges version of the base word or phrase to work, since the base itself ends with just an -eg. For example, bootleg, veg out, beg the question, Winnipeg, etc. all had to be modified to get EGG to appear. I guess I would have liked there to be more entries like REGGAE BAND and ARPEGGIO that have EGG as a natural part of the word or phrase, but I reckon there might not be enough of those for a full 21x puzzle. I did appreciate at least that none of the EGG rebus squares were meant to mean “egg” itself, so fair game.

Other random thoughts:
– I appreciated how many entries could have been clued as proper names but weren’t: WILT, NESS, RITA, and others. For me at least, puzzles that are proper noun heavy get super tough if they’re unknown to me.
– 47A: TEA SET [China makes up much of it] – I wonder how many people tried to figure out how ASIA would fit with two extra squares.
– 60A: MARINE [Bea Arthur was one before her acting career] – Now this is the kind of cluing I’m here for! This could have been clued in any number of typical or masculine ways, but this is a really fun pop culture bent that allows a woman to be centered. Nice.
– 114A: PROM [Broadway musical centered around two girls in love, with “The”] – Yes! I am always proud to see LGBTQ+ representation, especially when this could have been clued any other number of ways.

What did you think of the puzzle? Let us know in the comments below. And be well!

Our theme revealer today is CLOTHESLINES (68d, [Dryers’ predecessors, and a theme hint]). The other theme answers, all in the Down direction, are familiar phrases that contain a hidden article of clothing. That article of clothing is “hung out to dry” by having it turn to the Across direction at the appropriate point before the theme entry continues back in the Down direction. 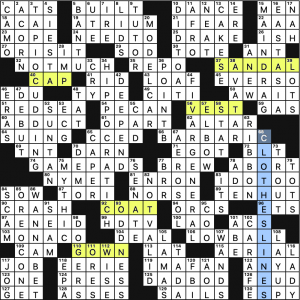 I like the idea of clothes being “hung out to dry” in the sense they’ve been abandoned, because that feels like what’s happening here. The main theme entries have abandoned these pieces of clothing by leaving them in the Across direction.

But I was really expecting some sort of visual element here with the clothes all in a line somehow. Don’t know if that would even be possible, but when the revealer is CLOTHESLINES, you kind of expect that. And I definitely wanted all the clothes to be things people actually hang out to dry. Do people actually hang sandals on a clothesline (despite the existence of a lot of flip-flop-hanging clip-art)? I’m okay with a GOWN because it’s a legit article of clothing even though (1) you’re probably not washing it at home and (2) you’re probably not putting it on a clothesline where it’s at the mercy of the weather and birds doing their business. But sandals?

In fact, the grid is quite clean; I’m not finding much of anything scowl-worthy. I’m not really a fan of “I’M A FAN” because it sounds much less sincere than “I’m a big fan!” or “I’m your biggest fan!” But truth be told, I think I have heard it used outside of crosswords.

Clues fall on the straightforward side, so I will close things up. In sum, I’m liking the grid, and the theme is solid enough, but I wanted all the clothes to be on one or two lines somehow. 3.25 stars.

THEME: Apt words suggested by common phrases are “broken” throughout the puzzle 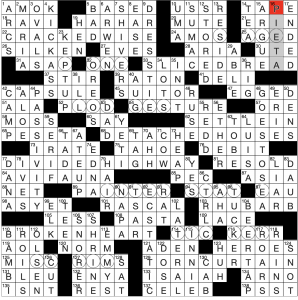 And, of course, it wouldn’t be a Birnholz puzzle without another layer: The first letters of all the “parting words” collectively spell SPLITS. Excellent!

There’s a helluva lot of theme in this puzzle. Although it might feel like *just* six theme answers, there are many constraints as each of the smaller words that make up a section of the “parting words” need specific placement. And if the fill suffered at all, I certainly didn’t notice during the solve. I mean, KICK ASS is in the fill. That KICKs ASS.

Dividing words across entries is nothing new, but I do like the inclusion of each of the suggestive phrases in the grid itself. Normally, in a theme like this, you’d simply see a single revealer that shows a commonality amongst the broken words.

Looking back through the fill, I do notice a bit more Crosswordese than normal- maybe not Crosswordese per se, but definitely words that are featured very frequently in crosswords: AMOK, RAVI, AMOS, ARNO, BLEU, ADEN, ARIA, TO BE. That kind of stuff. That is to be expected with those tight constraints. For the most part, however, the real Crosswordese- those words that seem to be made up just for crosswords- is minimal.

A few new names for me, more in the clues than the entries themselves. I am curious as to who/what Strong BAD is…

Interesting. I only watched the first minute of this clip, so I can’t attest to whether or not the whole thing is family friendly, but you can get the gist of the character here:

DRESS TIE made me balk. I wear ties quite frequently. I don’t think I’ve ever called them DRESS TIEs!

All in all, a fun puzzle. And I’m told Evan will be presenting a re-run next week, so hopefully he is enjoying a well-deserved respite.

Happy Easter, all! Hope the bunny EGGED you!

Theme: Each theme answer is bracketed by letters spelled out CHANCE, making luck a container within each answer.

Okay, so we all learned the CHICKEN DANCE because of Jimmy Neutron, right? Because that is the stand out memory of my childhood in regards to this phrase. ZELDA was also a past, present, and future reference for me right off the bat in 1a [“Title princess in a videogame franchise”], as was 11d [“‘Buzz Lightyear to the ___!’”] RESCUE. CHANGE OF PACE came quickly for me; I’ve been alternating in moving between Across and Down clues in puzzles as of late, and so I caught most of this on the crosses, save for the final F from FINALS. CHANTILLY LACE took longer because for the life of me, I can never remember fabric names, but I had LACE at the end from the start. The rest fell right in.

We had a variety of exams mentioned here, from FINALS to the 49a [“Future JD’s exam”] LSAT and 54d [“Future drs.’ exams”] MCATS. I also enjoyed the pairing of 23a [“Fish found backward in the next clue”] EEL with 26a [“‘Sense and Sensibility’ director Lee”] ANG.

A few other fun facts from this puzzle

I feel like chance was in my favor today with this puzzle, especially since my solving time was well under my usual four minutes. Definitely well worth that time and more.

How many months have 28 days? They all do!

THEME: Abbreviations for months are at the beginning of common phrases 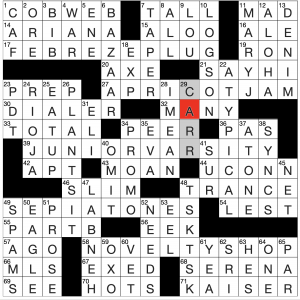 Just ran through the “30 days has September…” rhyme, which I always need to do in order to figure out the months with less than 31 days, and it is indeed those five! In order to boot. Nice! The phrases themselves are fun too, my favorite being FEBREZE PLUG, even if my original answer was FEBREZE PLUS.

Mostly enjoyed the fill too. Favorite was LABNEH, which was a key ingredient in many a Blue Apron box when I went through that phase. ALOO Gobi was new to me, as was ARIANA DeBose, ELI Goree, and if I’m being honest, I had no clue that MLS was an  abbreviation that means Major League Soccer. Not ready to embrace CAF as a casual way of saying “cafeteria” and I think it’s cheating to clue uncommon surnames like CARR without an actual person (here it’s [Fitting surname for Otto?].