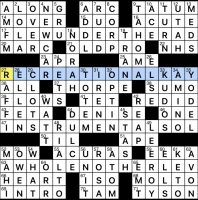 Clever theme this week! Phrases ending in palindromic words are cut off after the middle letter of the palindrome. 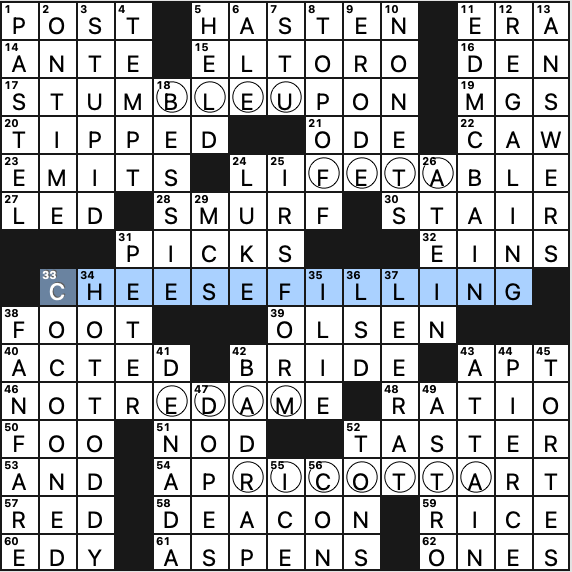 Solid Tuesday offering. I tried CHEESE STUFFING at first because “stuffed shells” is a phrase, but CHEESE FILLING is definitely better.

In the fill, that SW corner is quite nice with HOT TODDY, COCOONED, and FANFARE stacked vertically. On the opposite side, I didn’t know the author ED MCBAIN [Crime writer with an 87th Precinct series], but Wikipedia tells me, “His 87th Precinct novels have become staples of the police procedural genre.” Other niceties: EL TORO, TOP OFF, “DE NADA,” and BAD RAP. 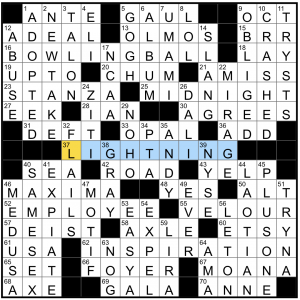 What a treat! It’s April and there’s a theme centered on the word “strike” and not a single themer is about baseball. I’m not sure baseball fans realize just how pervasive their fandom feels (to those of us who could take it or leave it) when a new season starts … it’s kind of a lot!

Roughly five different uses of “strike,” though the LIGHTNING and INSPIRATION sort of both land on the “hit” meaning. Works for a Tuesday puzzle.

Fave fill: PLUS ONE, SAME-SEX (this court makes me nervous about established rights remaining established, though), MEDUSA (role model for us all!), and a NEW TAKE (though fresh take might be more fun) on a familiar concept. I also like TRYNA, as in an elided “trying to.” “I’m not tryna run a website that comforts the comfortable and afflicts the afflicted.” 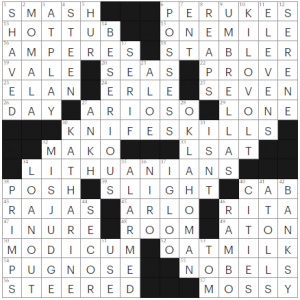 I haven’t done enough of the New Yorker’s new daily crosswords to calibrate their absolute difficulty levels, but Tuesdays are intended to be the second-hardest of the week, after Mondays.

This one felt relatively easy. There were a few entries—mostly in the southwest, as it turned out—which I needed to sit on, to resolve dilemmas via crossings:

Over in the southeast, my answer for 52a [Nondairy latte ingredient] was an instaget of SOY MILK. Unfortunately, 53d [Feline fellow] Y–M wasn’t looking too good, and my brain 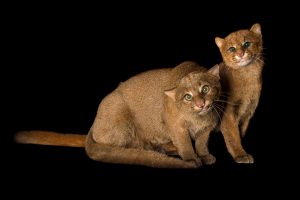 compulsively took a Y-cat detour for the obviously-doesn’t-fit and obviously-too-obscure-for-a-regular-crossword jaguarundi, Herpailurus yagouaroundi. Perhaps if I ever get around to constructing crosswords I’ll see if I can work it in.

So, a correction to TOM and OAT MILK.

For rough comparison (if you’re into that sort of thing) my solve time was about 6½ minutes, which includes fussing with the web app’s settings (stay in current word; space bar erases current letter).

What a trip! More challenging for me today but great entries and cluing with a fun theme and themers. 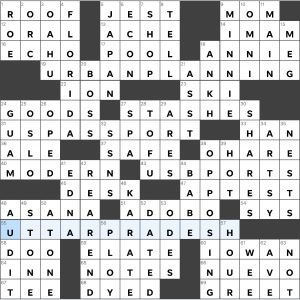 Theme: each themer starts with U for the first word and P for the second for the two-word phrase

Fun theme and themers that felt like they took me on a trip! URBANPLANNING creates and maintains location, and for this trip I’ll grab my USPASSPORT then travel to UTTARPRADESH for the sites and (always a travel focus of mine) delicious food. The first two were easy for me but the third themer needed crossings, as my world geography is not as strong.

Stumpers: ASANA (stuck on another word for “pose” instead of type of yoga), EDNA (tricky cluing style for me, usually need crossings to narrow options), and JEST (needed all crossing, just didn’t click for me today)

The southwest corner was a tough section for me. DOO and INN just weren’t enough to give me a foothold and being stumped with the themer, I was hoping for more crossings to get 55a. Finally with AUDIT and ASANA in place, the rest filled in quickly. Hopefully you all had an easier time with this corner than I did today. Excellent, fun puzzle none-the-less! 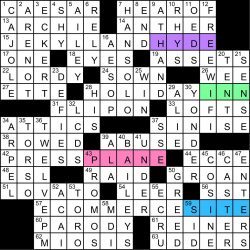 Hello there, everyone! I hope you are doing well and staying safe!

It is a double dose of Gorski today, as she also produced today’s puzzle for The New Yorker, and today’s offering in this space provides a cleverly hidden message, one that is the answer to the teaser posed in the grid’s title, “What crossword chameleons do.” When the four words at the end of each theme answer are put together, in order from top to bottom, you get the homophonic phrase, “Hyde inn plane site,” which, of course, is standing in for “Hide in plain sight.”

I’ve seen FREE WIFI in puzzles a few times lately (including one that I constructed a few months back), and definitely was curious, before solving today’s, all of the funny ways that that could be clued…and we can add this one to the list (12D: [Hotspot that’s on the house?]). The clue for TORSO reminded me that the shape of mine is definitely much more shaped like an “o” than the “v” mentioned in the clue (35D: [Body builder’s v-shaped area]). Liked seeing the entirety of HAN SOLO in the grid compared to just one of the names being mentioned in many grids (7D: [Harrison Ford’s role in “Star Wars”]). My time to leave and get ready to cover a Major League Baseball game in person is AT HAND, but not before some MLB talk in the next graph (9D: [Within reach]).

“Sports will make you smarter” moment of the day: ECKERT (3D: [MLB commissioner between Frick and Kuhn]) – One of the shortest tenures by a Major League Baseball commissioner, William Eckert’s reign, from 1965 to 1968, came right in the middle of the height of social unrest in America, and Eckert’s decision to not cancel games after the assassinations of Martin Luther King Jr. and Bobby Kennedy in 1968 are probably the most memorable moments of his time as baseball commish. Eckert, a lieutenant general in the US Air Force,  served in the military from 1930 to 1961 and, during World War II, was assigned to Europe as commander of the 452nd Bomb Group in the summer of 1944.

I didn’t grok this theme until I got to the revealer and even then it was more of an “oh, OK” moment than an “aha!” realization. My pop cult education is somewhat deficient.

The theme answers are identified with *s. 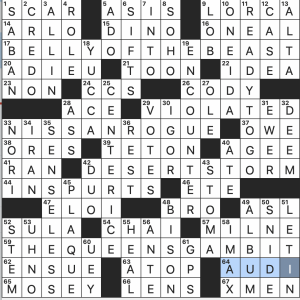 67a ties it all together: [Marvel comics mutants, four of whom can be found at the ends of the answers to the starred clues] is XMEN. It appears that BEAST, ROGUE, STORM, and GAMBIT are all part of the XMEN. There are lots more. OK, then. This is a perfectly fine Tuesday theme, which fell into place just fine despite the lacunae in my knowledge base. It doesn’t do much for me, and that’s totally on me.

What I didn’t know before I did this puzzle: well, the XMEN. I also didn’t know that New Mexico’s state flower is the YUCCA.

THEME: Rocks + things having to do with one’s body 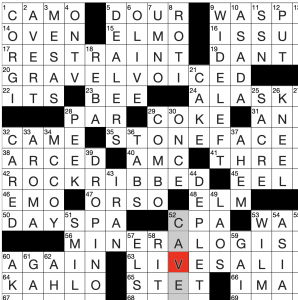 Didn’t fully appreciate this theme until now as I only assumed the first words shared anything in common. Finding rocks (minerals? I forgot my 8th grade earth science material) with body parts has to be a narrow theme type for sure.

That said, I’ve never heard of ROCK RIBBED. At all. A quick google says that it’s typically used in a political sense to describe uncompromising politicians… all the examples I see use Republicans. Regardless, it’s a fun term to learn, even if it’s a reminder of how ROCK RIBBED so many of us have become.

AMC at the center of the puzzle is a reminder that I’m champing at the bit to watch Better Call Saul now. I’ve waited a long time for this season.