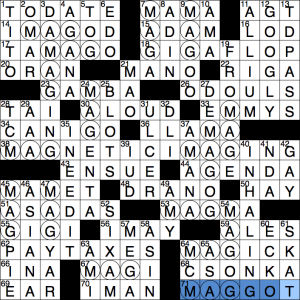 hello and welcome to episode #724 of matt gaffney’s weekly crossword contest, “So Many Letters”. for this week 3 puzzle, the instructions tell us that the contest answer is a well-known publication. what are the theme answers? well, there’s only one long answer in the grid, {Technology used by internists} MAGNETIC IMAGING across the center. that looks a little weird without either “nuclear” in front or “resonance” in the middle, but i’ll allow it.

so what is the theme? well, the two instances of MAG in MAGNETIC IMAGING, along with the instructions, suggest that we are looking for a magazine. the title further suggests that there are a lot of them, and indeed, the grid is absolutely chock-full of MAGs. how many? seventeen of them, to be precise, all reading either across or down. (i checked fairly carefully and i’m pretty sure there aren’t any on the diagonals, though it’s certainly possible i missed one; there is one stray GAM, i.e. a reversed MAG, in 23-across GAMBA.) since seventeen is itself a magazine, that’s the meta answer.

it’s striking to compare this meta to last week’s, as both involve stuffing the grid with many instances of the same trigram (in fact, very similar trigrams, with ARM last week and MAG this week sharing two out of three letters). like last week’s grid, this grid suffers somewhat in terms of fill quality, with somewhat weird entries like AGANA, the former name of guam’s capital (now called hagåtña), the variant spellings DEMAGOG and MAGICK, and the somewhat arbitrary {Megalomaniacal statement} I’M A GOD. so this was another situation where the crossword part of the contest suffered a little bit from the constraints of the meta.

i did enjoy the northeast corner, free of MAGs and thus able to support interesting entries such as the {Genus for onions and garlic} ALLIUM. as genus names go, that’s one that i’ve heard and used in actual conversation (about cooking), so it gets a big thumbs-up from me. {What many Americans will do today} PAY TAXES was also quite apt for a puzzle sent out on april 15—indeed, so much so that i assumed it would be thematic. (form 1040 is a well-known publication!)

as far as the actual meta goes, this felt easier than last week’s in that the trigrams we were looking for were always ordered and in a line, but i suppose it’s easier to miss entirely what you’re looking for, as last week’s had ARM itself in the grid, clued suggestively with respect to the theme, and this puzzle didn’t. it’s also a little funny that the mechanism leads to the answer simply by counting the number of instances of MAG, which is both less complicated but somehow less obvious than extracting letters from the crook of an ARM.