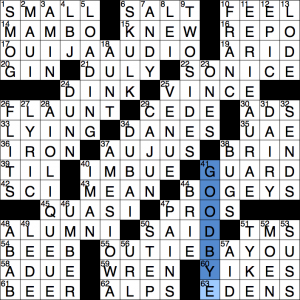 hello and welcome to episode #726 of matt gaffney’s weekly crossword contest, “One of These Things Is Not Like the Others”. for this week 1 puzzle of may (even though it came out on april 30), the instructions were entirely unnecessary. what were the theme answers? four ten-letter answers were arranged in a pinwheel pattern:

as you can see, each of the themers comprises two five-letter words, of which four are vowels and only one is a consonant. (BAYOU gave me some pause, but the pronunciation is essentially “bī” + “oo”, so it fits.) although that by itself doesn’t tell you the meta answer, there was a fifth theme entry lurking in the grid: {What our contest answer means} GOODBYE. that does indeed narrow down the answer to ADIEU. as an etymological aside, GOODBYE and ADIEU are not only synonyms, but they are derived from related phrases: GOODBYE is a contraction of “god be with you”, and ADIEU comes from “à dieu”, literally “to god” in french. (ADIOS is the same thing in spanish.)

serious scrabble players have memorized the words known as “vowel dumps”, which are words that use a lot of vowels and very few consonants. i’d say basically all of the commonly known 5-letter vowel dumps are used in this theme except perhaps AERIE; some of the others i’ve seen in scrabble but not crosswords include:

so there you go. next time you have too many vowels on your rack, drop one of these bad boys on the board, take your 8 or so points and draw 4 or 5 new tiles, and thank me later.

back to the puzzle. the instructions turn out to have been This week’s contest answer is a five-letter word that’s a common first guess in Wordle. interesting. i would not have thought that the instructions would be any more specific than “5-letter word”, but i suppose it makes sense as a tie-in to the story matt shared about the week 5 puzzle that refused to be made. (personally, i start with IRATE.)

i certainly did not know {Bassem ___ (33-year-old Egyptian who in 2012 became the sixth person ever to be both a chess grandmaster and also a physician)} AMIN, but it’s nice to have somebody other than one of history’s greatest monsters used to clue this particular name.

that’s all i’ve got this week. adieu!