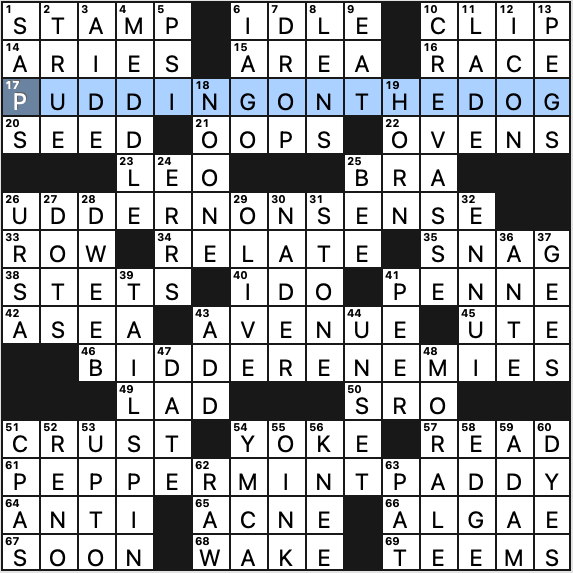 I was really hoping for something more from this, especially when I uncovered that first one and had no idea what the theme could still be. The second one—I have to admit—was a letdown. The title is on the generic side as well. It would be just as applicable to any theme involving double letters. Something a bit more on point would have been welcome.

Funny to see MEDDLE at 4d which has its own double-T counterpart, though it’s not part of the theme. Elsewhere CREVASSE is a fun word (sounds like a posh “crevice”), and TAILSPIN makes for lively fill.

Clue of note: 66a. [Plants with no roots or leaves]. ALGAE. Nice clue with its own little aha moment.

Hit and miss for me on the theme, but on the whole I wanted something more. Solid fill. 3.25 stars.

The theme reminded me of a scene from the BritCom I’m Alan Partridge in which radio host Alan, England’s favorite “dalendless shid,” upbraids a fellow DJ for swapping out Ds for Ts. 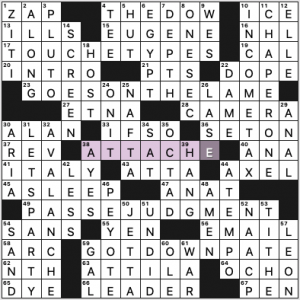 I figured somebody somewhere must’ve done this theme before, with the same revealer, because that revealer is perfect: 38a. [Embassy staffer … or a hint to 17-, 23-, 49- and 59-Across?], ATTACHÉ. Attach an é to the end of a word in each of those themers to make a new word, and clue the resulting goofy phrase accordingly:

Not only don’t I see any instances of thematic ATTACHE in the Cruciverb database, but the theme entries are kinda fun. A winner of a Wednesday theme!

Nobody’s excited to find ANAT. and OCTAD in a grid, I don’t think, but overall the fill is solid. Fave fill: AVALANCHE, THE DOW, PEYOTE, “LET’S PARTY!”

Four stars from me. Cheers! 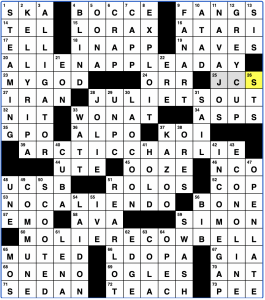 BEQ has this week’s AVCX Classic puzzle, and the tells you exactly what to keep an eye on:

The theme answers are all pretty standard crossword stuff – regular phrases with LIE inserted to make them a bit out-of-the-ordinary.  But keeping track of where the LIE is also turns out to be important for spotting down clues that are a little more…fabulous…than usual.  For instance, on ALIEN APPLE A DAY:

each of the down clues where LIE appears in its respective across answer has some untrue content.  It’s a cute concept, though some of the lies definitely work better than others.

Luckily, there’s enough meat to the clue that if you’re not fully paying attention, you can figure out what’s actually being clued, and there’s enough content to appreciate the lies once you realize what’s going on. 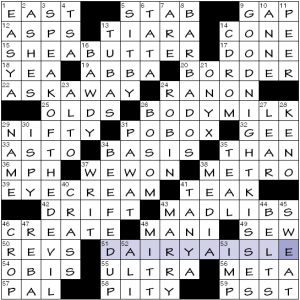 Not only is it smooth but it’s tight. Firmed and toned, you might say.

Pulling the grid together more literally are two vertical spanning entries. 3d [“We were just talking about you!”] SPEAK OF THE DEVIL, 9d [They’re given at bedtime] GOODNIGHT KISSES. 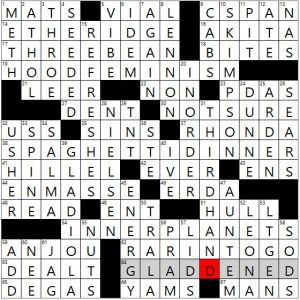 Two typos slowed my progress through this grid from Liz Gorski this morning, but on the whole an enjoyable puzzle with a distinct New Yorker vibe.

Still on vacation, slept in a bit today, so going to rush into notes:

May the 4th be with you! I’m covering today and tomorrow as well, so I hope that you enjoy these additional write-ups from me this week.

Another great puzzle today, with lots of bonus fill and a fun set a themers, and tricker theme as well. 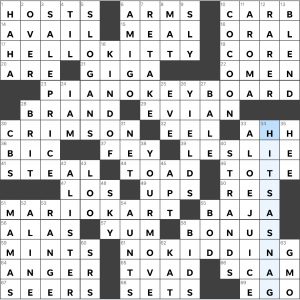 Theme: the two-word phrases in each themer are corrected by OK

Challenging theme for me today though the themer set is excellent. HELLOKITTY didn’t first come to my mind since while she classically wears red bows, she also wears a lot of other colors especially shades of pink. PIANOKEYBOARD filled in easily though felt a little clunky to me, given that I was typing “piano keys” which clearly wasn’t quite there but simple enough to finish once I was that far along. MARIOKART was the easiest of the themers to fill, as our family loves Mario games in general—lately Mario Party 5 on my old GameCube has been particularly popular at our house. NOKIDDING is another fun entry that I personally haven’t seen in a crossword so that was a great end to the themer set. There’s a lot of playfulness in the entries throughout this puzzle as well, which was really enjoyable today!

h/t to Sally and her blog post about today’s puzzle because I had a tough time figuring out the theme itself and still feel like there’s more to it, as titles usually have some hint. If you figured out more on this theme, please let me know in the comments!

Stumpers: GIGA (I was thinking more numbers instead of computer terms), TVAD (needed crossings), and CARB (good cluing though I usually don’t think of either in that way so it was one of the last filled)

Though the first third of this puzzle was difficult for me to get a start in, the rest of it started to fill rather quickly and my time was faster than first expected when I began. Though I still feel like a missing a little something for the theme, this was a fantastic puzzle and had an awesome grid that allowed for a nice solving flow. 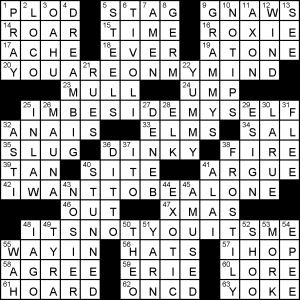 I’m not sure I fully comprehend this outré theme by Dr. Ed Sessa. The first three clues are [Dr. Jekyll, to Mr. Hyde] for YOUAREONMYMIND, IMBESIDEMYSELF and IWANTTOBEALONE; I can see them as conversations between two parts of a personality, though I don’t understand their directionality. The final entry’s clue is reversed: [Mr. Hyde, to Dr. Jekyll], ITSNOTYOUITSME. Again, I don’t quite see the significance of the inversion of the clue. Am I expecting to see too much?