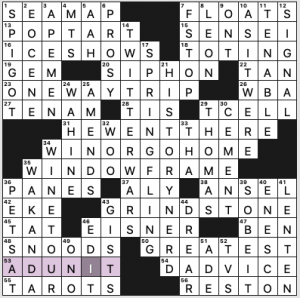 Another themeless grid with long staggered stacks intersecting in the middle, ample flow to and from the four corners. It’s harder to hit the skids when there are multiple ways to gain a toehold in every area.

Fave fill: POP-TART, ONE-WAY TRIP, “HE WENT THERE,” DADVICE (new to me, but wow, my husband has absolutely both given and received DADVICE!), WAKANDA (new movie in November!), WINE TOUR (anyone else see the 2019 movie Wine Country, with Poehler, Rudolph, Dratch, Fey, et al.? It was fun), TWITTER WARS (I abstain), and SPRING FLING.

Not entirely sure I’ve seen “WIN OR GO HOME” (34a. [Principle indicating “No second chances”]) before. Also less familiar: a SEA MAP, an AD UNIT, and a HISTORY NERD. Feel like history buff and maybe history geek are a bit more common.

3.5 stars from me. Onward to the weekend! 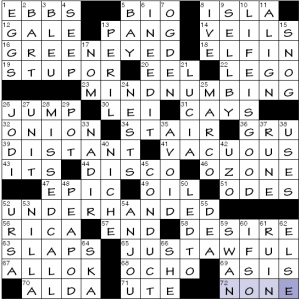 Neither first nor, I’d wager, the last time we’ll see a gramogram-themed crossword puzzle. This time it’s in the clues, which is probably the more common approach, as the essence of gramograms is their compactness.

Thematically, these are all disparaging adjectives, possibly in describing a person or their personality. So it’s more cohesive than I initially thought.

PERFORMER is the revealer at 59a [Entertainer, or a three-part hint to the shift behind 17-, 25-, 37- and 49-Across]. Re-parse it as PER FOR MER and you realize what’s going on. The theme phrases all originally had the trigram MER, but had it switched to PER to wacky effect. The upshot seems like a simple letter change, but the constraints are tighter since the MER trigram must be in place, and of course, the phrase must still have some surface sense after the change. 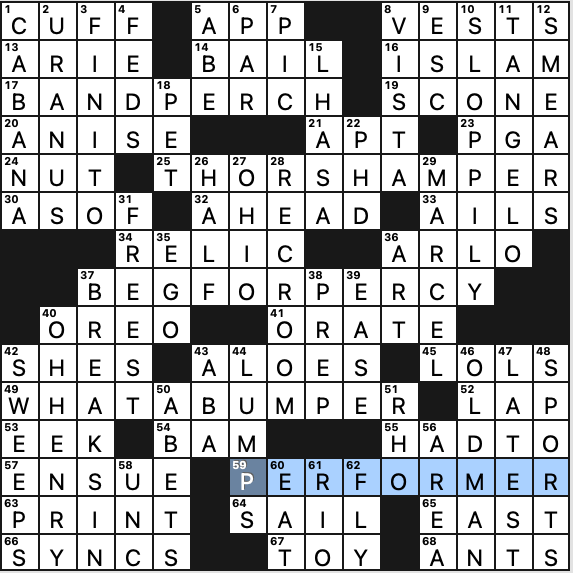 Sometimes a revealer’s re-parsing gets a little awkward, but this grid’s entries were enjoyable enough to make it worth it. And I definitely prefer a puzzle that has some basis for the theme when letter changes are involved.

Looking at the fill, we’ve got some big corners due to the 11-letter central themer. That CABANA/URANUS/FINITO stack in the NW is pretty nice as is TANGELO, SLOPPILY, REC ROOM, BREAKS IN, and OH HENRY!

Theme: Each theme answer includes a word suggesting multiplication, which is hinted at in the * of the puzzle’s title. 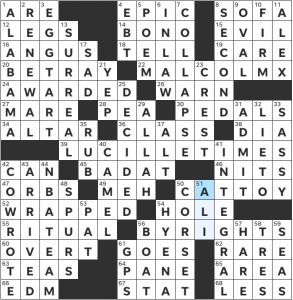 Many thanks to Sally Hoelscher for talking this theme through with me. Check out her write-up of today’s (and everyday’s) USA Today puzzle here.

My first thought seeing the asterisk is brought to you by my love of footnotes. I wondered if the asterisk was indicative of history often ignored or unknown, but with Sally’s help, I saw the mathematical angle. It’s a bit odd that the multiplication indicator appears at the end of both MALCOLM X and LUCILLE TIMES but at the beginning of BY RIGHTS, which I also found to be the trickiest themer just because I think it’s a difficult one to clue. Also – there’s a nice math-y bonus in seeing how INTEGRAL–which is not clued as in reference to its mathematical meaning but rather as 41a [“Vitally important”]–crosses two of the themers.

This is such a cool looking grid that felt so smooth in its fill. It’s asymmetric, which is not super obvious, save for the three blocks in near LUCILLE TIMES. It was really interesting to see the longer answers specifically on the left side of the puzzle. I was proud of myself for knowing that the Sixers are an NBA TEAM since I am not a big basketball fan (pairing them with the Knicks in 44d helped immensely).

Some other Friday faves from me:

If you’re interested in the history angle I mentioned above, Erik also left 42a [“Because of Them We ___ (Black history website)”] CAN almost as his own footnote, which I love. You can check it out here. Have a good weekend! 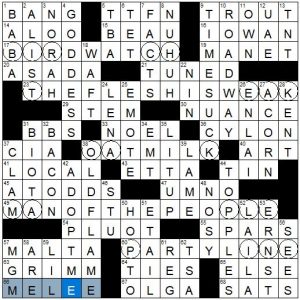 A fresh New Yorker with a classic theme style from Christina Iverson, whose cluing voice and grids make her one of my favorite constructors in the game right now — it’s not surprise she’s a regular at The Crosswords Club and is now assisting Patti Varol at the LA Times.

As mentioned, the classic theme: we’ve got the phrase “Wood siding” accompanying the puzzle (though not in the title, which I appreciate — titles are good but I find they have a tendency to spoil the theme for me), and each themer has a type of tree split across its first and last few letters:

Fun theme set and clues, though I have to admit the first two are my favorites, so the a-ha of the theme and the chuckle-worthy themers both came early.