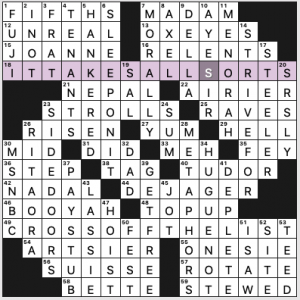 What what? An easier Saturday than Friday? We needed some harder clues here!

Fave bits: MADAM C.J. Walker, the neighboring judgments of YUM and MEH, “BOOYAH!,” CROSS OFF THE LIST, singer RITA ORA (that last name is such a gift to crossword constructors! she just needs to get some top-10 hits in the US to be familiar enough), HANKERED (I just like the word), SLEEP ON IT, HUGUENOT (I can tell you very little about Huguenots or Hessians aside from “they’re from European history”), and “SRSLY.”

Did not know: 44a. Nikkie ___, beauty vlogger with more than 13 million followers on YouTube], DE JAGER. She’s Dutch and became a professional makeup artist in her teens, Wikipedia tells me. It also tells me she competed on the reality competition show Wie is de Mol?, which some puzzle people are huge fans of and have watched despite not speaking Dutch. Here’s a video, if you’re curious, where de Jager makes up half of Adele’s face.

Four stars from me. A smooth and not-too-tough Saturday puzzle. 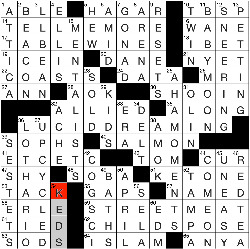 Uh oh. 2:38 this week, so that makes sub-3 on all three Patti-edited Saturdays and this was quite a bit under. I’m starting to despair that the “gentle challenge” in LAT’s updated Saturday specs means a lot more gentle than challenge. But I can forgive this puzzle for being easy because it has so much good stuff in it: 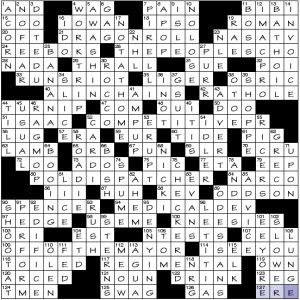 The theme answers in this one have ICE columns descending from them. They’re part of the original phrase, which is wackified by the absence.

And not entirely uncoincidentally, in the center is 67a [Crossword clue with a question mark, frequently] PUN.

Regarding PEOPLE’S CHO(ICE), this is based on real polling:

The theme is the sort of thing we see not infrequently, and this is a well-executed rendition. 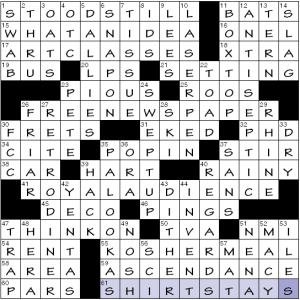 Whew! Another workout. Not quite as stumpery for me as recent offerings, but still a major challenge.

Last section to fall for me was the lower part of the northeast. For the mysterious 11d [Lone Ranger ring request enclosure] BOXTOP I had no idea and thought perhaps the Lone Ranger was the adopted moniker of a professional wrestler (hence ‘ring’) so I went with BOOT UP. This gave me ROUS for 25a [Predators of the lizards of Oz] and I envisioned a mashup or fanfic of Oz lore and the Princess Bride because People Do Such Things. Previously I’d considered ROCS but that went nowhere with crossings. So ROOS is the answer I don’t know if that indicates kangaroos or something fictional. Finally, 18a [More, for less?] as OTRA (Spanish for ‘other’) somehow seemed plausible after some of the other clues I’d encountered. XTRA. 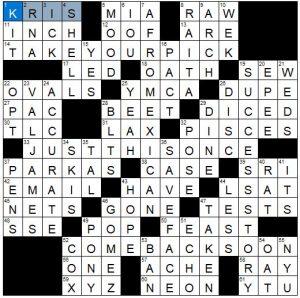 Our themers are common spoken phrases that are each three words of four letters long:

I struggled to move through this one due to limited connectivity from one side (NW corner) to the other (SE corner), and a high word count (78), but those are personal bugaboos. I appreciated the longer entries, as I often do in USA Today puzzles — SUCCESS STORY is particularly colorful, AFROMEXICAN [7d Like son jarocho music] provides me a YouTube rabbit hold for the day, and VAL JAMES a bit of hometown pride- more on him below. 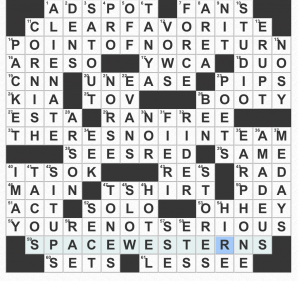 Really enjoyed all of the 14 and 15 letter entries in this one. Clued colorfully and enjoyable to uncover, especially THERE’S NO I IN TEAM which is delightfully funky looking in a crossword grid due to the double I.

I’ve never seen the SPACE WESTERNS “Firefly” and “Cowboy Bebop.” Have heard of both, though I admit I thought they were anime series. Google tells me that “Cowboy Bebop” is an anime actually, but I don’t see it tagged specifically as a “space western” on its  Wikipedia page (whereas “Firefly” does call itself specifically that).