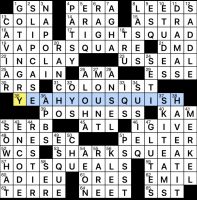 Theme answers consist of familiar food-item phrases that we don’t generally use to refer to food. What’s more, each entry’s clue is another familiar phrase of the form “___ food” used punnily as if the theme phrase was actually about food. Got it? 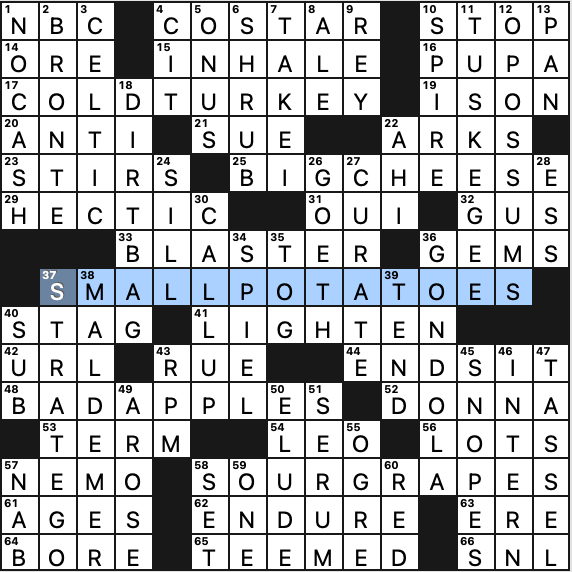 I really enjoyed this with all the wordplay going on at multiple levels. Fun entries and imaginative cluing make for a great pairing. Well done!

And the fill is on par with the theme. Plenty of fun entries all over the grid like DIRTBAG, TUSKEGEE, OPOSSUMS, STRATEGO, MAL DE MER (which I only learned recently from WSJ crosswords), GONDOLA, BLASTER, HECTIC, and SNOPES.

Fun puzzle all around. Four stars. 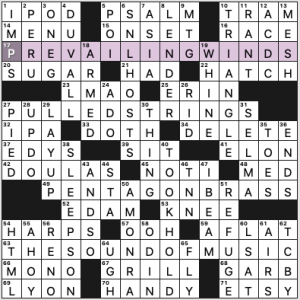 I like the three themers ending with categories of musical instruments, but I’m not sure that the revealer has a tight enough connection to hold them together. 63a. [Rodgers and Hammerstein’s “Do-Re-Mi” show, with a hint to this puzzle’s theme], THE SOUND OF MUSIC—STRINGS are not a “sound of music,” so 63a feels to me like a random 15-letter phrase ending with the word MUSIC. Would ORCHESTRAL MUSIC have made more sense, or less?

This was a smooth and enjoyable Tuesday solve. I didn’t know the song at the heart of the theme, and that was OK. 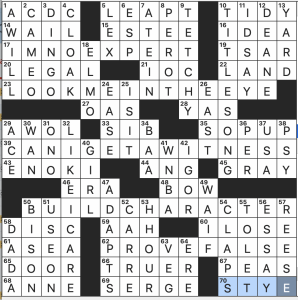 The revealer is in the middle: 39a [Marvin Gaye classic, and a hint to the last words of the starred clues] is CAN I GET A WITNESS. EXPERT WITNESS, EYEWITNESS, CHARACTER WITNESS, FALSE WITNESS. The starred answers and resulting combos are all solidly in the language. I know the phrase and have never heard of the song – clearly a gap in my classic R&B education.

Here’s Marvin Gaye, of course, and that’s what I didn’t know before I did this crossword. 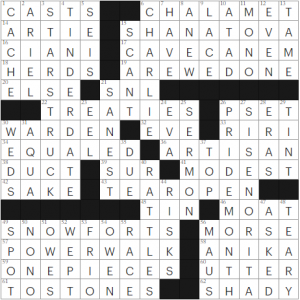 Billed as ‘moderately challenging’, this week’s Tuesday offering seems to me calibrated more or less properly. The solving experience was characterized by filling in large, cohesive clumps with a few gaps that needed to be worked in as additional bordering areas fell.

THEME: Common phrases that feature STATE + VERB where the verb is acting as a noun. 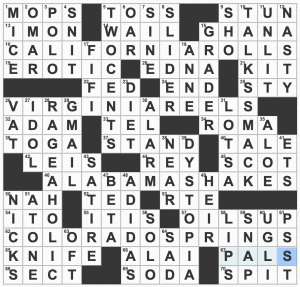 All themers are clued very straightforwardly, which I don’t understand at all. Especially when we’re trying to emphasize the verbiness of the phrase (per the title). Like, why not [The Golden State goes through revolutions?] for CALIFORNIA ROLLS? Or [Old Dominion stumbles?] for VIRGINIA REELS? [The Cotton State quivers?] and [The Centennial State leaps?] seem fun and interesting enough for the last two (though I’m not sure ALABAMA SHAKES is familiar enough a base phrase… Googles very well though… I’m awful with band names). The way it is presented feels so… unimaginative which is juxtaposed with a rather interesting set of themers.

So the theme just sat there. I had more fun with the fill, which was more difficult for me than usual. Had no clue Minnie Mouse had a dog that wasn’t Pluto. FIFI! (not FIDO, which I had assumed initially after the FI- appeared). Other new-for-me moments included OMAR Ilhan, ANNE Geddes and the scary sounding RAGEAHOLIC.

And if you don’t think SeniorITIS is a thing [Senior follower?], trust me… IT IS. Man… I was able to get through a whole two pages of Young Goodman Brown with my (regular level) seniors yesterday before their attention was completely sapped period 9.

I think Judge Lance ITO has left the building. I wish he would stop appearing in crosswords. He hosted an embarrassing circus of a trial decades ago, and that’s all he’s known for to the general public. I vote to delete him from the constructor dictionaries.

Some good moments, but this puzzle is slightly south of what it could’ve been imo. 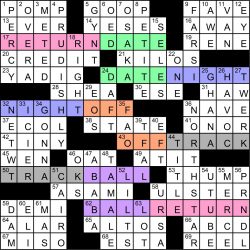 Hello there, everybody! Hope all is well with you lately and that you’re staying warm and toasty…especially to those who are in places where springtime weather has yet to settle in just now.

One of the most special, and oddest, gifts that I’ve ever received was when I was given a TAMALE by the mom of a high school student I was tutoring and helped her improve her SAT score (48D: [Cornhusk-wrapped cantina fare]). If I received a tamale for every time I helped a kid out, I might have made tutoring a full-time gig! A very pleasant earworm formed after completing my first entry of my solve, PERCY (1D: [“When a Man Loves a Woman” singer Sledge]). Normally, I love when Africa is represented in a grid, like what happened with CAIRO (51A: [Sight of Egypt’s al-Azhar Mosque]), but having to put in GHANA has me in a rage because its national soccer team, a.k.a. the Black Stars, defeated Nigeria in the final round of qualifying to make it to the World Cup, and at Nigeria’s expense (25D: [Accra’s nation]). OK, I better go to a grocery store and THUMP a few watermelons to release some of this tension (53A: [Check a watermelon for ripeness]).

“Sports will make you smarter” moment of the day: NORTH STAR (36D: [Nautical guiding light]) – The perfect entry to reimagine with a sports clue for the unsuspecting! The National Hockey League team currently in Dallas, the Stars, was founded in 1967 in Minnesota as the Minnesota North Stars. The North Stars were one of the six teams that came into existence when the NHL first expanded, from the Original Six teams (Montréal, Toronto, Detroit, New York, Chicago and Boston) to 12 teams. The North Stars made the Stanley Cup Final twice during its time in Bloomington, Minnesota, in 1981 and 1991, with the 1991 team particularly remarkable because it finished 12 games below .500 yet still made the championship round. (They eventually lost to the Pittsburgh Penguins in the final, in six games.) After the 1993 season, the team relocated to Dallas and, sadly, one of the great logos in sports history was no longer an active one. Long live Mike Modano and Bill Goldsworthy! 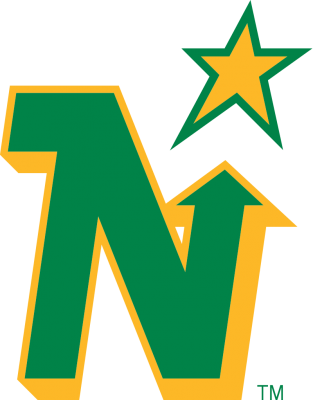 Extra tasty puzzle today with the most delicious theme and themers plus an overflow of bonus fill. Nothing better—except maybe the fantastic grid! 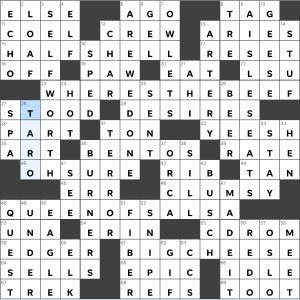 Theme: the end of each themer phrase is a part of a taco

It’s been forever since I’ve had HALFSHELL oysters (which may have to be remedied soon!) and in my opinion are best o’natural. WHERESTHEBEEF took me a few crossings to get though I remember the ‘90s slogan “Beef—it’s what’s for dinner” more. QUEENOFSALSA filled in last of the themers, though I certainly recognize her by face (and amazing moves!), if not by name so I need to work on that. The excellent cluing for BIGCHEESE gave me pause (due to the paws!), as usually “cheese” is not something I associate with dogs. Overall, a fabulous theme and themers!

Also, the first and fourth themers have two words and the second and third have three. What a fun bonus!

This stellar grid allowed for so much wonderful bonus fill and delightful entries! Though not on our menu tonight, I still got my fill of tacos today! Who doesn’t like a Taco Tuesday?