The revealer is HOLES IN THE WALL (48a, [Dingy bars, or what the circled letters can help fix]). The other themers are familiar phrases with circled letters that spell out items needed to repair a wall. 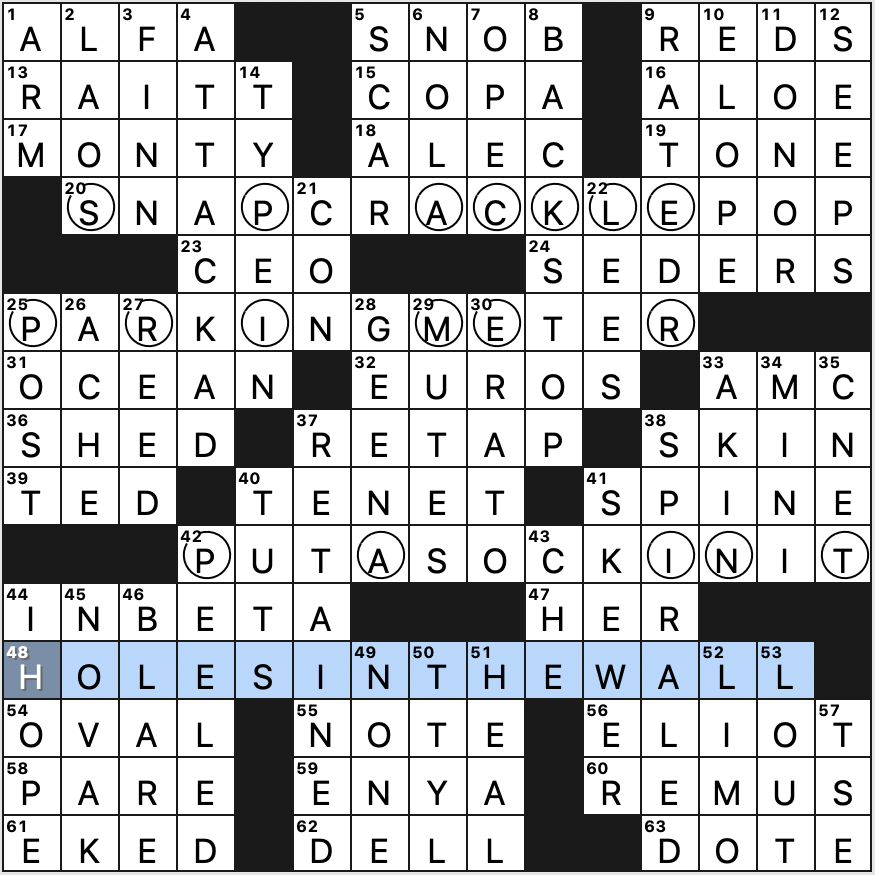 Pretty straightforward Monday theme, and I like the wordplay in the revealer (plus the fact that it reminds me of one of my favorite movies, Butch Cassidy and the Sundance Kid).

I admit that I want a repair job to take as few steps as possible, so I’ll generally look for a way to not have to use primer. But I’ve also been fortunate enough over the years not to have to contend with very large HOLES IN THE WALL. By the way, if you don’t want to rely on a crossword for DIY advice, here’s a nice little video on repairing drywall.

ATTACK AD and BACKSTOP top the fill. Not so keen on RETAP. 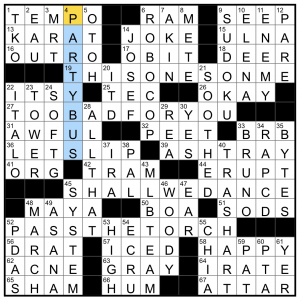 Hey friends! I solved this puzzle in a cloud of hangar steak and shallots and champagne and crispy potatoes and chocolate lava cake so take everything I say with a grain of salt. Solving music was this.

Actually, I don’t really have Big Picture thoughts beyond “haven’t we seen this before… like, recently…..?” so let’s just do bullet points. 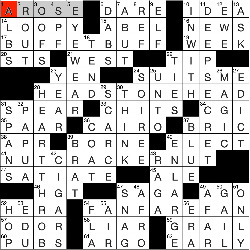 I noticed two things about this puzzle within the first ten seconds. First, the byline was a nice surprise: I associate “Bywaters” with “clever and fun.” Second, that 1-Across, AROSE, gave me a little deja vu, since it’s my starting word in Wordle.

Anyway, this puzzle is a delightful throwback to the days when “Monday” didn’t always mean “revealer.” I think the theme is pretty self-evident without one: In each two-word theme entry, the first word is a compound in which the second word is the first syllable of the compound, and also those second words are all some kind of synonym for “aficionado.” Like so:

I enjoyed having a Monday theme that’s easily graspable and yet not made of very common in-the-language phrases, so my comment on 28A is a quibble. Smooth grid with a minimum of proper nouns, too. 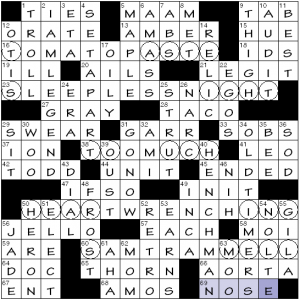 Bracketing each of the longest across answers is one of the traditional five senses. To help us out, the grid has those letters pre-circled.

Among the other physiological senses that are recognized, the most notable is proprioception. This theme works, however, because of the cultural persistence of the ‘five’. Further, these are all external senses, which seems appropriate as they are at the extremities of the entries in the grid. I have no idea if this was intentional, as it isn’t made explicit anywhere; benefit of the doubt dictates that I should consider it so.

The last across entry is tantalizing: 69a [Rudolph’s is red] NOSE. It’s the organ most associated with the sense of SMELL, and that’s the closest theme answer! If that could have been accomplished for the other four themers, this crossword would have been superlative. 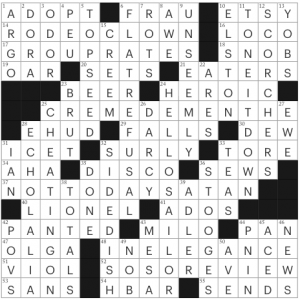 Ooh, a tough one, as advertised. Last Monday’s New Yorker puzzle wasn’t nearly as challenging as this one—and this one puts up a fight, which is what I’m looking for in a “hardest of the week.”

First off, let me say that I appreciate the SEWS clue, [Secures a weave, say]. That’s the sort of thing that is likely to be much more familiar to Black solvers than to others (it’s about hairstyling), and I like that the puzzle isn’t assuming a white audience resistant to references that don’t cater to their background.

Fave fill: RODEO CLOWN, CREME DE MENTHE (halfway expected this answer would be the name of an insect pigment, but no, our grasshopper is the minty cocktail), “NOT TODAY, SATAN,” ECHOLALIA, CHEATING ON, Art BRUT, SIDE DISH, a FLAT REFUSAL, the STOOGES, and TONE IT DOWN.

Did not know: EHUD of the Book of Judges, H-BAR that’s the [Symbol used to represent the reduced Planck constant].

Congrats Kelsey, on her print debut! This puzzle has a kind of unsettling asymmetry, where things are just slightly off. It looks like the type of crossword the Other Mother would solve in “Coraline.” That is, of course, a compliment. 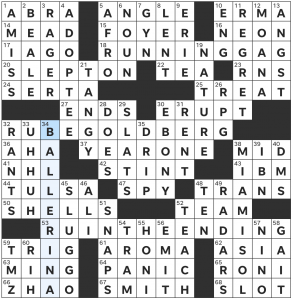 Here we have three phrases which have the word RUG bookended– RUNNING GAG, RUBE GOLDBERG, and RUIN THE ENDING. The former was my favorite, and had me thinking of what my favorite running gags are… The chicken dance on “Arrested Development” springs to mind.