Today’s theme answers STRETCH THE TRUTH (54a, [Exaggerate, and a command followed three times in this puzzle]). Each one is a familiar word or phrase that contains the four letters FACT somewhere within. In each case those letters are doubled, thereby taking up twice as much space in the grid. 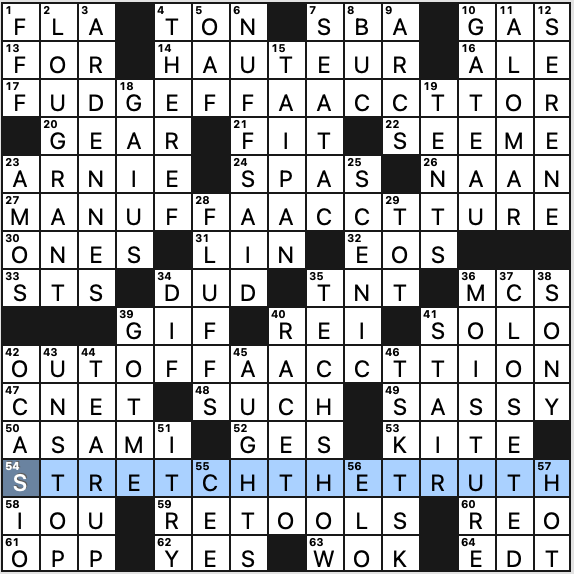 I imagine if this was in the NYT, they’d figure out a way to have those key letters actually stretch across two squares each. But this worked well enough for me, and the theme did its job by helping me fill in the lower two entries. I’m imagining someone taking liberties with the facts, and that seems to match up well with this theme.

Stan Lee is famous for saying ‘NUFF SAID, so I happily thought of him and my comic-book-reading days when I uncovered that entry. Also good: LOU GRANT, TECH SHOW, and Alexandria OCASIO-Cortez. If you wanted to get your French on, you could enjoy the ARDENNES, GATEAU, and HAUTEUR, which is entirely new to me. On the staler side, we find AS AM I crossing I TRY at the I. Meh. 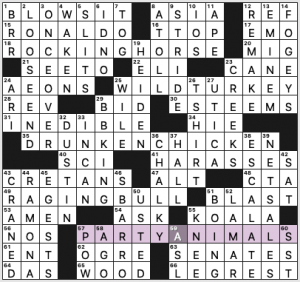 Theme revealer: 57a. [They’re always ready for a good time … or a description of 18-, 25-, 35- and 49-Across?], PARTY ANIMALS. The four themers start with words that can relate to partying and end with animals: ROCKING HORSE, WILD TURKEY booze, DRUNKEN CHICKEN, RAGING BULL. I wouldn’t use “raging” about a party but then I’m middle-aged.

Alternative to DUSTIN Hoffman, who might be a little icky(?): Screenwriter Dustin Lance Black, whose latest project is the Hulu true-crime limited series Under the Banner of Heaven. 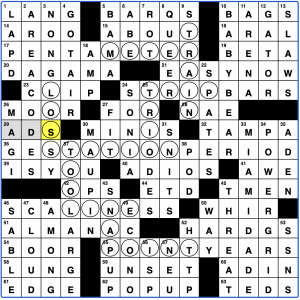 Byron Walden has this week’s AVCX Classic, and it’s a 2/5 in difficulty?  This definitely played easier than his usual puzzles for the venue.  Let’s look at what unites all the circled squares in the grid:

Yes, we’ve got an interconnected GRID of words that can be proceeded by POWER (POWER LINE, POWERPOINT, etc.), inside our interconnected grid of words.  Impressive work!

Editor: Erik Agard
Theme: Each theme answer begins with MA and ends with IN

Hi folks! I’m back from vacation and ready to jump back to blogging, and what a lovely puzzle I get to start with! 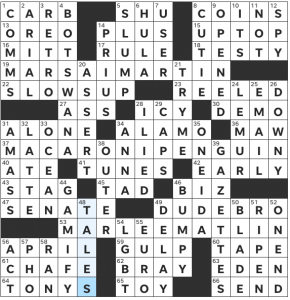 Classic USA Today theme today executed expertly by Will. Two of the theme answers were completely new to me – MARSAI MARTIN and MACARONI PENGUIN – and yet I still finished in a pretty average time, and learned some cool things to boot. USA Today in general does a great job of incorporating things that haven’t been seen in every other crossword before while still keeping puzzles easy, and it’s very refreshing to see (take it from me, somebody who really has to scrape for interesting things to say at times about each of the NYT’s Monday puzzles). I did know MARLEE MATLIN, although more from growing up in a family of “The West Wing” fans than from either of the productions mentioned in the clue. 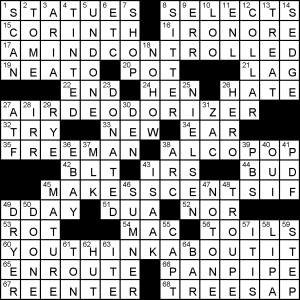 Some by-lines always excite me to see. In the LA Times, Robin Stears is one who always exudes attention to details. Today’s puzzle is one of the less popular varietals – the quip theme. Like usual, I solved around the quip, which didn’t make the puzzle as frustrating as that technique is wont to do. The quip works better than most, as it has a few layers to its central mom joke. The only part I still don’t get is what it has to do with “climate change”. Anyway, AMINDCONTROLLED / AIRDEODORIZER / MAKESSCENTSIF / YOUTHINKABOUTIT. It’s an “air deodorizer” so it makes scents, and as it’s mind-controlled, it does so when you think about it.

There weren’t too many tricky spots in the rest of the puzzle, which is a good design choice for this kind of theme. I liked the [Neither here nor there], ENROUTE clue / answer pair. ALCOPOP and PANPIPE were my other favourites of the medium-length answers. There did feel like quite a few longer names, but I personally only struggled with FREEMAN, but managed to guess it, with the last letter being that F.

This entry was posted in Daily Puzzles and tagged Byron Walden, Michael Paleos, Robin Stears, Samuel A. Donaldson, Will Nediger. Bookmark the permalink.