Theme entries are familiar two-word phrases where the first word ends in _ME and the second word starts ME_. As hinted at by the title, the two MEs are combined into one. 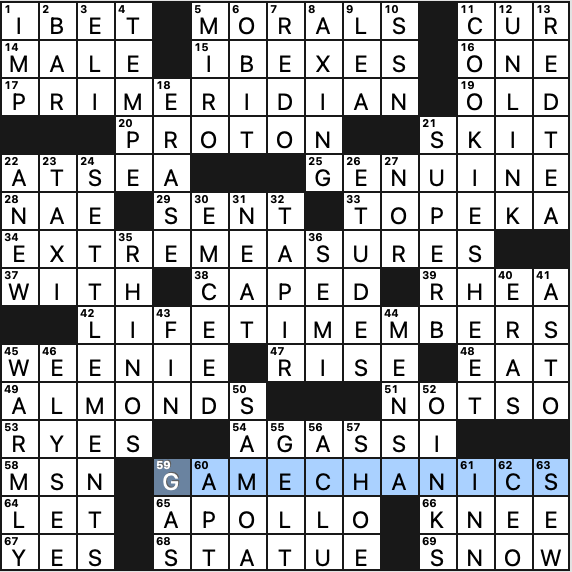 Pretty quick to grok this one if you kept the title in mind when you uncovered just one theme entry. But it still took me some doing to uncover each themer since the second words didn’t immediately pop into mind even knowing they started with ME. But each one is solid and well chosen. I especially like the last theme answer. 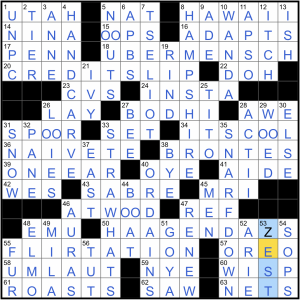 This is Ross Trudeau’s 50th puzzle in the Times – congrats Ross!  Once it clicked what was going on with this one, I really enjoyed the theme:

each of the theme answers is better expressed using an UMLAUT — ÜBERMENSCH, NAÏVETE, BRONTËS, and HÄAGEN DAZS.  Appropriately, the square directly about each letter that should have an umlaut features a double O — OOPS, SPOOR, IT’S COOL, and author Margaret ATWOOD.  I caught the rebus squares early on, but understanding why they were there at the end of the puzzle was a great lightbulb moment.

Look, we can’t discuss umlauts without BJÖRK.  It was either this or Blue Öyster Cult.

Editor: Erik Agard
Theme: Each theme answer’s only vowel is I. 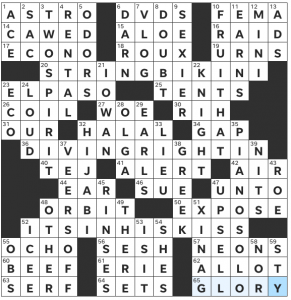 Fabulous puzzle from Brooke today, with one of the more interesting black square patterns I’ve seen in a long time. Look at those side pyramids!

I loved all three of the answers Brooke chose. They’re all fun evocative phrases, and long enough that the fact that they only have I’s is actually interesting. I didn’t know that there was a trend of wearing STRING BIKINI tops upside down, but Refinery 29 tells me it’s a real thing, so I’ll believe it.

Most of this puzzle absolutely flew by for me – I finished all but two crossings in 3 minutes. The two that were sticking points for me were TEJ/HIJABI and EXPOSE/XINAG, both of which are tricky but fair. I’ll blame my slowness there on solving immediately after waking up. Also, I only know TEJ as the Hungarian word for “milk”, which certainly didn’t help me with its clue of [Ethiopian honey wine].

The black square pattern I mentioned earlier allowed for some really cool long answers – TWO SPIRIT, PIANO SOLO, VEERS OFF, FRUIT HAT. I also liked seeing VLOG, HALAL, and UPSELL spice up some mid-length slots. My favorite clue in the puzzle has to be 60a [Major complaint] for BEEF, because I always enjoy seeing widely used but not widely clued meanings of words.

Appears to be a debut for Matt Westman! Congrats!

THEME: Underground places are found at the “bottom” of common phrases (which run vertically in the puzzle) 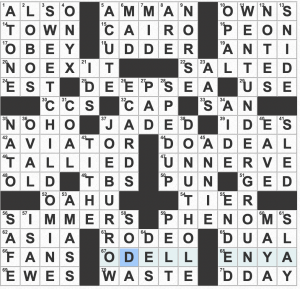 Cute, simple theme here. Enjoyable! Especially since (and I know I’m going to make more than a few people cringe) JOE BURROW is an unknown name to me (braces self for the virtual tomato pelting), but the theme helped me figure it out… I was also unfamiliar with Scott O’DELL, but it wasn’t a Natick for me with the synergy of the theme.

One odd discrepancy is that the definition of MINE (the part of speech even), is completely altered from the base phrase to the meaning of MINE as the theme would have us interpret. The same is not true of HOLE, where it’s a noun and its basic definition is intact in both the base phrase and the context of the revealer.

I’m not familiar with the phrase DO A DEAL! How have I gone this long without hearing it?! There’s even a good E.L.L. breakdown that I found in order to help one differentiate DO A DEAL from “Make a deal.”

[“Out of thyme” for anyone except a chef] is a cute clue for PUN. Though I doubt any chef would be able to say that and resist the chance to make a show of the obvious punny nature of it.

A fine, over-the-plate debut from Matt today. Thanks! 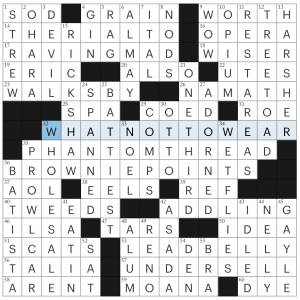 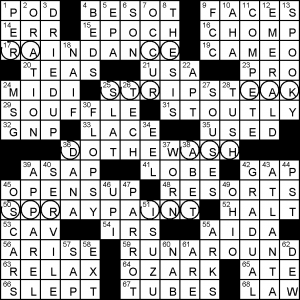 Lynn Lempel’s name is typically associated with the beginning of the week. Today she shows up on a Thursday, with a puzzle with fairly tricky clues, but a basic enough theme. The revealer is RUNAROUND and sure enough, synonyms for RUN are found around four entries:

The general feel of today’s puzzle was one built around accessible answers rather than splashy ones. We get [Light baked dish], SOUFFLE, which is fun to say and a proper name clue for [“Promising Young Woman” writer/director Fennell], EMERALD. Other than that, the only surprising angle I saw was clueing SOUSES as [Makes soaking wet], when I think more typically of drunkards?

Byron Walden’s Fireball Crossword, “Give It a Whirl” – Jenni’s write-up

Sorry for the late entry – it’s a little crazy around here right now. I don’t think that’s why I struggled with this one so much. Today’s offering definitely lives up to the “Blazingly Hard” FB tagline. I solved it on paper as Peter recommended and stared at it for a loooong time before any light dawned, and even then it was only a dim light.

There are three types of clues: Across, Down, and Inward. Inward? I tried reading those backwards which didn’t work, and I belatedly realized that since 6 is one of the Inward clues, reading that backwards was really going outward. And there are five unchecked squares including one in the middle. Once I figured it out, I was really impressed. It’s an amazing construction. Sometimes there are feats of construction that leave me cold because they’re not fun to solve. This one was fun. A lot of fun.

Here’s Peter’s grid so you can see the puzzle in all its glory: 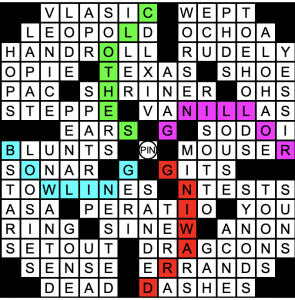 It’s a PINwheel! The Inward clues are the themers:

This puzzle is flat-out brilliant.

What I didn’t know before I did this puzzle: never heard of GERI, the Pixar short about an old man who plays chess.

(Sorry for the late write-up folks. It’s been a crazy week for me).

Theme: The beginning and ends of each theme answer forms a shell made from the name of a company. 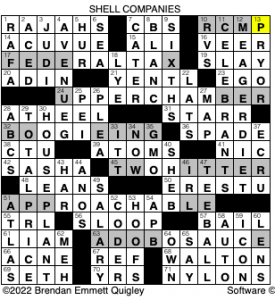 I thought that this was a super fun theme. I really enjoyed BOOGIEING and ADOBO SAUCE, the latter of which made me hungry. As a baseball fan, I was here for TWO HITTER, but at first had ONE HITTER, which would have also been a “well-pitched game.” 34d [‘This very second!’”] NOW quickly made me realize the error of my ways. Plus – bonus baseball answer – 47d [“Sport with no catcher”] TEE BALL was a fun aha moment.

19a [“One-up everybody at open mic night, maybe”] SLAYed me. I thought that that was a really fun answer, and it crossed CELEBRANTS and MEAGER DIET, the upper right counterparts to TOTAL PRICE and HOUSE PLANT. As always, I struggled with names, but I imagine that some of that is the result of having so many theme answers.