Theme: Each theme answer is a common phrase in the form of “[verb] LIKE A [animal]”. The theme clues are structured the same way as well. 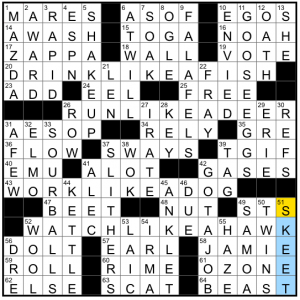 Every time I see Lynn’s byline, before I even solve the puzzle I know I’m going to get a clean puzzle with a solid but probably not earth shattering theme, and that’s exactly what we’ve got here today. Honestly I’m surprised this theme hasn’t been done before, since the phrases fit together so well, particularly the last two. DRINK LIKE A FISH did make me slightly uncomfortable, as in my life I’ve only heard that phrase used in a worrying/unsafe behavior context, so it’s not a fun phrase to me. Overall, I wasn’t crazy wowed by the theme concept, but it’s solid, and newer solvers will be helped out by getting to drop in the “LIKE A” section of each answer even if they haven’t figured out the rest yet.

Today’s fill highlights include SHAKE UP, SOURBALLS, and GOOSE EGGS (is it inelegant to have another animal in the grid here? I personally don’t mind). The clue [Pita sandwiches of deep-fried chickpea balls] for FALAFELS threw me off at first, because I think of falafels as being the chickpea balls themselves as opposed to the entire sandwich, which might be a “falafel wrap” or something like that. The only section of fill I really don’t like is that LAIC/IRMA/RIME area, which I think could definitely stump solvers on any of those crosses. There are also an impressive number of rare letters in the grid with regards to J’s, Z’s, V’s. I don’t actively like these letters anymore than others, but their presence indicates that the grid includes words not completely overused in puzzles, which always makes a puzzle more memorable.

Hope everyone had a great weekend! 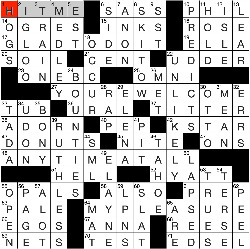 I need to be brief today, but then this theme doesn’t require a lot of explanation. The theme entries are all answers you might give when thanked, all clued as [Response to “Thanks”]:

I hate to say it since the constructor and I were puzzlemaking partners for quite a few years, but this theme doesn’t do it for me at all. It’s so straightforward that it belongs in Newsday on a Monday, although entries like ELAYNE Boosler (at least the Y is crossing a theme entry in a way that makes the I implausible fairly early on) and K-STAR would have disqualified it there.

I will apologize in advance to the constructor and you all for the brevity of this post; I’m rushing to catch a plane. This appears to be a debut, and it’s a pleasant Monday puzzle.

Each theme answer is a known (if not well-known) phrase that starts with a word that is the name of a MARS rover (63a, [Where to find the first parts of the asterisked answers]). 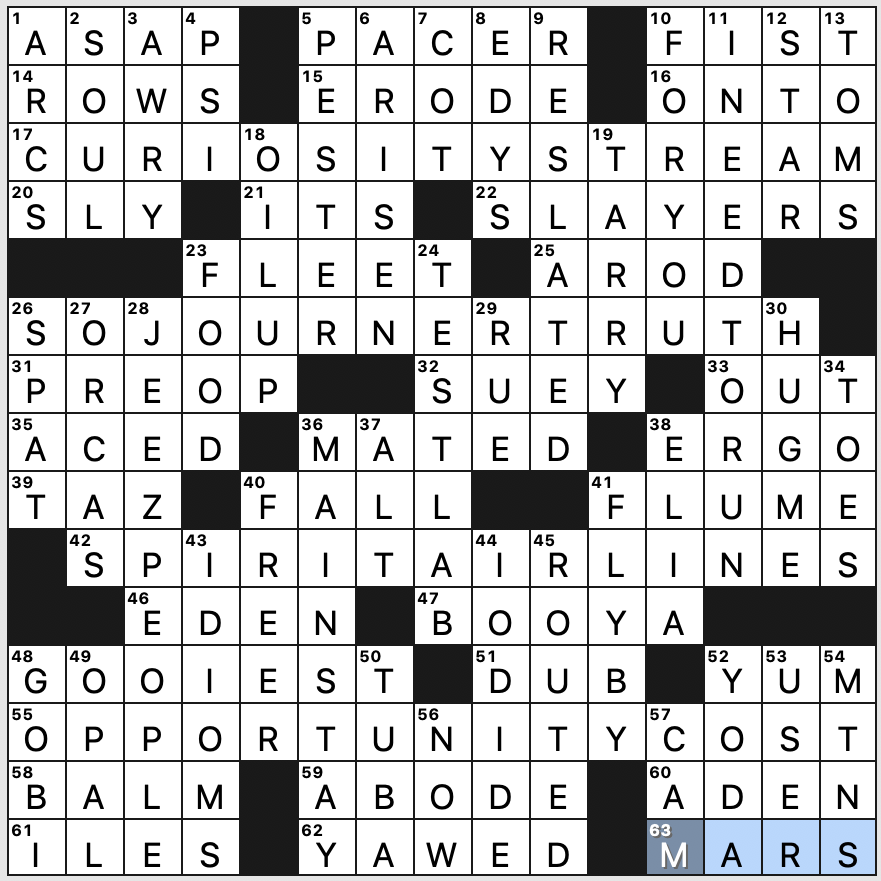 Very nice. I’m not familiar with the first one but I think I may have heard of it. The last one is definitely new to me, but sounds legit. I still want it to be OPPORTUNITY LOST though.

Fill is nice with MAINSTAY and “JEEZ, PEOPLE” though I really wanted “JEEZ LOUISE”. As for the other long Down…I NEED TO RUN. 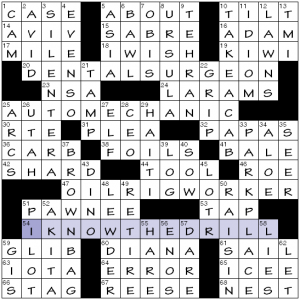 The title seems to me to promise something more than what is delivered. The pun half-references the clue for the revealer and also the theme entries, but somehow feels lacking. As if there were a Venn diagram for puzzle and title that has significant overlap but not enough to be interesting? Don’t know quite how to characterize it.

But enough with relative superficialities, eh?

Do you see what I mean? Or is it just me who feels it isn’t sufficiently cohesive in light of the title?

The puzzle: I liked it but didn’t love it. 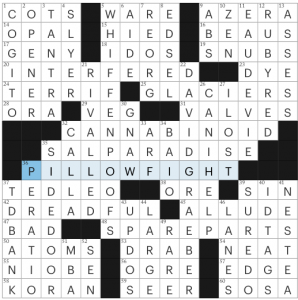 Tough like a Saturday NYT, but not super-tough. The fill seemed maybe not as zippy as the usual Natan grid—he’s usually a bit SLYER.

Did not know: 22d. [Anthropologist who developed the concept of everyday communism in “Debt: The First 5,000 Years”], DAVID GRAEBER.

Best clue: 36a. [Battle waged with weapons in some cases], PILLOW FIGHT. Pillowcases! 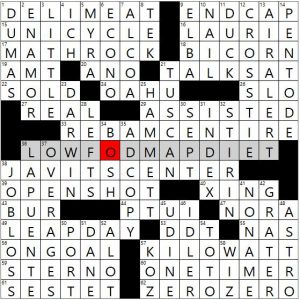 Jokes aside, UNICYCLE instead of “clowncar” at [15a Circus vehicle] was a heck of a trap, and it took me a while to get going, as MYRA [5d Hart who co-founded Staples] and ICH [4d ___ glaub’, mich tritt ein Pferd” (German title for “National Lampoon’s Animal House”)] didn’t come nicely at all. The German title translates to “I think a horse is kicking me”. Despite obviously not being a direct translation of “National Lampoon’s Animal House,” I still got plenty hung up. DELI MEAT [1a Sub standard?] is a fun clue adding difficulty to that corner, as well.

Didn’t realize that MATH ROCK was a punk genre, but goodness knows BEQ knows more about that than me. Some room for geography buffs today, with OAHU clued to Hanauma Bay on its southeast corner, some NYC neighborhood trivia connecting Hells Kitchen to the JAVITS CENTER, and reminders that ELBE and UDINE exist in the real world — in Livorno and at the foot of the Venetian Alps, respectively — and not just in puzzles. A pair of hockey clues after some wonderful playoff games this weekend in ON GOAL [56a Headed for the net] and ONE TIMER [60a Slap made on a moving puck], though the former could be soccer, as well.