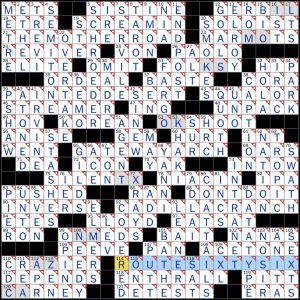 As soon as I saw this puzzle’s title, I put on “Go West” by Pet Shop Boys and got to solving. Highly recommended!

So, we’ve got a geographically-depicted tribute puzzle to ROUTE SIXTY SIX, where a number of the entries from the NE to SW corners of the grid depict the states through which the route travels. And, along the way, we have some landmarks noted in the longer across entries. I don’t usually go for tribute puzzles, since the theme sets tend to feel incomplete or random, based on whatever entries have the correct number of letters, but I appreciated the extra touch of the state abbreviations + Grant PARK and the Santa Monica PIER as the termini, all geographically placed in the grid. Overall, it might not be my favorite type of puzzle, but I certainly appreciate the constructor’s approach and multi-leveled theme execution.

Three random thoughts:
– How did “Get your kicks” not make its way into this puzzle somehow? That seems like a decent omission for the theme / tribute.
– 5D: SCHROEDER [Character seen on a keyboard] – This reference to “Peanuts” was a cute misdirect!
– This puzzle’s clues seemed to skew on quite the terse side, which made the solving experience less joyful for me. I guess I tend to like more texture, punnery, and variety. Your ROUTE SIXTY SIX mileage may vary.

That’s all for now – I hope you’re doing well!

Theme: Each theme answer contains two words, both of which can go before the word “bills.” 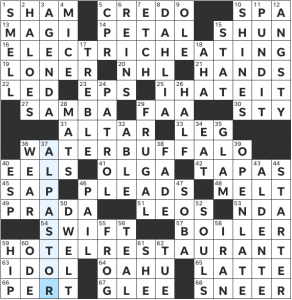 While no one necessarily wants to be reminded of the bills they have to pay, this was a really well-executed theme, and I enjoyed it quite a bit. Naturally, I was pumped to see the BUFFALO BILLS mentioned. None of the answers felt contrived though, and I loved that BILLS could be applied to both words. That’s so clever.

Thanks for reading, folks. Have a good week!

Theme: Types of bread are “broken” by a black square separating groups of circled squares. 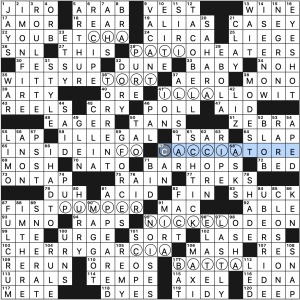 Very nice. I like the international flair here. We have Indian, Mexican, German, and two Italian breads. Fun choices and some nice finds here. I’m doubtful anyone actually uses the term FIST PUMPER, but I’LL ALLOW IT.

There’s good theme density as well, but that doesn’t seem to hamper the fill which I found to be quite enjoyable, even if there aren’t any long marquee entries. Those upper stacks of “I’M ON FIRE” / ROULETTE and “I SEE NOW” / NEGRONI / and EYESHOT are quite nice. Also, TACO BELL, ALL-STAR, G-FORCES, “I HAD TO,” FULCRUM, “I’M THERE!,” and SCHTICK (even marked as a “var.”) add to the fun.

Simple but well-executed theme. Smooth fill all around. 3.75 stars.

THEME: The first letter of common phrases is moved to become the last letter. Wackiness abounds., 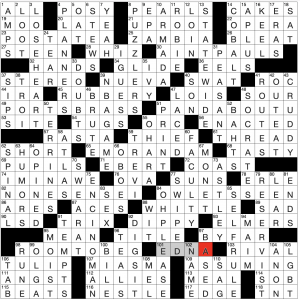 An excellent presentation for [Those who really enjoy solving crosswords] PUZZLERS. A simple enough theme- very easy to grok- but surprisingly (and enjoyably) difficult. I uncovered “AIN’T PAUL’S!” first- my favorite of the themers- and thought “easy-peasy!” But no. That one just happens to be easier than the rest because the altered phrase sounds similar to the base phrase, SAINT PAUL. The rest are wildly different. Like, NONE, SENSEI sounds nothing like IN ONE SENSE, etc.

It is also very Birnholzian in two senses:

I really flailed in the fill. I’m going to blame it partly on my groggy mindset this Sunday morning after a very busy Saturday. But I never felt like I had a solid foothold. Oddly enough, PUZZLERS was one of the more difficult entries for me. However, once I figured it out, it got me out of a big jam up there.

A handful of new-to-me names in this one (EDNA, OLGA, ROBIE). And an excellent Knock Knock joke involving an interrupting cow that I didn’t see coming.

A PLUS from me. This was really well done.

THEME: Superheroes who shake the “Man” part of their name can be found at the “front” of common phrases. 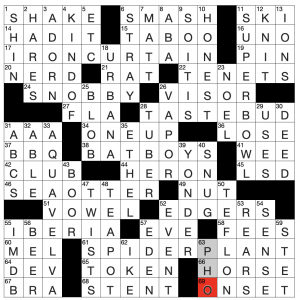 An extremely smooth solve for this delightful 15x. But, of course, “smooth solve” is practically synonymous with “Lynn Lempel.” I love how clean and simple this theme is.

I’m a tad surprised at the layout of this one. TASTE BUD and SEA OTTER are in the traditional spots for themers, and they certainly look like themers… two words… the correct length. But no. They’re wannabes. You have to look for the asterisk in this one, which I frequently don’t pay attention to. 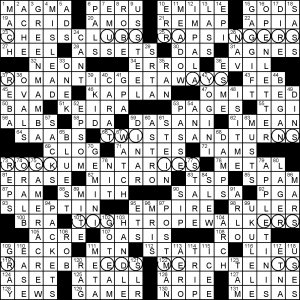 Hands up if you guessed most of the theme based on the titles and circled squares? Anyway, Zhouqin’s theme today features circled letters that spell out big four US sports team nicknames. Brace yourself for gratuitous plurals…

In general, an easier puzzle, with the most difficulty coming from off-beat choices for proper nouns: