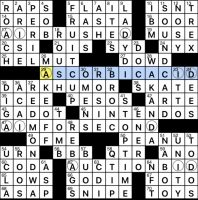 The themers this week have all the help they need, with the way they’re surrounded by AID:

The theme consists of four grid-spanning sayings that could aptly be applied to a tightrope-walking ACROBAT (6d, [Performer on a wire, as described by 16-, 26-, 43- and 55-Across]). Only the last phrase originated from the acrobatic performance, and thus it seems to serve as a second revealer. 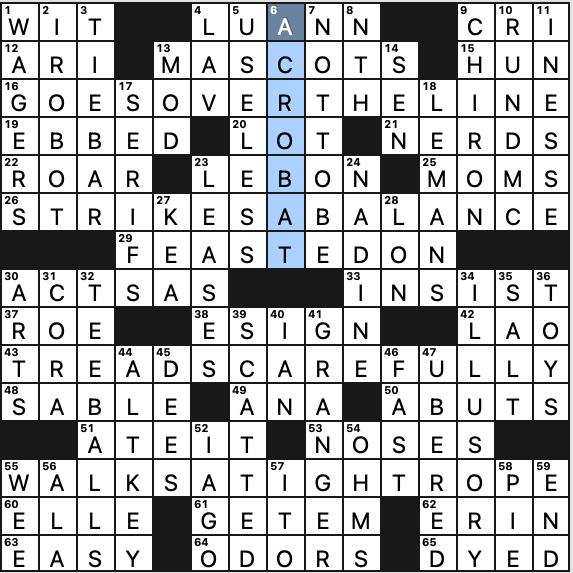 An impressive set. I like the consistency; each phrase is very much in-the-language, and each is in the third person present tense. The first three use gentle puns, and as I said, the last one feels like another revealer, getting the point across. With the ACROBAT standing vertically in the middle of the grid (and crossing two of the themers) and with the grid having left-right symmetry, it feels like the visual element was just as much on the constructors’ minds as was the wordplay. All in all, a careful, well-balanced effort.

Though the theme lays plenty of constraints on the grid, any difficulty found therein is mostly the result of challenging clues. There are nice entries like CHIRON, RUN DMC, TEE-BALLS, ILLUSORY, MASCOTS, and Hermione GRANGER. Where I slowed down was when I encountered proper names like Nobelist NADINE Gordimer and baseball manager Alex CORA or the crossing of Latin IN ESSE and French CRI de coeur. Otherwise, the fill is quite smooth.

An impressive construction with some pleasant wordplay. Four stars. 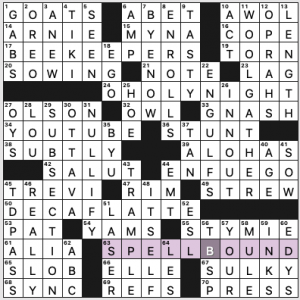 Cute theme. The revealer is SPELLBOUND, 63a. [Entranced … or what one can do by reading the starts of 17-, 24-, 34-, 44- and 50-Across in order?]. Those five entries begin with BEE, O, YOU, EN, and DE- (BEEKEEPER, O HOLY NIGHT, YOUTUBE, EN FUEGO, DECAF LATTE). I’d like it better if the D word/phrase started with DEE and not an un- prefix. Bonus points, though, for having BEE in a SPELLing puzzle. The Scripps Bee returns to TV on June 1-2!

Surprised to find a SOW ([Female hog]) in the same grid as SOWING. Sheesh! Change that W to a P for SOP and STREP and nobody gets whiplash. There’s also the repeat in YOUTUBE and YOUR.

Surprised to see these ones in a Tuesday grid, since they’re not all that easy: ALIA, OTTAVA rima (!), and regional brand EDYS, which won’t be familiar to half the country. 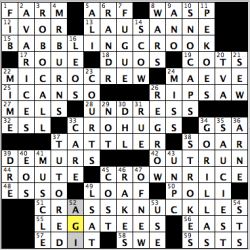 Good day, everybody! Here is hoping you’re all doing well at the beginning of the new week.

We don’t turn back time to before the common era, but there is a lot of B.C. action in today’s grid, as the theme answers are all phrases that are altered when one of the words, which normally starts with a B, is changed to a C, changing the meaning of the expression entirely.

Struggled a bit to finish the grid — though AGI (52D: [Form 1040 fig.]) should not have been too much of an issue — as the LEGATEES entry was harder than I thought to entangle after a couple of wrong guesses I made in my head (55D: [Beneficiaries]). Also initially put in “barn” instead of FARM to start as well (1A: [Place with sowing machines?]). From the stack of 8s in the Northwest and Southeast, ROBOCALL was definitely the best of the bunch, even if actual robocalls are the worst (3D: [Automated phone annoyance]). Bless you if you had a “Kiss My Grits” flashback when putting in MEL’S (27A: [“Alice” diner]). In case Flo from the Progressive ads isn’t your cup of tea, then Flo from Alice is more down your alley.

“Sports will make you smarter” moment of the day: COURTS (23D: [Wimbledon venues]) – Of all of the courts at the All England Club, Center Court, obviously, is the most storied and recognizable. For many years, however, Wimbledon’s Court No. 2 earned a long-standing reputation of the site of many upsets, so much so that it was nicknamed the “Graveyard of Champions.” Tennis greats and former Wimbledon champions who played on Court 2 and lost to unranked players at Wimbledon include a who’s who of tennis royalty: Evonne Goolagong, John McEnroe, Jimmy Connors, Virginia Wade, Pat Cash, Michael Stich, Andre Agassi, Conchita Martinez, Pete Sampras, Serena Williams, Venus Williams and Martina Hingis. The old Court 2 is no more, as it was demolished before the start of the 2011 tournament.

THEME: Types of rocks can be found when combining the first and last few letters of common phrases. 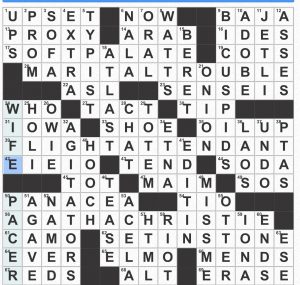 I’m predisposed to dislike puzzles that require circles, as this one does, when published by Universal. They only offer circles to solvers who are familiar with this site, where they can download a proper version for Across Lite. The masses get a subpar version because Universal’s software can’t handle circles. I don’t know how they’re fine with offering two versions of their puzzle, but they are (I have yet to see a novice solver easily grasp the concept of counting letters in order to understand the theme). As far as I can tell, the “counting letters workaround” only calls more attention to Universal’s comparatively lacking software.

That said, this puzzle is very nice (and the stones are easy enough to spot without the aid of circles to someone who knows where to look). All of the themers were enjoyable to uncover. Okay… MARITAL TROUBLE was a little bit of a Debbie Downer, but who doesn’t have MARITAL TROUBLE now and again? AGATHA CHRISTIE was a big (but fun) gimme. I just started watching the Death on the Nile remake.

Most impressive was stacking of the north-most and south-most themers without compromising fill.

New to me: PANACEA (I feel like that shouldn’t be new to me, but it is) and HOLI. 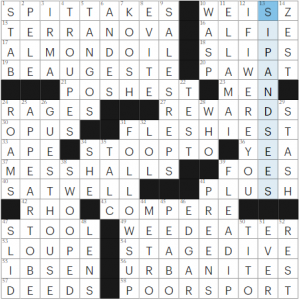 For this week’s ‘moderately challenging puzzle’ Patrick Berry delivers a super-smooth grid which flows from one section to another really easily.

The highlight without question is the quad stacks of nine-letter words in the northwest and southeast—all of the entries are excellent.

Many fun clues there. There are also double-stacked tens vertically crossing these, no mean feat, but I wasn’t as taken with those.

That’s all I’ve got for this nice-to-get-the-morning-started crossword.

A fun puzzle today with a fantastic theme and themer set, plus an awesome grid! 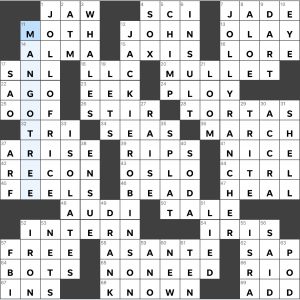 Theme: each two word themer phrase starts with J for the first and R for the second, the abbreviation for junior (jr.)

With the themers being in the downs, I had many crossings in each before I got to them so all filled easily for me. Though the cluing fact is new to me, I’ve heard of JOLLOFRICE before but not had it yet; clearly that needs to be remedied asap and will a taste test, as the different styles are quite unique and both sound fabulous. Let me know in the comments if you have a preference! My favorite JOLLYRANCHER is blue raspberry, which is a tricky favorite since it dyes your tounge a vibrant blue; as a kid, when I went through the lunch line after having a blue lollipop, the lunch lady was extremely concerned with my purple lips (tinted blue so looked pale purple). Glad to see the baseball great JACKIEROBINSON in this set, fitting the theme nicely.