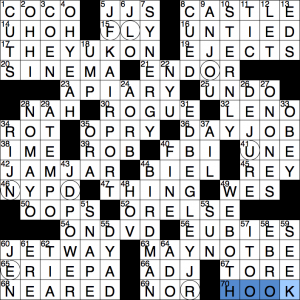 hello and welcome to episode #728 of matt gaffney’s weekly crossword contest, “Scale Down”. my apologies for forgetting to blog last week’s puzzle (and thanks to matt for filling in!). the three-hour shift in deadline somehow had the effect of throwing me totally off, as i spent tuesday morning thinking “i’ve got plenty of time to figure out and blog this week 5 puzzle” and then after lunch, i totally forgot to come back to it. oops. beautiful puzzle though, and i really wish i’d figured it out.

anyway, for this week 2 puzzle, we were told that the contest answer was something you might do while solving a meta. what were the theme answers? the only explicitly indicated themer was the final across answer: {Crossword great Henry…or one of eight you’ll need to catch the meta} HOOK. i believe this marks the third installment in the henry hook tribute series at mgwcc, and matt has frequently mentioned how henry (who passed away in 2015) was a role model of his. henry has been on my own mind of late, as i’ve recently taken over what used to be one of henry’s regular gigs making sunday crosswords for the boston globe.

anyway, how does the meta work? well, based on the connection of HOOK, the title, and the word “catch” in the clue, we’re talking about a fish HOOK. (“scale” as in fish scales, and “down” because they’re below the surface of the water. it’s a bit of a stretch on both ends, but i enjoyed the double-barreled pun.) the eight HOOKs in the grid are the eight instances of the hook-shaped letter J, and indeed we go “down” from each one of them to look at the letter right below the J. they’re all circled in the screenshot above, and the letters below them spell out FLOUNDER, which is both the name of a fish and (as a verb) something you might do while solving a meta. i hope you didn’t flounder too much with this week 2, though, as it’s a fairly gentle mechanism.

eight J’s is way more than the usual number (between 0 and 1) you’d expect to see in an average 15×15 grid, so even if you didn’t immediately make the HOOK = J connection, there was plenty in the grid to tip you off, especially with some of the not-usually-seen-immediately-following-J letters occurring in FLOUNDER. i’ve seen JFK in grids many times, but never JFK AIRPORT. J-LO is a frequent guest in the grid, but rembrandt van RIJN and J.D. POWER less so. and i’ve heard of {Six-time “St. Elsewhere” Emmy nominee} ED BEGLEY JR, but only from the simpsons.

other bits and bobs:

that’s all for me.