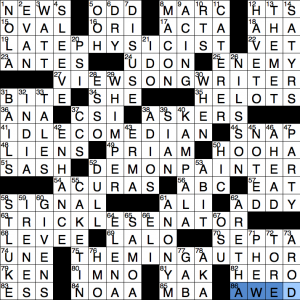 hello and welcome to episode #730 of matt gaffney’s weekly crossword contest, “Just Putting It Out There”. for this week 4 puzzle, we are told that the contest answer was a famous athlete whose name is 12 letters long. okay. what are the theme answers? there are six long across answers:

so what’s going on here? each themer is a two-word phrase where the second word is a profession. in addition, the clues have parenthetical numbers. based on the wording of the instructions, it seems likely that the number is the length of the name of a notable person in that profession, since we’re looking for a 12-letter athlete. but what does the first word have to do with it?

certainly, IDLE COMEDIAN suggests eric IDLE of monty python fame (and a few notable non-python projects). but there aren’t famous physicists named LATE or songwriters named VIEW or anything like that. THEMING AUTHOR called to mind ernest HEMINGway, who shares that six-letter substring with THEMING. on the other hand, there’s no senator named RICKLE- anything.

oh, but look—the T in THEMING is the last letter of ernest, so the full name ernesT HEMINGway (15 letters) contains THEMING. that must be relevant. and vermont senator paTRICK LEahy (12), the current president pro tem of the senate, contains TRICKLE. this must be what’s going on here:

so this is definitely what’s going on. but what’s the next step? i would think we would extract a letter from each of these themers to make a new 6-letter word, which we would combine with the prompt in the instructions (12-letter athlete) to solve for the meta answer. this might require looking elsewhere in the grid for an answer that connects to each of our six famous people.

33-down TALES is an anagram of TESLA, and that’s interesting, but there are no 9-letter entries, so LETTERMAN and HEMINGWAY have no anagrams in the grid.

i also looked for entries that might use the “extra” letters in the person’s name (e.g. niko/sla for nikoLA TEsla, or ernes/way for ernesT HEMINGway) but didn’t find anything. another idea i had was to use the initials (NT, SW, DL, CM, PL, and EH) but nothing there, either.

what about the title? i don’t exactly see what it has to do with the part of the theme mechanic we know about so far—maybe it’s a very indirect allusion to the fact that the first theme word is just “out there” in plain view in the person’s full name. or maybe it suggests we should be doing something with the “out there” bits, i.e. the outer parts of the names that we haven’t used yet: NIKO/SLA, STE/ONDER, DAV/TTERMAN, CLAU/ET, PA/AHY, ERNES/WAY. again, though, i don’t know what to do with any of that.

or maybe “putting” is an inflection of putt, rather than put, so we’re looking for a 12-letter golfer. the only notable 12-letter golfer i could find with any six-letter string of interest reading across their first and last names was ARNOLD PALMER, who has an OLD PAL. although that’s an interesting find, it’s a little different because OLD PAL is two words rather than one (and the space is also in the same place as in ARNOLD PALMER—though it’s still pretty cool because neither OLD nor PAL bears any etymological relation to any part of ARNOLD PALMER). but it might be a worthwhile guess if i don’t find anything better in the next few hours.

oy vey, i have found it, and this was not obvious: there precisely six two-word clues:

these clues have the same initials as the six people in the theme: NT, SW, DL, CM, PL, and EH. taken in theme order, the first letters of the answers to these clues spell out OLD PAL, so the answer is indeed our old pal ARNOLD PALMER.

well, i got there eventually, but it was a workout. how’d this one treat you?