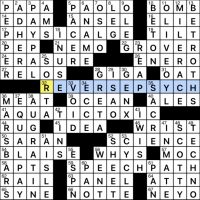 Hello! This week we’re removing the suffix -ology from some phrases and allowing hilarity to ensue: 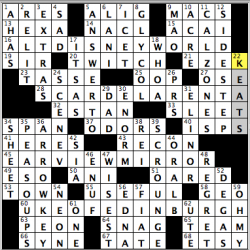 Crossword Nation puzzle solution, Week 574: “The WORD is Out!”

Good day, everybody! I hope you all are well. I am sure that a number of you reading this space either has been a member of the armed forces or know someone in your family who was/is an active duty member, and I absolutely want to express my gratitude to those who have served and to those who served who are no longer with us. Thank you.

Today’s edition may not leave you speechless, but there definitely are places in the grid where you are left without finding the right words…as in, the first letter in each of the four themes are removed from its originating phrase, though the newly-formed puns still make sense with their clues. When those four omitted letters are combined, they form the word… WORD.

We see a few more long, non-themed entries in this week’s puzzle compared to last week, and seeing CALZONES makes me wonder aloud how I have yet to have one despite having almost everything else that any legitimate pizza shop can offer (11D: [Cheesy turnovers made with pizza dough])? Today’s solve was a case when reading a clue for one answer totally threw me off for another, as after putting in SCENE V (24D: [Part of Act I in “Macbeth”]) made me think exclusively of Shakespeare when I saw the clue for TOWN (53A: [Hamlet relative]). “Wait a minute! Claudius doesn’t fit in this space!”

“Sports will make you smarter” moment of the day: OH MY (59D: [“Heavens!”]) – One of the all-time great sports broadcasters of all time was the incomparable Dick Enberg, who’s remembered mostly for bis work doing play-by-play for NBC Sports from 1975-1999, as well as being the voice of UCLA’s men’s basketball team from 1966-1977, during which time UCLA won eight of its 10 national championships under legendary coach John Wooden. The reason I mention him in this space is because of his trademark phrase that he would use when calling outstanding plays and moments during sports games: “Oh, My!”

I enjoyed the humorous title. It’s not referring to religious guys, but famous (men’s) last names paired with a rhyming type of cloth. 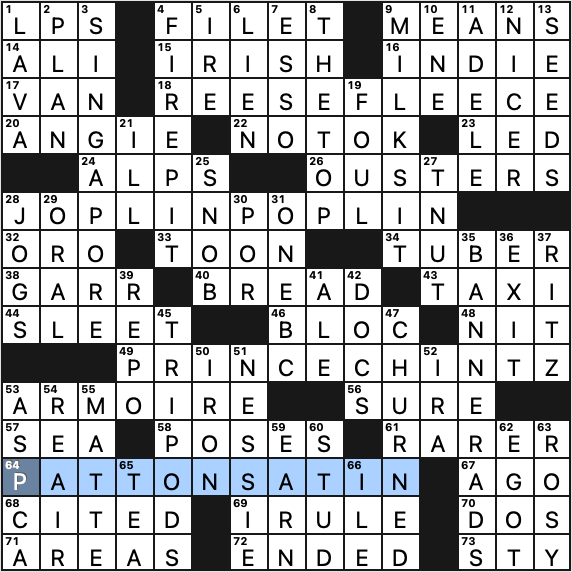 To be honest, I wasn’t too sure about this theme as I was solving. But once I finished and glanced at the title, the penny dropped and I smiled. Cute. My only NIT would be how all these men are from decades long past. Hal Prince only died in 2019 but his major works span from the ’60s to the ’80s. Everyone else is older than that.

In the fill I liked SINGAPORE, FIRE PIT, NESSIE, and ARMOIRE most of all, with BANNER ADS and TRIPODS up there as well. I’m on the fence with MILKS IT; it’s an interesting phrase, but it looks odd in the grid without context.

Clue of note: 65d. [Some like it hot]. TEA. I figured this clue could go with a lot of things, but the answer definitely makes sense.

Turn up the tunes today! A delightful puzzle filled with entries, clues, and a theme that sings. Lots of fun! 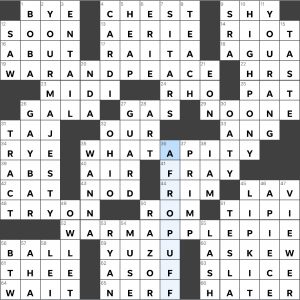 Theme: Each themer is a three-word phrase with each word, respectively, starting with W…A…P…

A classic novel, WARANDPEACE remains on my to-be-read list though I better get to it sooner than later before watching the clued the electropop opera that it inspired. WHATAPITY is a fun phrase for this themer set. WARMAPPLEPIE was also always served with a slice of extra sharp cheddar cheese in my family, though it also makes me think of American Pie.

Another layer to the theme today is the reference to CARDI B’s song “WAP” (the title track on her 2020 album), featuring Meghan THEE Stallion, both of whom appear as entries. A controversial song with lots of commentary about it, one particular article argues why it is feminist and contextualizes its importance within the music scene.

Stumpers: LAV (needed crossings but now know him and will be adding his films to my watchlist), BALL (took me crossings today, despite the solid cluing), and NOONE (kept thinking “none” until crossings made it clear)

Great bonus fill and even some related entries, including the rappers and a couple of hairstyles. I also really enjoyed the asymmetrical grid, which opened up so many possibilities and additional entries. This puzzle certainly makes me WANNA dance—and blast tunes—a perfect start to the day! 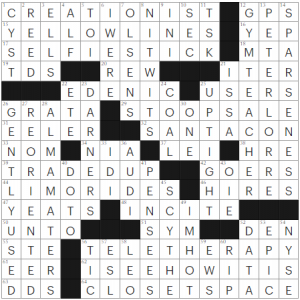 ‘Moderately challenging’ is the rating here, and I feel it’s accurate. I enjoyed the experience.

Since there were those long acrosses to start of the grid in the northwest, I shifted to the shorter ones in the northeast and was able to start right away with 12a [Device that might calculate an E.T.A.] GPS and 18a [N.Y.C. agency whose logo is designed to look like a train rushing by] MTA. I do have a fondness for its two-toned predecessor as well. Wouldn’t have needed those crosses for 13d [“M” star] PETER LORRE, and from there it was pretty much off to the races.

Wow. It’s been a minute since I solved the LA Times. I think I’ll jump on board more often. Let’s just say things are notably different. 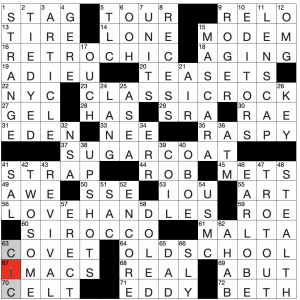 I thoroughly enjoyed this. So simple. So clean. A little ageist perhaps! I’m starting to feel OLD SCHOOL myself, and I rather enjoy some CLASSIC ROCK now and again. AGING even makes an appearance in the fill. Thanks for that!

It felt so smooth along the way to boot. New to me were SIROCCO (who else entered MOROCCO?) and the  CIC initialism (commander in chief). Also the manga series LONE Wolf and Cub. But I don’t think I know any manga series. 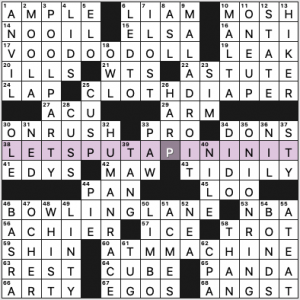 Oops. Spent Memorial Day bingeing shows about time travel (Dark on Netflix, Undone on Amazon Prime Video), so is it any wonder that I didn’t realize that Monday evening means blogging the Tuesday puzzle?

The theme is held together with the revealer, 38a. [Suggestion to defer discussion … and what might be said of 17-, 25-, 46- and 60-Across], LET’S PUT A PIN IN IT. (I’ve heard the phrase but it’s not one I use.) The four themers are things you stick pins in: VOODOO DOLL (straight pin), CLOTH DIAPER (with a diaper-specific safety pin, not a straight pin!), BOWLING LANE (bowling pins), and ATM MACHINE (PIN number—and please, no bitter complaints about ATM machine and PIN number being redundant, since both are well within the language now). Nice that all four of the pins involved are different from one another.

Nice grid (though I’m not a fan of NO OIL as an entry), nice clues. Overall vibe, four stars.