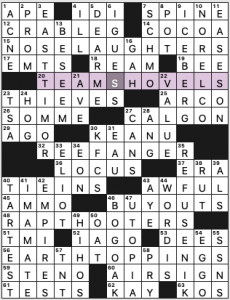 As the title suggests, the heads of each word in the base phrases move to the back, forming new words. The resulting phrases are clued accordingly:

Favorite clue: 47d. [Place where you’re free to do puzzles all day, to some], UTOPIA. We would also have accepted HEAVEN.

We’re looking for fictional detectives today as hinted at by the Holmesian title. Theme answers are familiar(ish) words and phrases that feature a single circled letter. Change that letter according to the revealer’s hint, and you’ll find the surname of a detective created by the author identified parenthetically. Said revealer is in two parts: CLUE / ME IN (66a, [With 67-Across, “I need a hint” and a hint to uncovering four famous detectives]. 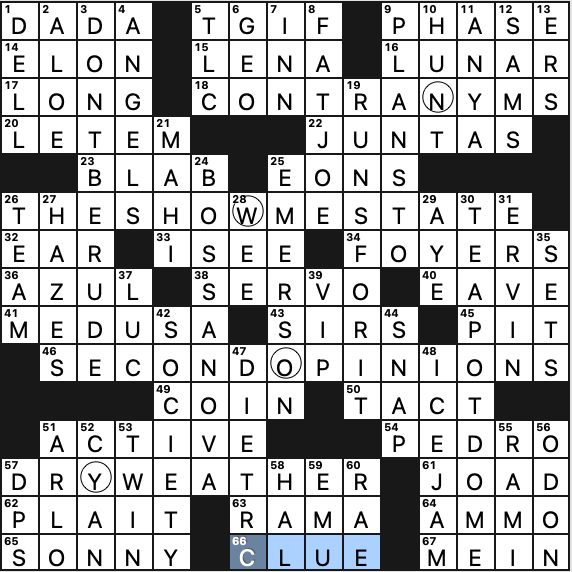 This was fun to unpack and sort out. It didn’t help not knowing some of the names, but I view that as more of a gap in my knowledge base than a fault with the puzzle.

But don’t you think it’s a bit weird that we need a CLUE to find the detectives? Shouldn’t we use clues to find the criminals?

Aside from that, this was fun and definitely different than the usual rehashed fare.

Looking at the long fill, we have “DON’T BE RUDE,” RUNS FOR IT, BOSSA NOVA, and TEAPOT DOME. A very nice collection. I didn’t know the rapper FAT JOE [“The Elephant in the Room” rapper] and with it crossing another proper name LENA [“A Raisin in the Sun” matriarch] at the A, that might give people pause. An I seemed like a possibility in that square, but the A definitely seemed more likely. I wanted ICE DAM for the clue [Winter river flow blocker], but the crossing of JOAD made it clear it should be ICE JAM. If you never read The Grapes of Wrath, that was probably another tough crossing. 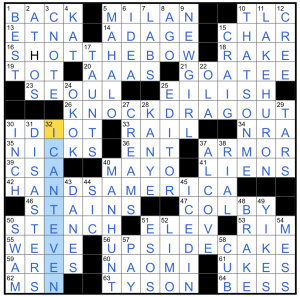 I like the vibe of this theme for sure! I looove when constructors sassily break crossword rules, especially on a Thursday. It got a “nice!!!” out of me, which is basically all I want from a puzzle. This didn’t quite stick the landing for me for three reasons:

Another thing that made this puzzle tough was the huge quantity of proper nouns, or things clued in a trivia-y way. For example, I know that MILAN is a city in Italy, but I didn’t know that it was the setting of “Farewell to Arms,” so that ended up being tough for me. I think there were ~16ish which is a LOT!! And many of them new to me, including (but not limited to) “The IDIOT,” KAT Chow, Cicely TYSON, BESS Myerson, and MAHALO.

Should we talk about the NRA? We can talk about it. Here’s my take: I don’t mind it in a puzzle, but I know other people really really really don’t like it. So I try not to put it in puzzles because I want my solvers to have a good time. I’d rather see a clue like [Target of “March for Our Lives” protests] than what we got here (1930’s Depression-fighting org.) which is like, trying to pretend we don’t all think “that gun organization” when we read NRA.

Editor: Amanda Rafkin
Theme: The first word of each theme answer is a type of french fry. 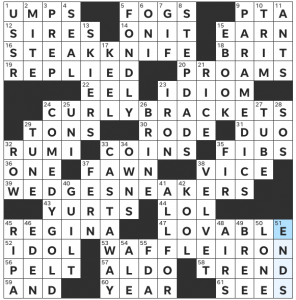 Cute theme! It’s a good thing I’m solving this at night after eating a bunch of takeout for dinner, since otherwise I’d be very hungry. I like all the theme answers a lot, although I will say that as a coder I always call them “curly braces” as opposed to CURLY BRACKETS. Also, WEDGE SNEAKERS have always confused me as a concept, and at first I thought the WAFFLE IRON clue was referring to these 90’s classic Moon Shoes, and I was very confused: 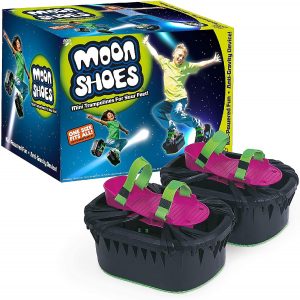 I had trouble in a couple spots of the puzzle today. I put in “kindly” instead of FONDLY for 5d[With affection], and I didn’t know ONI and I wasn’t sure if the file format was GIF or “pdf”. I also didn’t know 49d [“Lord of the Rings” village that sounds like a cheese] – is BREE a common LOTR thing to know? I know the major characters (and orc and ent of course) and then I’m out. I was surprised at this spelling because I would have guessed it would have been clued as a person’s name… but I guess this is just swapping out one proper noun for another. Oh, and I’ve never seen “Archer” so 11d [“That’s how we get ___!” (running joke on “Archer”)] for ANTS means nothing to me.

Fave fill: COMEDY GOLD, by a mile. I also love any REGINA George shout out.

Fave clues: [Fathers’ new partners, perhaps] for STEPDADS, 33a [Collecting 100 of these gives Mario an extra life] for COINS. 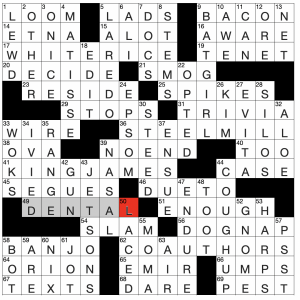 Nice idea! Fun to suss out. I sorta wished I only had the authors first names as the clues… feels like the themers are doubly clued in a sense (with the authors being upstaged by the actual definitions). But that may be something I can easier say with hindsight.

John Stuart MILL seems like the odd one out in this group. Like, if these writers were at a party, I feel like John Stuart would be the lonely guy in the corner while the others were yukking it up.

Nice clue for UMPS [Four of diamonds, for short?] There are four UMPS out on that baseball diamond!

Very smooth solver for me, coming in at 2:54 (I don’t frequently time myself, but anything below 3:00 is rare).

Thanks for this one, Susan!

Theme: Each theme answer includes grey squares that together spell out a type of tooth, making them literally “impacted teeth” within the words. 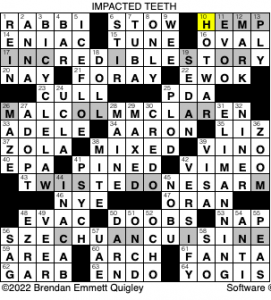 I thought that this was a relatively simple while still really clever theme. There was less wordplay in the clues themselves than one usually sees in BEQ themed grids, and it took only filling in INCREDIBLE STORY for me to figure out the theme, which certainly added in my solve as I worked through MALCOLM MCLAREN and TWISTED ONE’S ARM. Filling in CANINE also made SZECHUAN cuisine apparent, especially once I got 48d [“Hebrew prophet”] EZRA. Also, between the four themers, there were 58 squares of theme in this puzzle, and it didn’t seem to affect the rest of the fill too much.

I didn’t love the choice to clue OCHO as 52d [“Beto’s eight”] as I think that clues like that have long been stereotyping Spanish language speakers. However, I did really enjoy the inclusion of 14a [“Computer whose first code was written by six women mathematicians”] ENIAC and kicking off the grid with 1a [“Bat mitzvah officiant”] RABBI rather than “bar mitzvah.”

Solid puzzle with a simple but fun theme. That’s all from me for today! 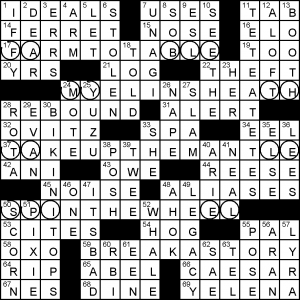 I didn’t see Emma Lawson’s theme until after solving. It possibly didn’t help that I desperately wanted the first theme entry to be FARMTOFORK, and when that was too short, FARMTOPLATE, although FA/ATE seemed to go nowhere. After that I forgot about looking at the theme. Once solved, it’s easy to see the classic trope of circles spelling out words, today as bookends. The revealer, BREAKASTORY, means all four are synonyms: FABLE, MYTH, TALE and SPIEL. The last stretches things a little, I feel, but is defensible.

[Former Disney president Michael], OVITZ and [Citrus hybrid used in Japanese cuisine], YUZU. My last square, after dimly recalling that surname, although runner Steve Ovett was clouding my recall. Also [Florence’s role in “Black Widow” and “Hawkeye”], YELENA crossing the [Harp constellation], LYRA. I had to change the A to an E when I realised YELENE wasn’t a typical name. Another entry that broke my stride was [Private discussions], TETEATETES since I hyper-corrected to TETESATETE.