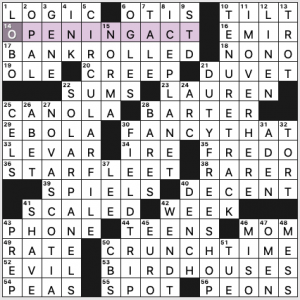 What, what?? I solved this in a decidedly Tuesdayish amount of time. I know Robyn is great at writing easy clues as well as tricky ones, but a themeless NYT doesn’t typically skew this easy. 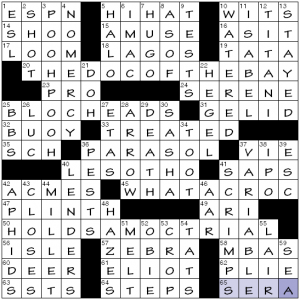 Nary a K to be found in this grid, but most notably in the theme answers, where it’s been dropped from familiar phrases. Since in each case it would have been preceded by a C, they still sound correct. Additionally, the K-less remainders are words in their own right.

Those are fun, no?

The revealer is RIGHT ON CUE (59a, [Timely, or a phonetic hint to how 16-, 26- and 47-Across turn]). The other theme answers are familiar phrases that feature the letter Q. Those phrases turn right (or down, depending on how you look at it) at said Q. Elegantly, the remaining letters—including and after the Q—spell out actual words which are clued normally. 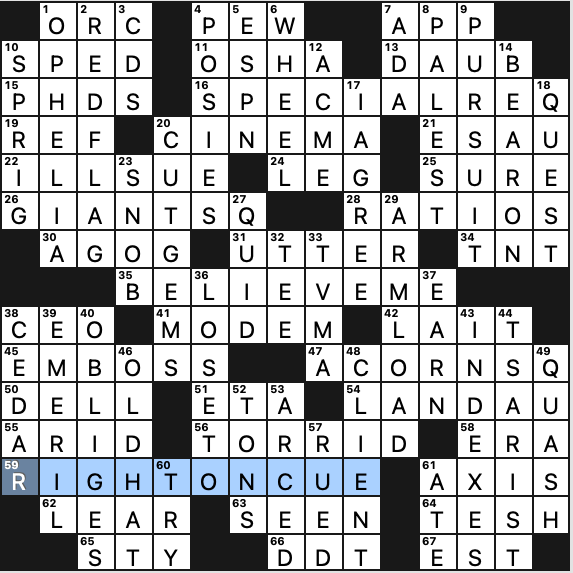 The turning aspect of the theme was apparent from the first theme answer, but why we were using the Q as the “turning point” wasn’t clear until I hit the revealer. I enjoyed that little aha moment.

My only nit would be the title which is too generic and would apply to any puzzle with a turning theme.

Turning themes take up a fair amount of real estate and put extra constraints on the grid. Those limitations are somewhat alleviated here by the fact that there are only three  main theme entries. That allows the puzzle to breathe and have room for fun long fill like “BELIEVE ME!,” “I’LL SUE!,” “I AGREE,” OPHELIA, CUT GEMS, OLD HAT, and RED FLAG.

Clue of note: 39d. [Lagasse who contributed recipes to NASA]. EMERIL. Neat factoid. By all accounts, astronauts on the ISS seemed to like their meals kicked up a notch.

Theme: Each theme answer is bracketed by letters spelling out BIG, literally “breaking” the word. 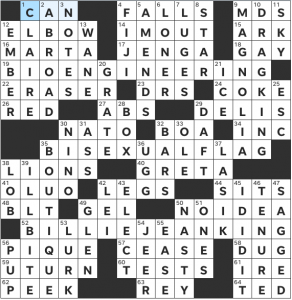 I saw the grid for this puzzle on Twitter this morning before I solved it, and I was immediately excited by BISEXUAL FLAG, the clue for which was highlighted. The title was pretty self-explanatory, and it was super helpful as I was sorting through the organized mess that is my brain to find the word BIOENGINEERING. BILLIE JEAN KING was also such a fun third themer here.

Theme fill aside, I thought that this puzzle was so fun and so well-composed. I loved the very fun LGBTQ+-oriented answers that included both 18a [“Like many characters in queer fan fiction”] GAY and 10d [“Performer who might sport a fake mustache”] DRAG KING. Plus, I also loved that DRAG KING was right next to 9d [“Mississippi’s state flower”] MAGNOLIA for two really solid eight-letter answers.

Some Friday faves for me:

I had so much fun with this Friday puzzle. It felt very purposeful and smooth in its theme and fill, and I would do it again if I could. 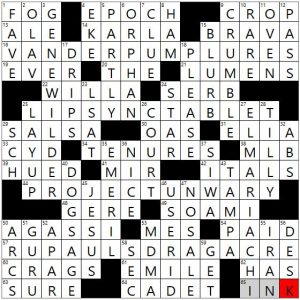 We’ve got a reality tv theme from Trip Payne today. I’ve been enjoying the heck out of Trip’s cryptics over at LEO, and this is the first “American style” I can recall solving of his. As I’ve come to expect, some fun humor, as the last words of reality show titles are anagrammed to create fun new shows.

I didn’t have much trouble completing the grid despite not really being a TV person; of this batch, I’ve seen the most of Project Runway, and least (none) of Vanderpump Rules.

Totally personal preference, but I like when we see 15-13-13-15 theme arrangements for the center area that come of out the L-shaped arrangements of black blocks. There’s some cool connectivity into that center range despite it being framed by those shapes, with GENE WILDER [3d Frequent collaborator of Richard Pryor], DOGS AGE, and EL MARIACHI [27d 1992 Robert Rodirguez film whose title figure is a travelling guitarist] particular highlights for me.

A great themed puzzle from Karen Lurie, that SPILLs THE T from the start of each themed answer. 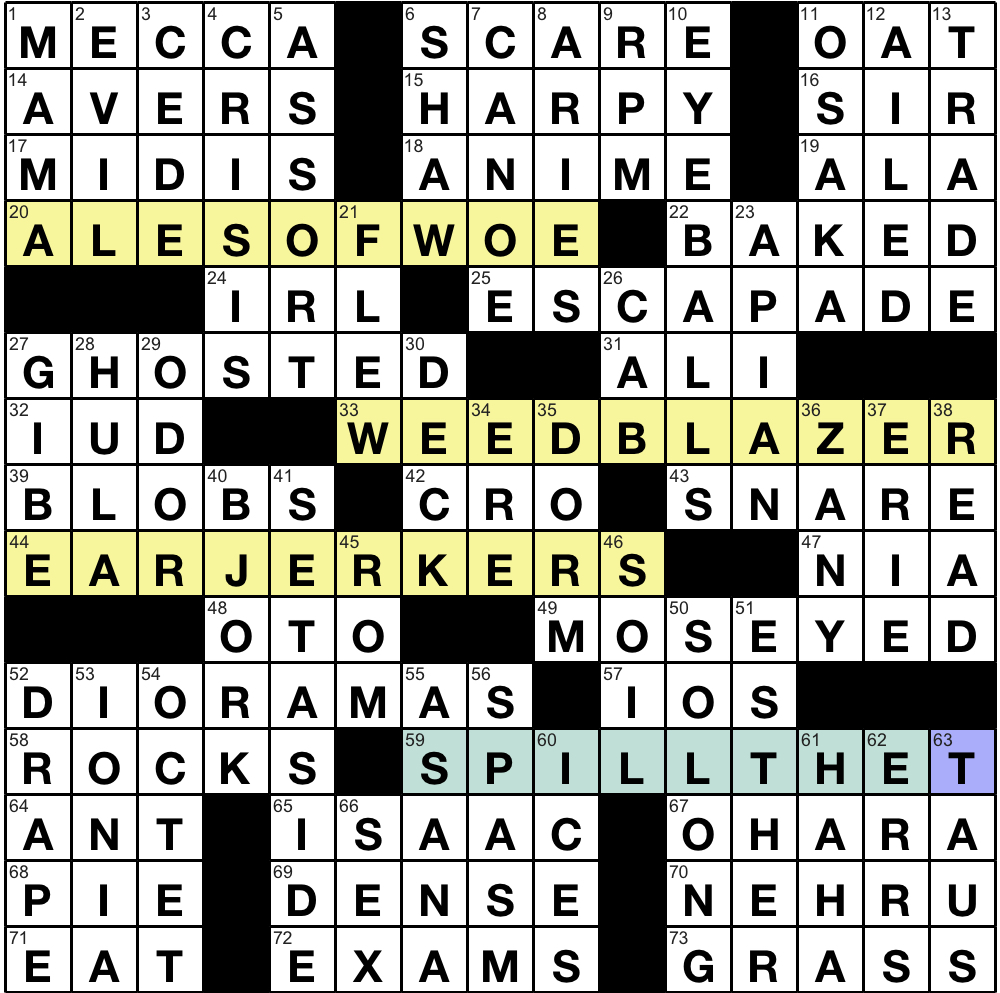 20-Across [Pub orders you’ll drink down?] ALES OF WOE

33-Across [One preferring joints to edibles?] WEED BLAZER

This puzzle gave me a few good chuckles and the SPILL THE T revealer brought something fresh to the ‘drop-a-letter’ genre. Of the themed entries, WEED BLAZER came easiest to me, but I didn’t get the theme until the ALES OF WOE fell – and the clues for each of these were great.