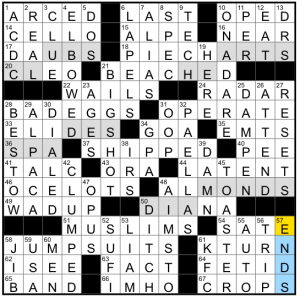 Theme: Today’s puzzle involves JUMPSUITS – that is, each of the four suits in a deck of cards (hearts, clubs, spades, diamonds) is embedded into this puzzle, with the second half of the suit a row higher than the first. Thus, the suit is “jumping” up to the next row.

I really liked this theme! I’m a serious card player so anything card-related will make me happy, and the wordplay is solidly amusing. While I was solving, I noticed that the shaded letters contained the suits, but I didn’t guess the revealer until I got to it. Thus, I was able to use the theme to put in some answers, but I still got an aha moment at the end.

The only thing I didn’t love about the theme was that most of the “suit” entries were a little boring (with the exception being PIE CHARTS). I think this is because the amount of thematic material forced the constructors to use shorter words, which are oftentimes difficult to make stand out. Almost all of the “suit” entries have the suit in the beginning or the end of the word, with the exception of the HE in BEACHED. I wonder if allowing the suits to be anywhere in their respective words could have allowed more interesting options? Either way, if the fill had been a touch more exciting, I think this puzzle would have been elevated from “very good” to “truly amazing”.

Hope everyone had a relaxing weekend!

The revealer is FINISHING SCHOOL (62a, [Where a young woman once learned social skills, and what each starred answer has]). The theme answers are familiar two-word phrases which end in (or “finish” with) a word that is also the name of an American university. 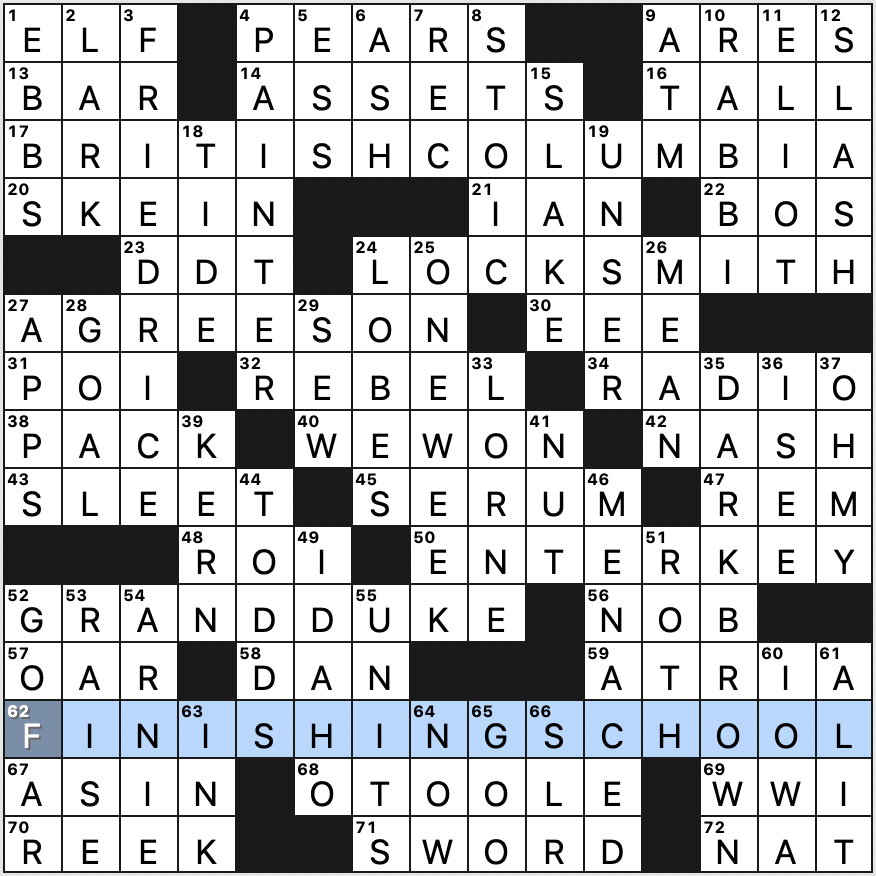 Nice straightforward theme for a Monday with just a smidge of wordplay. I caught sight of the school names after getting the top three theme answers but needed the revealer to tie it together. And that it did. My only nit is the title which I can’t seem to make work with the theme. “Remote Learning” implies something is separated or distanced, and that’s not a feature of this theme. 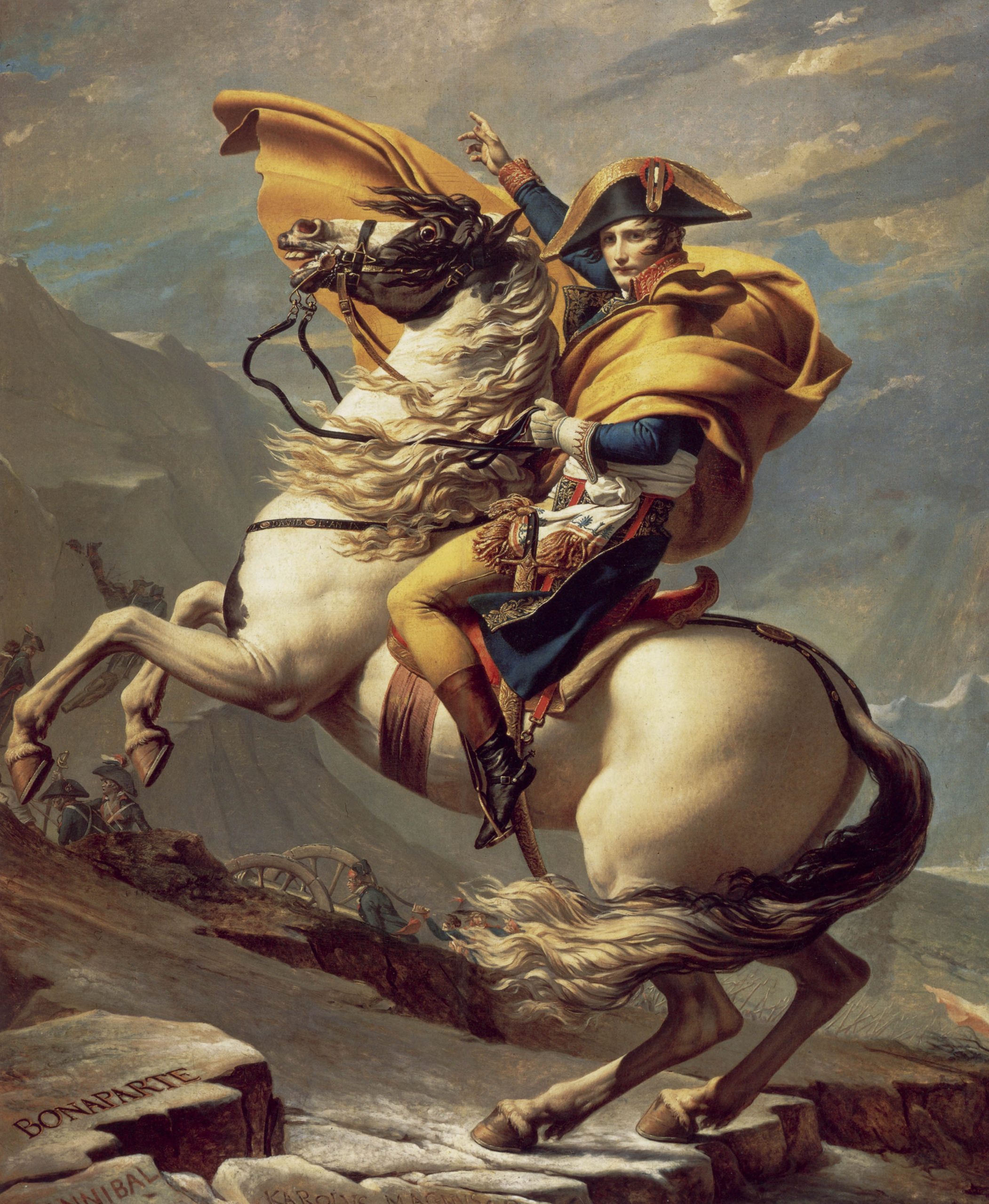 Not a lot of flash in the grid since we have a couple of theme answers in the Down direction, but the fill is smooth all around.

Clue of note: 4d. [David or Moses]. PAINTER. Not a Monday-level clue. Grandma Moses I sussed out, but the other…Jacque-Louis David, I gather? Not a name in the forefront of my mind, but I do recognize Napoleon Crossing the Alps.

Other than that tough clue, we have a smooth grid and quick solve with an accessible Monday theme. 3.5 stars. 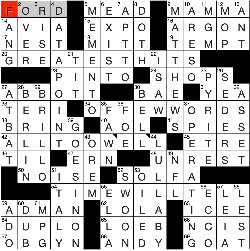 I’ve worked with John Lieb for a couple of years now as a test solver for the various Boswords tournaments, so it’s a pleasure to see his byline on a puzzle. This one, I think, might have been better suited to a Tuesday or even a Wednesday than a Monday, but that’s not on him!

The revealer, which I had to hunt for, is the final Across answer, 69A [Superlative acronym spelled out by the starts of the answers to the starred clues], GOAT. Which in this case does not mean an animal with beards and a horn, but rather the acronym that’s short for GREATEST OF ALL TIME. And when you look at the starred clues — 20-, 34-, 42-, and 54-Across — the first word in each of the theme answers is GREATEST, OF, ALL, and TIME respectively:

I think the not-so-typical theme trope, plus some tougher answers in the grid like SOLFA, DOTH (which could easily be HATH as clued), PYRITE, OREM, and ECCO mean this puzzle would make more sense on a later day of the week. But again, that’s no fault of the puzzle itself. 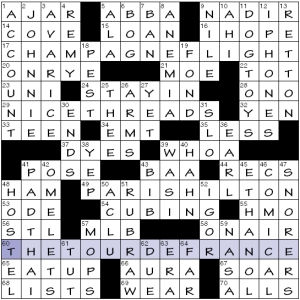 Theme feels kind of insubstantial to me. 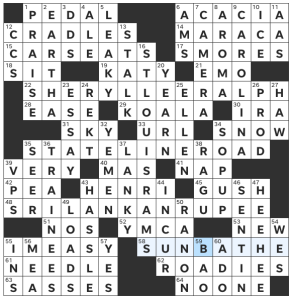 Good morning, squad! I feel like this puzzle has bonded me and Neville bc now we have both collaborated with Erik on a USA Today puzzle that features an “Abbott Elementary” actress as a theme answer. In this one, we’ve got SHERYL LEE RALPH, who (as the title suggests) has the initials SLR. The other theme answers are STATE LINE ROAD, SRI LANKAN RUPEE, and ST. LOUIS RAMS which were new-ish to me (e.g., I didn’t know they used rupees in Sri Lanka) but easy enough. (I did try “lane” and “land” before LINE, the latter makes much more sense.) I am wowed at how they crossed the central theme answers while maintaining symmetry and clean fill.

Other fun stuff in here were some repeat clues (“Name that sounds like two letters” for KATY and ELLEN, and “Word in two / four U.S. state names” for CAROLINA and NEW) and mid-length fill like CAMERA and SUNBATHE. That last one was a nice reminder that I will be on vacation in three short days. 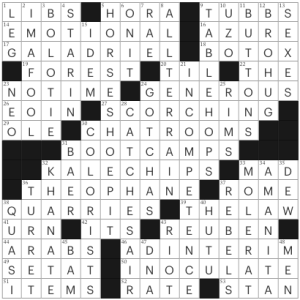 What have we here? A 66-worder from Natan.

New to me: 36a. [Figure in Greek mythology whose name roughly means “manifestation of God” and who gave birth to the ram with the golden fleece], THEOPHANE. The THEO- part was inferrable but no, I don’t know the Greek root pertaining to “manifestation.”