This Sunday’s NYT puzzle has things repeating on us, but thankfully we don’t need the heartburn pills. Let’s dive in! 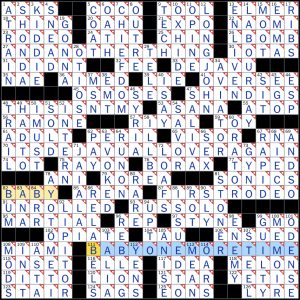 33A: DEJA VU [Eerily familiar feeling]
70A: ITS DEJA VU ALL OVER AGAIN [Classic Yogi Berra quote [ref. 33-Across]]

Normally, dupes (words appearing more than once in the same grid) are a big no-no, but this puzzle uses dupes to fantastic effect to give a series of echoes: each theme entry is an n + 1 of an earlier entry in the grid. We have THING… AND ANOTHER THING, we have DEJA VU… and ITS DEJA VU ALL OVER AGAIN, etc. So fun! I especially appreciated that each longer theme entry came after the initial word, allowing the theme to make chronological sense (assuming you’re solving from 1A on down). What a simple, but super neat and effective theme idea. I wonder if there are other theme entries he might have considered – let us know in the chat if you can think of any.

Other random thoughts:
– 78A: AN I [The last thing a Mississippi cheerleader wants?] – Ok, now this cracked me up. Nice clue for what could be rough fill.
– 91A: UNROLLED [Consolidated for easier reading, as a Twitter thread] – I really enjoy seeing modern clues like this in the puzzle!
– 103D: TALIA [___ al Ghul (on-and-off lover of Batman)] – In the Batman universe, this character is so much more than a sexual conquest, so it’s unfortunate to see her clued not based on her villain status or other contributions to the story line, but solely based on her romantic connection with Batman.

– It felt strange having OAHU (clued via the Dole Plantation, who’re profiting off of Hawai’ian native lands and resources) crossing CHIEFDOM (clued with respect to an “ancient” Hawai’ian political unit… which is only largely bygone because they were colonized). The first clue felt agnostic to Dole’s impact while the second clue felt like it was trying to honor Hawai’i and its people. These types of clue pairs give me a small bit of whiplash.

– On the other hand, I value puzzles that make an inclusive/progressive statement and when an outlet like the NYT honors its constructor’s clues in that realm, so I was personally happy to see these clues make it into the final puzzle:
– 16D: EMMA [Goldman who crusaded for birth control]
– 62D: PAY [It’s illegal for employers to prohibit workers from discussing this]
– 78D: AYO TOMETI [Black Lives Matter co-founder]

That’s all from me for now. I hope you’re all doing well and staying safe!

Theme: Each theme answer contains CON between two words as an answer to a Down clue. 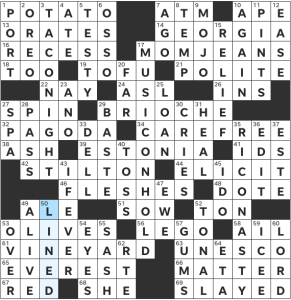 I was fairly certain that I knew what the theme was right away when I saw “Condescending” as its title, and, sure enough, my suspicions were quickly proved correct when I filled in TACO NIGHT. I didn’t know about RICO NASTY, so I primarily got that on the crosses. MUSIC ON HOLD felt a little awkward as a phrase to me, but I appreciated that it continued the sort of waterfall effect these answers had, each beginning further down in the puzzle.

This grid is asymmetric, and it had some really nice answers throughout that flowed very well. I felt like my vocabulary was tested in drawing out ELICIT, FLESHES, and 66a [“Be important”] MATTER. I also loved seeing MOM JEANS in the upper right and SLAYED down in the lower right. If you were hungry, you got plenty of food options; it might as well have been an (odd) menu: POTATO, OREO, 6d [“Venison ___ buco”] OSSO, TOFU, BRIOCHE, STILTON, and OLIVES.

Overall, it was a really quick and easy solve, but it was also one that stretched my mind a bit in the creativity of its definitional answers.

Evan’s instructions tell us that The answer to this week’s metapuzzle is the winner of the World Series of Poker Main Event from the past 20 years who completes this puzzle’s theme. (You can visit cardplayer.com/poker-tournaments/wsop to find a list of winners.)

I don’t know about you, but I’m not up on my poker world series winners, so I’m likely going to be using that link.

THEME: Something with poker, I guess!

Of course, with a meta, you can never be certain, but some longer answers stick out more than others. So the ones I’m going to give my initial attention to are:

Hmmm. Now what? Step one in trying to crack any meta for me is to look at the first letters of either or both words in the theme entries. That doesn’t yield anything here, so I move on to step two: anything else.

Do the themers have anything in common? Not really. I mean they’re all two word phrases. Let’s peep that title again. Often that gives a hint. Shuffling the Deck. Well, “shuffling” in cryptic crossword speak often refers to anagramming letters. Are there anagrams here? Let’s see, focusing on the bridge between the two words because any decent constructor is going to make sure a hidden word theme utilizes both words of a two-word phrase. Well in ROBOT WARS, nothing catches my eye, but in THE TERMINAL I see HETER, which anagrams to THREE. In WATER FOUNTAIN, RFOU anagrams to FOUR. That can’t be a coincidence! Maybe I missed something in ROBOT WARS? Ah, yes! TWO is barely hiding at all. Here’s the complete list.

Notably missing from that list is NINE. Where is it? Did I miss one? No. This must be the key to the answer.

And it is. It’s so simple, but I spent the most time on this last part- looking at other grid entries for the letters N-I-N-E, counting the 2nd, 3rd, 4th, letters of each of the themers, etc. Suspiciously eyeing IVIES in the grid since I vaguely recall a player named Phil Ivey when I went through my brief poker watching phase.

Maybe I need to click on that link just to get some of the winners’ names in my head. And hey. Since I’m going back to the notepad for the link anyway, maybe I should re-read the hint. Bingo. The hint tells us we are looking for a player who completes the theme, which means we’re looking for someone who has the letters N-I-N-E hidden in the first and last name.

And that would be…. this guy!

HOSSEIN ENSAN is our meta answer today! I wonder if he is aware of that.

I really liked this meta. Definitely a bit trickier than more recent ones, but a nice satisfying AHA moment. As per usual, it’s bound to attract low-raters who simply do not like metas, but I’m glad that Evan continues to ignore that, and I do hope more and more solvers are jumping on the meta train. It’s a fun train to be on.

Very smooth solve in the fill for me, finishing in just over ten minutes. I really need to start watching It’s Always Sunny in Philadelphia. The character PEPE (Not-LePew) Silvia sounds intriguing.  And I liked the clue for RADIO [Hit home?]. Maybe a bit of a stretch, but the “home” of the top 40 “hits” would certainly be on the FM airwaves!

Thanks for this one, Evan! 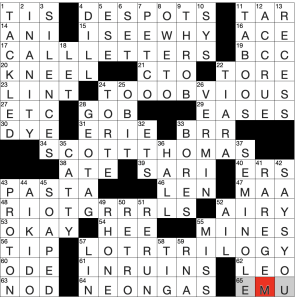 Solved this mostly as a themeless. It has that vibe anyway with a lot of white space in those corners. The entries, however, are not as exciting as a themeless because there is indeed a theme that needs to be worked around. And it’s a tidy theme with a pleasant revealer. I’ve seen similar ideas with letters that repeat a few times. The entries here didn’t land with me for the most part. CALL LETTERS was fine, but TOO OBVIOUS doesn’t strike me as an in-language phrase. SCOTT THOMAS feels like a partial in a sense and RIOT GRRRLS is totally cheating. First of all, the RRRs do not bridge both parts of the answer and secondly, I never see it in the plural.

So cool idea, but for me it lacks entries that would make it shine.

A few weeks (months?) ago editor David Steinberg announced he’d be adding themeless Sundays to the mix and here’s the first one. If it’s an indicator of future Sunday themelesses, I’M HERE for it.

Erik Agard (himself editor at the USA Today) brings us a jam-packed grid filled with fun entries, impressive grid-spanners, and fresh and diverse cluing. Let’s get to it. 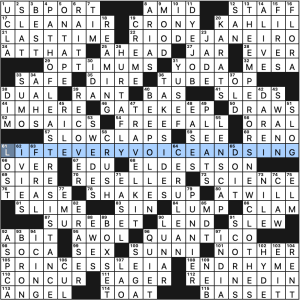 I have to start with the central grid-spanning hymn of LIFT EVERY VOICE AND SING [Anthem performed at Wattstax in 1972 and Coachella in 2018]. I confess to not knowing the title, and it took me a while to parse it, but it makes for such a lovely and inspiring central entry. See below for Beyoncé’s performance of the hymn at Coachella.

The other grid-spanners (crossing that one, no less) are PATH OF LEAST RESISTANCE and THE EMPEROR’S NEW CLOTHES. Ugh. That’s so good. I expect these three entries made up the skeleton of the grid and he filled it in from there. Oh, and those clues: [Coast line?] and [Story whose title character is barely seen?]! Fun stuff!

Moving on we get RIO DE JANEIRO (did you spell it correctly on the first try?) and PRINCESS LEIA and a whole slew of 7s, 8s, and 9s everywhere in the grid: USB PORT, CLEAN AIR, LAST TIME, TUBE TOP, GATEKEEP, MOSAICS, FREEFALL, SLOW CLAPS, ELDEST SON, SHAKES UP, SURE BET, QUANTICO, REINED IN, LENS CAP, TAKES SIDES, BEE POLLEN, TRAVEL KIT, CERULEAN, and Angela BASSETT. I also liked BOX SET, DYE JOB, AT THAT, and NOTHER, as in, “That’s a whole NOTHER story.”

I wasn’t familiar with KAHLIL [Poet and painter Gibran], and it’s been a long time since I encountered the phrase END RHYME [Roses are red / violets are blue / poetic device / found in this clue], but the crossings were quite fair. And that’s a fun clue on the latter, eh? Also never heard of SOCA [Music of Trinidad and Tobago]. It’s “an offshoot of kaiso/calypso, with influences from East Indian rhythms and hooks.”

I said it was jam-packed, didn’t I? A truly impressive grid. 4.5 stars. 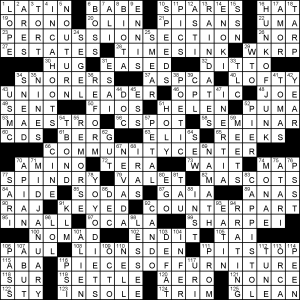 Today’s puzzle is very meta. It features several two part answers that are clued simply as [U]; the first part has a U and the second could be reimagined to describe where the U is… So: PERCUSSIONSECTION, UNIONLEADER (first letter], COMMUNITYCENTER (letter 5 of 9), COUNTERPART, PIECESOFFURNITURE, HUNKOFJUNK and MIDJANUARY (letter four of 7)