Note: No WSJ puzzle due to the federal holiday of Juneteenth.

Theme: The last word of each theme answer sounds like a group of people from a certain country 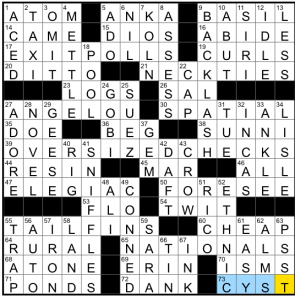 My brother’s name is Nat, so when I first saw the revealer I thought “Is this a Nat themed puzzle???”, and was slightly disappointed when it was not. But after I got over it, I realized there’s a lot to like in this puzzle! It’s cool that all of the words are pronounced the same way as the nationalities, but none of them are spelled the same. Are there other countries it would have been possible to include? Feel free to brainstorm in the comments. Also, I love the entry OVERSIZED CHECKS, because it’s legitimately one of my goals in life to win one of those for literally anything.

The fill overall is pretty Monday-friendly, in my opinion. I ran into a bit of trouble with ELEGIAC (47a [Mournful, as poetry]), and originally had “elegian” even though that’s not a word. I was also not sure about LISLE (34d [Cotton fabric named for a French city]) and was wondering at first if I was meant to have “Lille”. Oh, and it’s a good thing that I did the whole SE on the downs and totally missed ISMS, or else I would have been annoyed about that. But otherwise things are super smooth, which is impressive for a puzzle with 5 theme answers!

Favorite clues: 29d [Plural that makes one wonder why there aren’t any meese] for GEESE, 26a [Kid-lit classic “Blueberries for ___”] for SAL (I loooved this book as a kid), 72a [Like moldy basements and some memes] for DANK.

This is a theme of a sort that I think has fallen out of favor — it reminds me of Maura Jacobson and Merl Reagle, in that there’s not much tying the theme entries together other than a pun in the clues. I’m hoping that this puzzle is a sign that Patti is open to reviving this theme type, because when done well, as it is here, it gets you starting your Monday with a smile on your face. 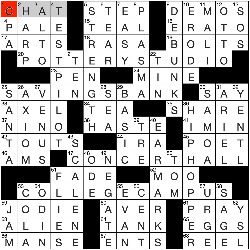 Said theme relies on people’s names that are related to a particular pursuit, and therefore some places that it would be very on-the-nose for such folks to go:

When I say this puzzle is done well, I mean: The fact that the theme is in the clues and therefore won’t necessarily help beginning solvers get the theme entries they’re missing once they have one or two, is not a barrier to solving because the grid is so clean. There are almost no proper nouns crossing each other (I caught only ERATO and OTTO crossing MALI in the NE corner, and JODIE/ODIN in the SW), and lots of nice easy clues to help beginners along. It’s really freakin’ hard to make a Monday grid this clean; my compliments to the chef. 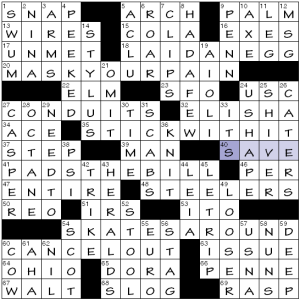 During and after the solve, I wasn’t clear on what the theme was, but then I consulted the title. Also, I might have been considering 18a [Totally flopped] LAID AN EGG and 60a [Neutralize] CANCEL OUT as part of the theme.

As soon as I saw the title—and with a jolt of memory about 40a [Goalie’s success] SAVE, the theme was obvious. Roughly top-to-bottom, we have mask, stick, pads, and skates—i.e., a goalie’s gear. 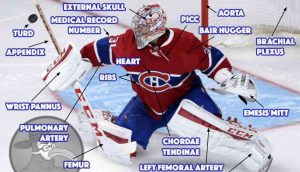 I found this helpful infographic on the internet

I believe the NHL playoffs are still underway this year. 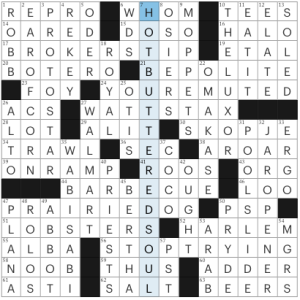 Let’s see what this 70-worder holds. Some of my fave fill has a Juneteenth vibe to it: WATTSTAX crossing HOT BUTTERED SOUL, with a BARBECUE and its EAR OF CORN, maybe a POOL SLIDE, too. Other likes: YOU’RE MUTED,  SKOPJE (friend of mine worked there for a few years with the Peace Corps organization), PRAIRIE DOG, WABI-SABI, OMAKASE (none for me, thanks, I need to choose my own foods!), and THE LUXOR.

What also jumped out at me was some crosswordese holding the grid together: ODER, OARED, OSIERS, AROAR, PLAN A (does anyone really talk about plan A, or is it just the thing you’re trying, and if it doesn’t pan out, there’s always plan B?).