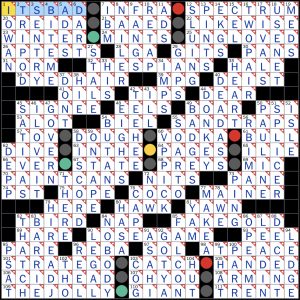 For me, this theme was okay, but I felt like it was missing a reason why. I see how the black square layout nicely allows for the stoplight shapes, but it’s not clear to me why we’re to interpret the traffic lights as colors going across but as directions going down. Also, it’s a bit of a bummer that none of the colors or directions are reimagined, and it’s unclear why these specific theme entries were used over any others, aside from that they fit. I will admit that MAKE A STOP and HAS A GO is an uninspiring pair of entries to finish the theme on. And I don’t know that I understand the full clue for I’LL YIELD NOW, so maybe someone can help me with that in the comments.

Overall, I guess I would have wanted some extra way to tighten this theme or some reason for interpreting the traffic lights as we’re intended to. But, then again, this puzzle got published by the NYT and I’ve only had a string of rejections from them lately, so YMMV indeed! (This puzzle is certainly theme-dense, at least, so it can certainly have that feather in its cap.)

Other random thoughts:
– 1A: ITS BAD [“In a word … awful!”] – This isn’t a comment on this puzzle, but rather on a lesson I learned the hard way early on as a constructor: Be very careful about including entries like this in your puzzle (especially at a key place like 1A!) if you don’t want to give naysayers an easy way to self-own the puzzle. To me, it feels extra painful for someone to use my puzzle’s own entries against me!
– 40D: DEAD ASS [Utterly, in slang] – This is one of the few places in the puzzle where I felt any degree of personality or modernity in the grid. I wanted more of this.
– 56D: RBI MAN [Baseball slugger, informally] – Is this a thing?

That’s all from me for now. Time for me to go, so I’ll yield to the commenters for more thoughtful insights. Stop by the comments section and let us know whether this puzzle gave you the green light or not. :) 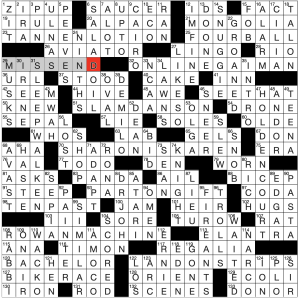 A classic theme type if ever there was one, very reminiscent of Evan’s predecessor, Merl Reagle. Never feels like this sort of theme gets old If (and it’s a big if…) the entries land. And these all do.

I mean, SHARON IS KAREN (both the clue and the entry) for the win. It knows it’s good too. It’s dead center. That one got a lol scoff from me. Pretty much everything else tied for second place.

No major stumbles other than in the MISSEND / SALAD OIL / NINTHS section. Didn’t know if the plural of ULNA ended in an S or an E, so that didn’t help. But those three entries didn’t jibe completely with me as clued during the solve (in retrospect, they’re fine).

I’m not sure how KNIGHT comes from [Board member?] either. Oh wait… is it a chess reference? That’s my best guess. Clue for PAINTER [One who may have a brush with fame?] felt a little out there too, but in a more clear sense.

Overall, a pleasant return-to-the-roots sort of puzzle today. Not too much else to say about it other than I enjoyed this one!

THEME: Phrases with a synonym for “father” in them 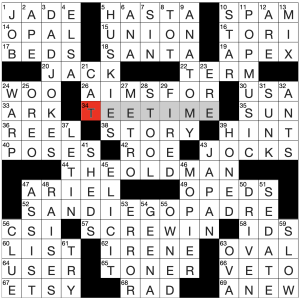 Nice smooth puzzle with an almost themeless vibe. Lots of interesting longer answers and a nifty L/R symmetry to accommodate the theme.

Theme is fine. Very clear as to what it’s trying to be. None of those “fathers” are hiding anywhere. A little bit of inconsistency with a phrases like POP MUSIC in the mix with the likes of DAD JOKES as, in context, the word POP has nothing to do with fatherhood while the word DAD certainly does.

Not familiar with the 2022 FX show THE OLD MAN. Oh wait. I just googled it. It’s very new, and I think I just read a NY Times article about it. I mean, Jeff Bridges and John Lithgow star, so already my interest is piqued. Ah yes- here is the article.

Also, is TEE TIME a little nod to the stereotypical DAD pastime of golfing? It seems to be winking at us from the center of the puzzle.

My favorite mistake was entering SCREWED for [Like most lightbulbs]. I thought that was rather crass. It is. The correct answer was SCREW IN.

Thanks for this one! And Happy Father’s Day!

Two Burnikels for the price of one! Making his debut today is Doug Burnikel, husband to veteran constructor Zhouqin.

They bring us a grid for the birds this Father’s Day. Each theme answer is a familiar(ish) phrase whose outside letters (beginning and end) spell out a type of bird. Circles are provided to make finding said birds much simpler. 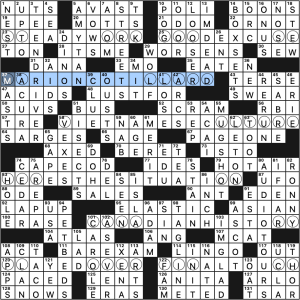 Very nice, eh? I especially like how each bird is more than five letters long, upping the challenge for the constructors. No jays or owls here, even though JUDGEMENT DAY and OWNER’S MANUAL would make for fine answers.

And eight long theme answers is a hefty amount for a 21x grid, but with Zhouqin’s experienced touch, the fill is smooth all over. Highlights include AUDIO TOURS, TEEN DRIVER, BAR EXAM, MUG SHOT, CAPE COD, PAGE ONE, BOX SETS, PET BEDS, TAGLINE, and HOT AIR as well as “I’M DEAD,” and “I’M GLAD” (not necessarily in that order).

Theme: Each theme answer is a food that has a season in its name. 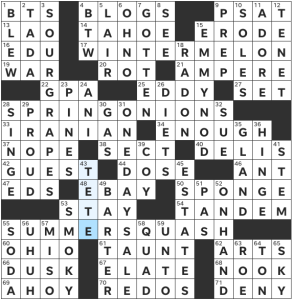 As always, this puzzle has made me hungry. I thought that this was a fun theme. It was pretty clear from the title what it was going to be, but I still enjoyed the journey as it was, and it took me a few minutes to fill in each. I started with WATERMELON in 17a but quickly realized that it was, in fact, WINTER MELON. SPRING ONIONS fell into place quickly after that, as did SUMMER SQUASH, that Q of 58d [“Campus courtyard”] being pretty helpful.

This grid was asymmetric, and I think that the NE and SW corners were both a bit tight, with only one Down answer coming out of each (3d [“‘I didn’t want it anyway!’ attitude”] SOUR GRAPES and 52d [“Available for use”] ON HAND). I’m guessing that had more to do with the theme answers cutting across both of those. 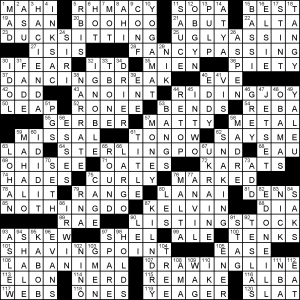 https://crosswordfiend.com/blog/wp-admin/tools.php
I did notice the title of Ed Sessa’s puzzle featured an “-ing” form verb and each answer had an “-ing” form word of various functions, but it took an embarrassing while to cotton on that it was just common phrases swapped, each having one “-ing” form word. It’s an odd quirk of the puzzle that the first two have new forms ending with the “-ing” word, but then the final seven go the opposite way.

Always intimidating to find clues and answers to single out in a big puzzle, but here goes: