This month, we are asked, What seven-letter word is hinted at by this puzzle? There were seven starred theme entries:

I thought that the seven theme entries would each provide a letter (a classic meta mechanism), but that didn’t turn out the be the case this time. I made a list of famous sevens in my notes (including ROYGBIV), but I couldn’t find a signal. I focused on the wordiness (and specificity) of the clues for BLADERUNNER and FINDINGNEMO. I kept looking for substrings in the themers and somehow missed VIOLENTLY/VIOLET. I poked at this puzzle for a few days, kept glancing at my also unsolved MGWCC, and asked my friend Gideon for a nudge. 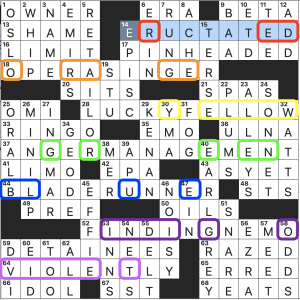 He confirmed that ROYGBIV was the rabbit hole. I spotted VIOLET hiding inside of VIOLENTLY, and I had the solution: each themer contained a color of the rainbow, in ROYGIV order:

ROYGBIV leads to RAINBOW, our contest solution. I’ll end with Debbie Harry singing Rainbow Connection with Kermit on The Muppet Show. She also performed One Way or Another and Call Me with the Muppets, be sure to check those out.