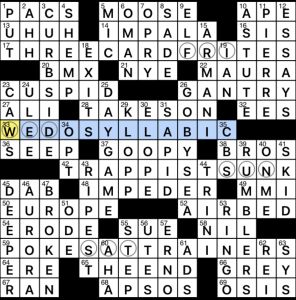 Hi everyone! In this week’s clever theme, Matt swaps abbreviations of days of the week found in other words and phrases.

This theme really hit the spot for me. Honestly, any grid with a Pokémon reference gets a thumbs up in my book, but I enjoyed all the theme entries here. 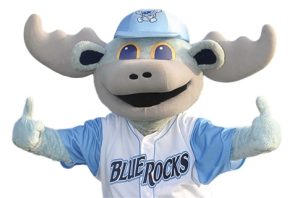 Theme answers are familiar phrases whose final words can also be components of a living creature, from small to large. 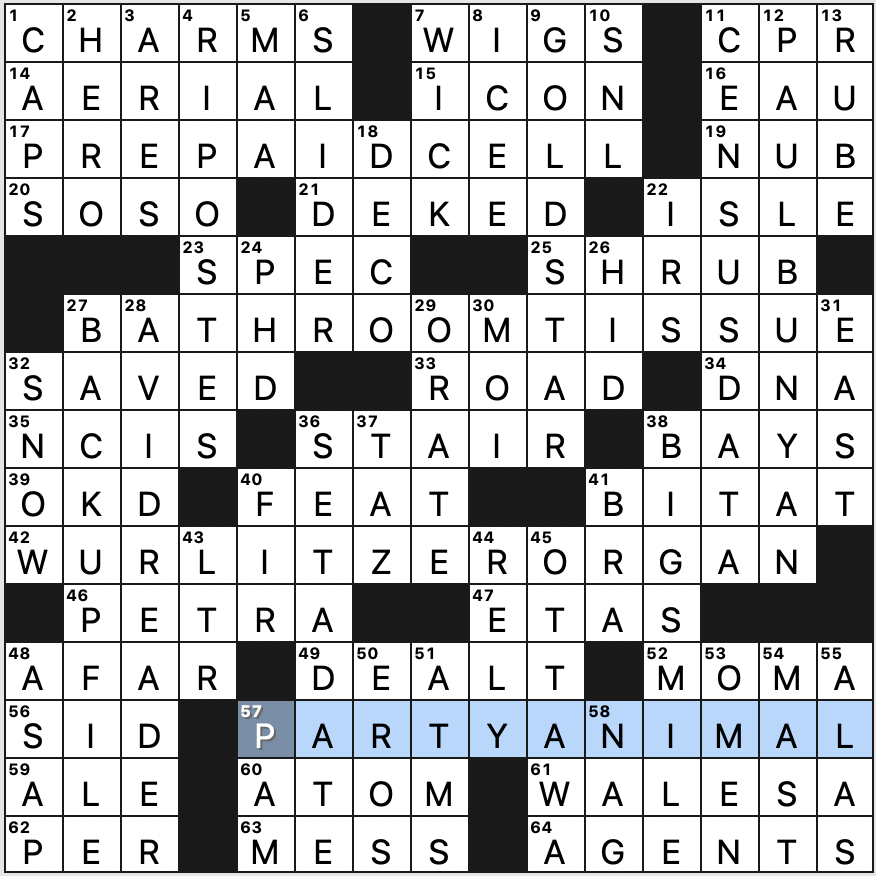 When the theme didn’t come to me after the third entry, a quick pick at the title was in order. A few seconds later came the aha moment. Nicely chosen theme answers with fun clues and a perfectly apt title.

It’s always nice when a constructor can work in some juicy long stacks of fill. Today we’re treated to CENSUS DATA and PAUL BUNYAN as well as BACKUP FILE and AVID READER. Plus BIG SMILE, RIPOSTES, GOLD STAR, and SET A DATE.  GOLD STAR for the long fill today!

Clue of note: 49a. [Passed out while playing]. DEALT. Ha. Clever clue. 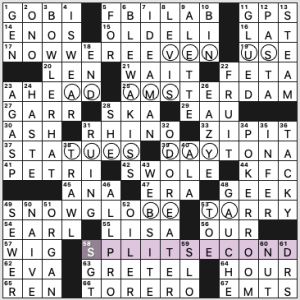 Theme revealer: 58a. [Instant … hinted at four times in this puzzle’s circled letters], SPLIT SECOND. The circled letters spell out words that are split across two successive entries, and each of the circled words is a thing that’s second: VENUS is the second planet from the sun, ADAMS was the second president, TUESDAY is the second day of the week (provided you start from Monday rather than Sunday, which renders this problematic for some solvers), and BETA is the second letter of the Greek alphabet. Before I got to the revealer, the proximity of ADAMS and TUESDAY made me think of Wednesday Addams.

With 67 theme squares here, it’s not surprising to find a few entries that I’d argue don’t belong in a puzzle pitched to beginners. (Maybe this should be a Wednesday puzzle with slightly tougher clues?) I’ve been great at solving crosswords for decades, and I’ve done many thousands of them, so it is surprising to find an entry in a Tuesday puzzle that I don’t think I’ve seen before: 9d. [Small building wing], ALETTE. What the …?? Who uses this word?! Also on the hard side: OLD ELI, if you didn’t go to Yale.

3.75 stars for the theme and BLEW A KISS, considerably less for the fill including ALETTE and OLD ELI (and crossing the two, no less!). 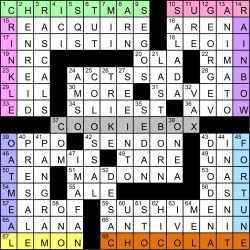 Hello there, everyone! I hope you’re all doing well as we enjoy the longest day of the year! Oh, and stay cool, people!

Today’s grid was a cookie cutter of sorts, with all of the entries making up the perimeter of the grid turning out to be words that are also types of cookies. Smack dab in the middle of the grid is the reveal, COOKIE BOX (37A: [Container for sweet treats, as suggested by the answers on the puzzle’s edges]).

THEME: “Pairs” of two-word phrases where both of the words begin with R. 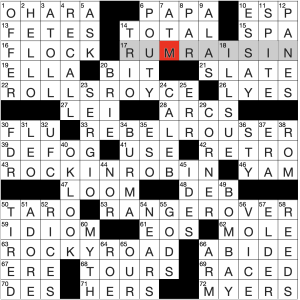 Thought I was going for a personal speed record until I got hung up in the DEFOG section where I confidently entered DE-ICE, making UFC, OK LOOK, and SERGIO difficult since none of those were gimmes for me.

Anyway, the theme is both very simple and slightly confusing. I don’t quite understand the “No. 1” and “No. 2” parts at the ends of the clues. I guess that’s just to point out that they make up a pair in the grid itself, but for me it read like ROCKIN‘ ROBIN was a number 1 hit of 1958 and REBEL ROUSER was a number 2 hit. Was ROLLS ROYCE the first luxury automobile? Do people keep track of that stuff? What’s the criteria? RUM RAISIN the first flavor of ice cream ever? Who knew!

Obviously, that’s absurd, but those were the thoughts running through my head. I don’t think solvers need help grokking that there are pairs. Simple clue repetition sans “No. 1” and “No. 2” would’ve felt a lot less cumbersome to me.

All in all, a fine breezy theme. It’s themes like these that give a turbo boost to speed solving since you know you are looking for R/R phrases. With 6 themers, the fill felt just fine to me, though the word count was upped to 80, which is slightly above PAR. 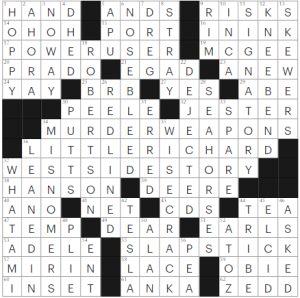 Lot of stuff in my bailiwheelhouse today, so I’m inclined to cast a benevolent eye over this themeless offering.

Theme: Each theme answer ends with a word for a party 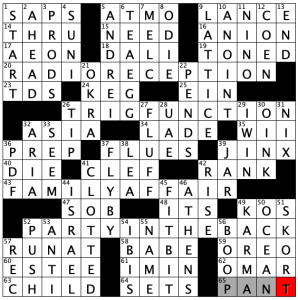 This is a really cute theme! The revealer and the mullet connection is great, even though none of the theme answers blew me away – FAMILY AFFAIR is probably the best one. But the power of the theme made this a very enjoyable solve.

As someone who has solved a lot of Stella’s difficult themelesses, I love switching it up and solving her early week puzzles. Today, most of the difficulty I had came from replacing short crossword-y words with others – for example, going from “eons” to “ages” to AEON for the clue 17a[Many millennia]. But overall the grid is very clean with some nice mid-length fill in FITBIT and TEAEGG. I didn’t know ANDREI Sakharov, but since he’s a Nobel Peace Prize winner, I was happy to learn his name (and the final letter I/W cross was very clear too). 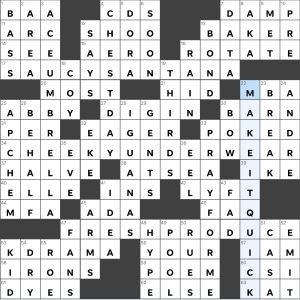 Theme: the first word (“front”) of each themer is a synonym for “flip”

SAUCYSANTANA is a rapper new to me but has some awesome jams–including the clued “Material Girl”. CHEEKYUNDERWEAR shows just a peak-a-boo of booty. FRESHPRODUCE always provides the best flavor. h/t to Sally and her blog, for explaining today’s theme and be sure to check out the collab’s constructors comments on it too. The word “flip” had me thinking of the various definitions but for me “flippant” would have cued me in better, though the variety with “flip” is very much in crossword-style of possibilities and misleadings, so I like it very much even though I needed Sally today for the theme.

Super fun and I hope to see more collabs from this duo!