THEME: SETTING SUN – Each theme answer, moving from east to west, has the letters “SUN” in a progressively lower position. 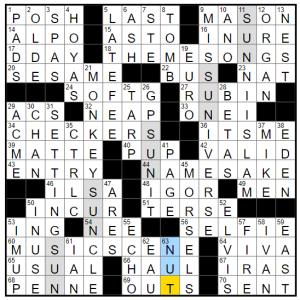 A pretty simple theme today for the NYT. My time might belie this puzzle’s difficulty, given that I’m solving on my friend’s computer and made approximately 1000 typos during my solve. When I first looked at the pattern of the shaded squares, I pictured them rising from the west to the east, as opposed to setting in the west. I guess this is because in English we read left to right and that’s how my brain parses information? I’m curious if other folks assumed we were getting a rising puzzle too.

Honestly, the puzzle was easy enough for me that I barely noticed the shaded squares during the solve. I did like the elegance of SETTING SUN being the final theme answer. When I saw EAST down there in the other corner I wondered if it was also part of the theme and there was another layer I was missing… but I don’t think there is. My favorite theme answer was MISS UNIVERSE, although clueing the pageant using three men kind of highlighted the lack of women in general in the puzzle for me (by my count, just ILSA, and clue references to Victoria Beckham and Wonder Woman).

The two longest non-theme answers of THEME SONGS and MUSIC SCENE are both fill highlights for me. I also like SELFIE, although I’ve definitely taken those from closer than arm’s length. I did not love ONE I, or the clue of [On the ___ (unfriendly)] for OUTS – to me, someone on the outs is someone being excluded in a larger group (or at least that’s how it’s used in Survivor). 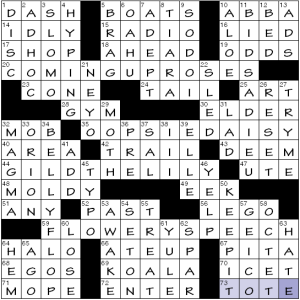 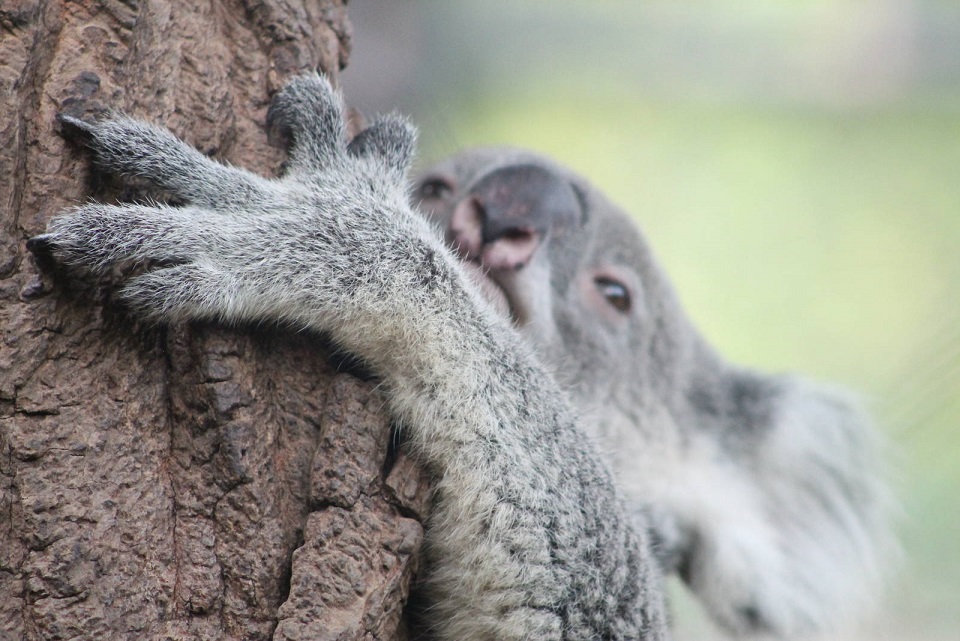 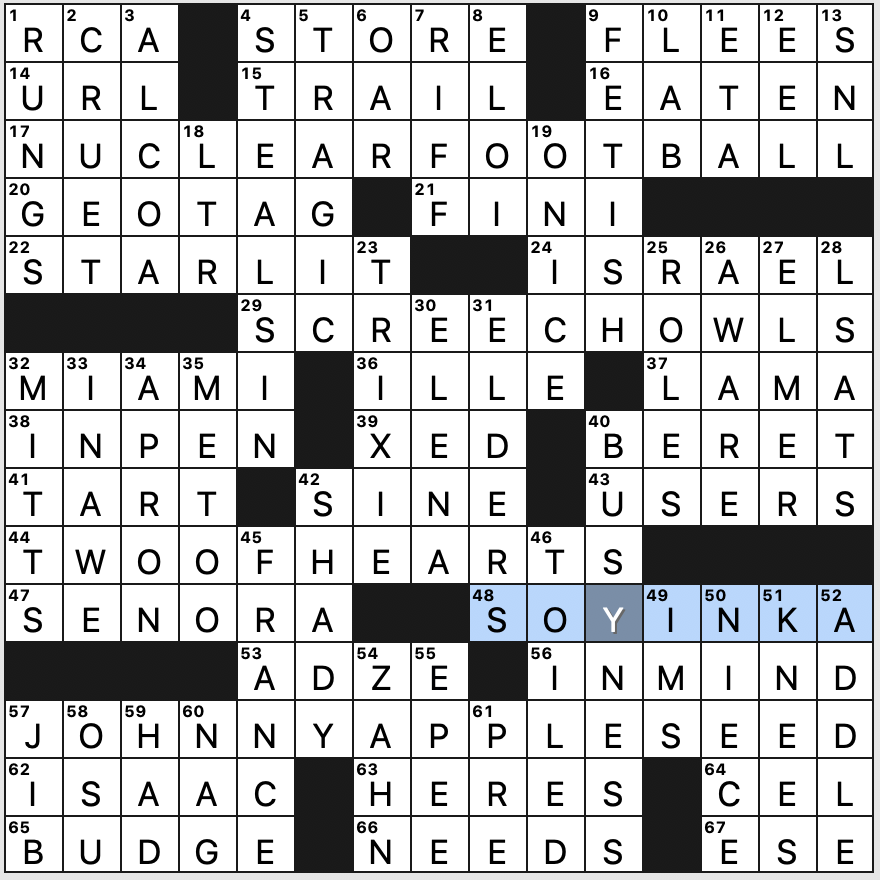 As happens on occasion, the official online version of this puzzle on the WSJ site is messed up. Across clues stop at 63a, and there are no Down clues. Thankfully, Fiend friend Martin is able to get a .puz version for our site. However, I noticed it doesn’t feature any circles where the official puzzle does. Those circled letters are for the dog sounds I highlighted above.

As for the theme, it’s not bad as far as hidden word themes go. It’s not wholly consistent in that three of the dog sounds are onomatopoeic whereas HOWL is not.

Most of the grid is filled in just fine, but Monday puzzles are historically kind to new solvers. This one has some tough fill that newer solvers might not know like ELOI, ILLE, ADZE, and Nigerian author Wole SOYINKA, who won the Nobel Prize for Literature in 1986. I’m all for learning new-to-me proper names, but the crossings have to be fair. I finished with an error because I thought 40d [Hectic activity] was BUSINESS and I never, ever would have considered it to be BUSYNESS. 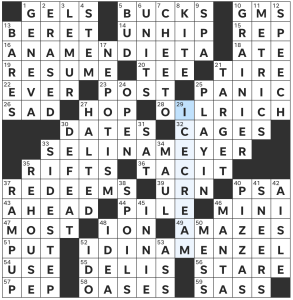 This puzzle contains three answers that are names of people which contain the string NAME– each one is a “name name,” if you will. SELINA MEYER and IDINA MENZEL were gimmes for me– entered with zero crosses, but I have never heard of ANA MENDIETA, an artist who was a part of Operation Peter Pan. (I read this book about Operation Peter Pan when I was young.) (CW: If you look further into her art, she discusses rape and violence against women.)

Nice to see ICE CREAM, the best dessert, in this grid. I was just in Mexico City for a few days where it seems like there was an ice cream store on every block. In New York City, it is very trendy to do weird savory flavors like mac&cheese or floral flavors like lavender. No thank you!! 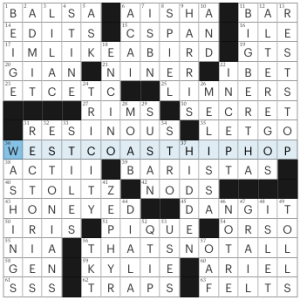 Atypical write-up format today, because why not? Pitched to Saturday NYT difficulty, spot on for a Monday New Yorker puzzle.

Fave clue: 39a. [Mudslingers?], BARISTAS. Definitely had me at a loss for a while.

Music! WEST COAST HIP-HOP is clued [“2001” genre], and first I thought of the sci-fi novel and movie. Wondering who the artist was, I googled 2001 rap and boy, does that search query give you a lot from the year and very little for a numerical title. Appears to be the title of a late-1999 Dr. Dre album. Also in music, a Nelly Furtado song, I’M LIKE A BIRD, clued [Lead single from the 2000 album, “Whoa, Nelly!”]. Had never heard it before, it’s kinda catchy.

Not music! [Pitchy] clues RESINOUS, having to do with sticky pitch, and not bad singing.

Really?: 22d. [Take on as a member], INCEPT. Not sure I’ve ever encountered this usage. 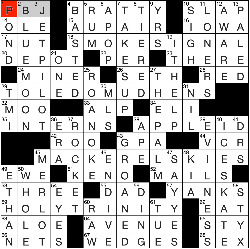 Los Angeles Times 6/27/22 by Will Pfadenhauer

Let’s head down to the revealer at 59A [Christian doctrine of divinity, and the starts of the answers to 18-, 29-, and 45-Across?], which gets us HOLY TRINITY. No, not FATHER, SON, and HOLY GHOST; the question mark in the revealer indicates that something else is going on, and that something is that HOLY can be placed before the first word of each theme entry to make a new phrase.

The grid overall is fine, with some unusual but totally legit for Monday entries like BRATTY, JET PILOT, and BLUE MOON. But I think this puzzle could’ve been improved by taking away the constraint that the constructor was clearly looking for [HOLY ___] exclamations — other words that follow HOLY but aren’t exclamations, like SEE, WATER, and FAMILY could, I think, have produced theme phrases that are more appropriate for Monday. 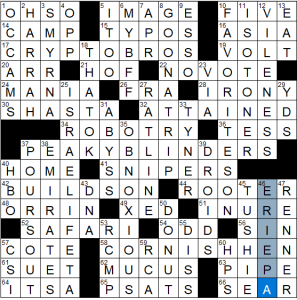 First of all, apologies for missing a bunch of reviews lately. My father-in-law passed this past Friday after escalating complications from surgery a week prior; it’s been hectic to say the least and I’m now in rural Missouri for another week (though I will say that Thursday’s RDU-DCA-ORD-COU flight itinerary went totally to plan, somehow).

Back in the saddle, I got a toughie from BEQ this afternoon. The biggest issue was my errors – “BUILDS UP” instead of BUILDS ON at [42a Develops] right next to “LED” instead of XED for [49a Made one’s mark, e.g.], which totally muddled up the middle for a while. But I also wasn’t a huge fan, for various reasons, of GO ON A TRIP, ERIE PA, ROBOTRY, or VILENESS. I had ISRAELI FETA [25d Crumbly Middle Eastern cheese] in that list, but with some Googling I see that it is distinct from other fetas — mellower and less salty. So fair play there.

My own preferences aside, I appreciate a tougher themeless that’s consistent throughout the grid – I had both footholds [SMYRNA, RENNER, ISOTONER] and sticking points [ORRIN, TYNER, etc] in each area, so I made steady progress. I don’t like CRYPTOBROS [17a Dudes big on staking BTC and collecting NFTs] necessarily, but it’s certainly grid-worthy. CORNISH HEN [58a Broiler alternative] was a nice clue that took me a minute to dig that meaning of “broiler” out of my brain.