Y’all, I”ll be honest – Friday’s SCOTUS decision overturning Roe v. Wade has sapped me of pretty much any motivation to do much of anything. Thankfully, a glimmer of joy appeared in my solving feed today – a Sunday NYT by two super fun constructors. Their puzzle also came with a bonus feature right off the bat: a teaser drawing us into the puzzle which says, “When you’ve finished the puzzle, look for an appropriate hidden word.” Intriguing! Let’s dive in: 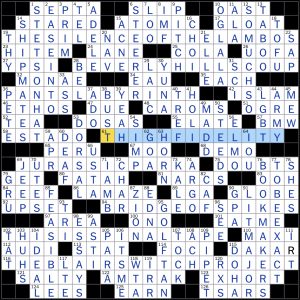 19A: THE SILENCE OF THE LAMBOS [What you’ll hear after-hours at a sports car sales lot?]
28A: BEVERLY HILLS COUP [Rodeo Drive uprising?]
36A: PANTS LABYRINTH [Twisted jeans legs?]
61A: THIGH FIDELITY [Staunch dedication to one’s upper leg exercise routines?]
69A: JURASSIC PARKA [Winter wear for a stegosaurus?]
94A: BRIDGE OF SPIKES [Tire-puncturing way across a river?]
102A: THIS IS SPINAL TAPE [Introduction to a chiropractor’s makeshift toolkit?]
116A: THE BLAIR SWITCH PROJECT [Campaign to convince British P.M. Tony to change parties?]

Now, to look for the “appropriate hidden word”: if you keep track of the extra letter in each of the theme entries, they spell out OUTTAKES. Super cute! I enjoyed this theme for a number of reasons: all of the entries are super famous movies, they’ve all been modified by the addition of a single letter outtake (in the order of OUTTAKES), and many of the theme entries ended up as really fun, campy reimaginings of the base title. I cackled with glee when I figured out PANTS LABYRINTH and THIGH FIDELITY – at that point, I was only halfway through the puzzle, but texted the constructors to ask, “Is this a Pride month puzzle?!?” I wonder if the original title of the puzzle had something to do with (movie) extras and the OUTTAKES letters being those extras? The only ding I have against the theme is with BEVERLY HILLS COUP since, well, our democracy nearly toppled thanks to Trumpist insurrectionists and their attempted coup. That entry brought me out of the puzzle, but it was otherwise a quick, enjoyable solve for me. Now I’m wondering what add-a-letter movie titles got lost to the cutting room floor. Can you think of any good one? Let us know in the comments section.

The other thing that stood out to me about this puzzle is that people should get to decide what happens to their own damn bodies. Bodily autonomy and reproductive freedom are essential and fundamental rights that should be guaranteed. This recent SCOTUS decision is a travesty and is not supported by a vast majority of American citizens. We must do what we can to ensure a better future for our next generations.

I must confess that my favorite part about this puzzle was learning about the world’s most boring video game created by two of my favorite performers, Penn & Teller. The clue [“Desert ___” (satirical video game conceived by Penn and Teller involving a drive from Tucson to Las Vegas)] gives us BUS. And this video describes the origins of it as a response to parents losing their minds over the violence in 90’s hit games like Mortal Combat. Check it out:

That’s not to say the puzzle was boring at all. Rather the opposite. I largely solved as a themeless actually, occasionally using the synergy offered by the theme.

THEME: Types of houses can be found hidden in every other letter of a common phrase. 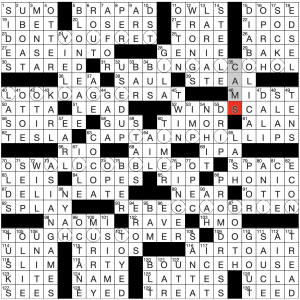 Cute revealer! I’m just seeing two of the houses for the first time writing it up now: IGLOO and TIPI (I had just plunked in the answers and hadn’t looked at the circled letters for those two). Don’t think I’ve seen TIPI spelled that way before. ADOBE and CABIN were the two that I used synergistically with the entry since I knew neither of those names, though OSWALD COBBLEPOT sounds familiar in retrospect. And, I mean, if anyone looks like an OSWALD COBBLEPOT it is Danny DeVito.

LOOK DAGGERS AT and TOUGH CUSTOMERS don’t necessarily strike me as in-language phrases, especially the former. I think if I were talking about someone looking at me with daggers in that sense, I would say “shoot” as in “She’s really shooting daggers at you!” Could be regional. I’m clearly wrong about TOUGH CUSTOMERS though. It googles fine, it’s in an idioms dictionary as a stand-alone, and there’s a bestselling book with that title. I think I just use the word “asshole” most of the time with those types.

Trickiest area for me was the OLDS/SPLAY/NYAH/ASIAN GAMES part in the west. Funny how it always seems so obvious post-solve, but I really struggled in that spot!

I also had WINDOCALE, which I accepted as a term I did not know (rhymes with Popsicle?) instead of the correct WIND SCALE because I just assumed CAMO was correct coming down. After all, the clue had the word “gear” in it, and I had CAM? – so I figured it must be CAMO! Had to go correct that spot later when Mr. Happy Pencil failed to appear. The clue [Footage gear, briefly] refers to CAMS, or CAMeraS. Not CAMO.

I feel like this is at least the third time I’ve solved a WaPo with a “types of house” theme. Not that it matters, but I am sort of curious if I’m correct. Don’t really know how to go about searching that up in the archives, and I’m pressed for time. Enjoy Sunday!

The revealer is WATER UNDER THE BRIDGE (65a, [Metaphor for past disagreements that’s literally depicted in each pair of starred clues’ answers]). The pairs of starred clues’ answers are stacked atop one another with the top entry being the name of a famous bridge, and the bottom one a familiar phrase that features a word that is also a body of water. 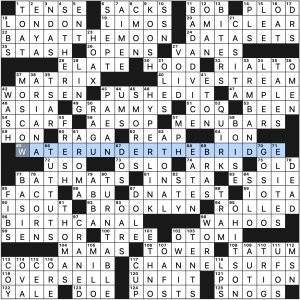 This is a pretty complicated construction with all those stacked entries. But it’s handled quite nicely and there’s a smooth flow to the puzzle. I enjoyed all the “water” phrases, and I especially liked the RIALTO/STREAM combo because they’re lined up perfectly.

However, I can’t deny that I wished that all the entries were as evenly aligned as that one with the body of water sitting perfectly underneath the bridge entry. Maybe that’s not possible, but still I wanted it.

The long fill is quite fun with BAD ADVICE, “SO THERE!,” HYPERLINK, TURNTABLE, TUT-TUTS, “AM I CLEAR?,” PUSHED IT, MENU BARS, BATHMATS, WAHOOS, GO SOLO, DNA TEST, and especially “OH, IT’S ON!”

I had trouble trying to fill in PAEAN [Sung ode] as it’s been a long time since I encountered that word, but the crossings seem fair to longtime solvers. (Newer solvers may have stumbled at the crossing with the second A in RAGA.) Also, COCOA NIB was difficult to parse when I had ___ANIB in place. Again though, the crossings cleared things up. And OTOMI [Indigenous Mexican] was new to me, but I enjoyed learning about them. 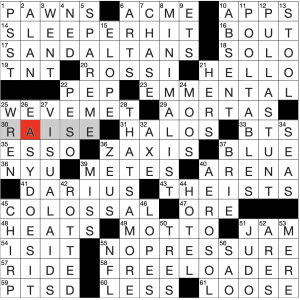 I am still very confused as to what differentiates a Themeless from a Freestyle. My guess is that they simply want to keep the names organized so that one is on Saturday and one is on Sunday. I suppose they simply have a bunch of themelesses in the pipe and see an opportunity to clear is up a little with the Sunday 15x, which seems to be the red-headed stepchild of Universal: Difficult (impossible?) to find online where the Andrews McMeel web page features Saturday’s puzzle for two days and Sunday’s 15x not at all. There’s a few things that confuse me about Andrews McMeel, but of all the issues, publishing the correct puzzle on a Sunday seems the most fixable without a sweat.

Anyway, puzzle itself was fine! New to me: EMMENTAL (needed every cross, but crossed fairly) and DARIUS Garland. Cute clue for CHIRP [Tweet alternative?] especially below a WREN :)

PULL A STUNT gets a little side-eye from me as a non-phrase imo. Either that or very dated.

Editor:  Amanda Rafkin
Theme: Each vertical theme answer contains the string “teem”, which can be read as “meet” moving upwards. 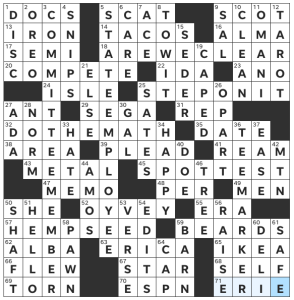 Sophia here again covering for Darby! My thoughts on this puzzle: 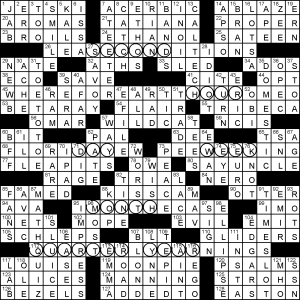 The title of Roland Huget’s puzzle, “Stretches Across”, doesn’t give away much. The final down revealer, TIMESLOT, is more telling: as indicated by the circled letters I’ve added for clarity, each of six answers have a hidden unit of time, arranged in order from small to big. I also circled QUARTER as a seventh answer, but I’m not sure it’s intended as one. WHEREFOREARTTHOUROMEO is by far the strongest of the theme answers as a stand-alone entry – a full 21-width spanning phrase!