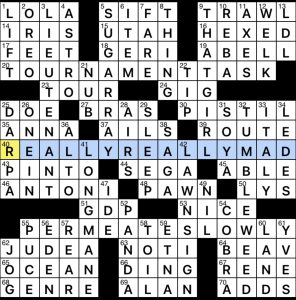 What’s going on with this week’s Jonesin’ theme? The three longest entries’ clues refer to other entries, and it looks like Matt left out some spaces, too: 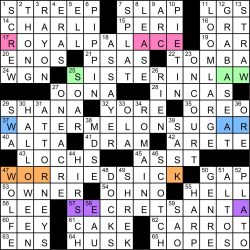 Hello there, everyone! I hope you are all doing well and getting ready for the holiday weekend that is to come!

We have some seriously horseplay going on with today’s grid, especially when looking at the circled boxes in each of the five theme entries. Those entries, when combining the letters that are circled, end up splitting up a word that can come before the word “horse.”

The adjoining 9-letter entries in the corners of the grid were the big highlight for me, with the ones in the northeast, LOOM LARGE (11D: [Appear imminent]) and GRAB A SEAT, the standouts of them all (12D: [“Pull up that chair!”]). Can’t wait to get the opportunity to be ON COURT and hit a few balls, as that’s one of the activities I’ve promised to do this summer (23D: [Like most tennis-training sessions]). Been about six years since last hitting a tennis ball on court, and that’s way too long. In incoming summer weather also means that there’s the chance for many of you to take out the THONG that you’ve had buried in your dresser drawer and put it on just in time for those relaxing times to the beach (2D: [Daring, baring swimwear]).

“Sports will make you smarter” moment of the day: TOMBA (22A: [“La Bomba” of skiing]) – I can tell how much of a Winter Olympics junkie I am by being able to plop down TOMBA upon reading the clue, and we will talk about one of the greatest skiiers  — and shot-callers — who ever lived. Tomba won gold in both the slalom and giant slalom in the 1988 Olympics in Calgary, winning the former by .06 seconds. Soon after winning double gold, he attended the women’s figure skating long program to see German superstar Katarina Witt perform. Before the figuring skating program, Tomba, who eventually asked Witt out, famously said, “If Katarina doesn’t win the gold tonight, I will give her one of mine.” Smooooth! Tomba also won gold in the giant slalom in the 1992 games in Albertville while earning silver in the slalom in both 1992 and the 1994 Olympics in Lillehammer. 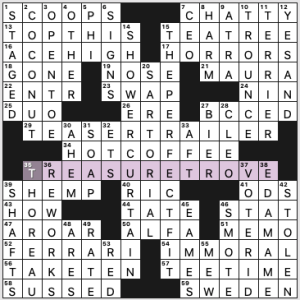 How unusual! A 66-word puzzle on a Tuesday. It plays like a themeless with easy clues, and the theme is quite understated: Two-word terms with T.T. initials.

What just popped out at me from this list is that each clue starts with a T—and in fact, every clue in the puzzle begins with T. That explains the unusual “Trapeze” clue for Anais NIN, and a Cars song title I’m not familiar with for RIC Ocasek. Totally didn’t notice the T clues while solving! Am usually not a big fan of that sort of cluing stunt, but the puzzle still played like an easy Tuesday puzzle despite the tormented clues, so I can’t really complain about this Two-Fer Tuesday theme.

THEME: Z is added to the front of common phrases to create wacky new ones. 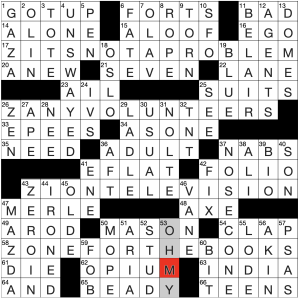 I warmed up to this one after a bit of a rough, frustrating start. I just kept stumbling over my own metaphorical feet: OLAF for OLAV, TORE for TORN, ALIENS for AGENTS, and brainfarts on BLUE, BEL AIR, GAZA, OLIN, and UNSWAYED. Wechsler puzzles often have me flailing around, but I got a hold of myself after the top third went awry and finished strong.

Themewise, it’s an oldie but a goodie. All the phrases landed for me and the bases are solidly in-language. Only nit is that I don’t like when pronunciation changes from base to modified phrase, as it does in ZONE FOR THE BOOKS vs. ONE FOR THE BOOKS (ZONE and ONE sound nothing alike) and ZANY VOLUNTEERS vs. ANY VOLUNTEERS.

Nothing much of note in the fill. Standard crossword fare. BEADY was the Wordle word a few days ago. So that’s fun. Somehow I got it in two guesses because I started with the word READY that day.

Anyways… 3.25 stars from me! Right over the plate today. 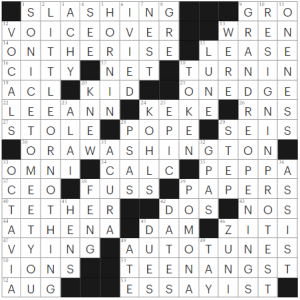 Despite the two six-block B-2s, this is a well-integrated grid, buttressed by an H-shape formed by stacked vertical fifteens and a central across thirteen-letter entry featuring—what else?—a female basketball star: 30a [Basketball Hall of Famer and eight-time American Tennis Association champion nicknamed the Queen of Two Courts] ORA WASHINGTON.

Solid themeless which I found to be somewhat tougher than Monday’s, due entirely to that niggling section mentioned above.

I’m back! We had a wonderful six weeks of travel and adventure and were very very very lucky – no serious travel delays and only one very mild case of COVID (my kid, several days after we returned from Europe. She’s fine). I also had my first experience responding to a medical emergency during flight. I’m now tempted to travel with my own complete first-aid kit because the supplies on board were seriously lacking. Luckily we didn’t need much, the “patient” was not dangerously ill, and all was well.

There is a puzzle to write about! There are four theme answers, two in each direction, all starred to help us find them. 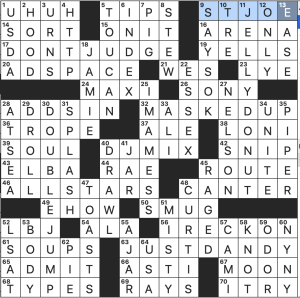 I was pretty sure I knew where this was going, and I was right. The revealer is at 40a: [Dance club compilation, and what the answer to the starred clues literally are]. The answer is DJ MIX. The theme works and all the theme answers are solid. It’s a fine Tuesday theme. 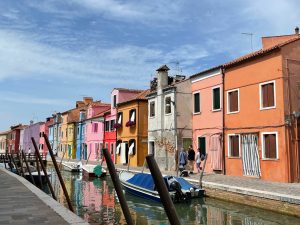 What I didn’t know before I did this puzzle: that ST JOE is in northwest Missouri. Geography is seriously not my strong suit.

Theme: Things that have to do with FRAMING (36a, [Activity associated with each of the starred answers]). 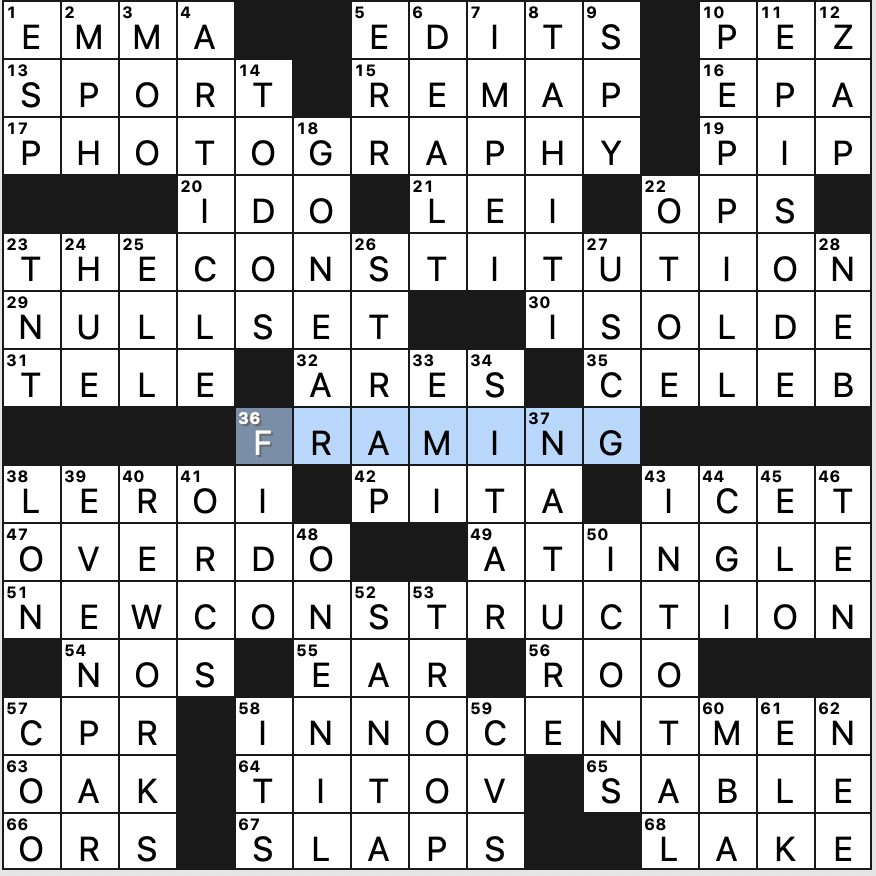 I like the use of the different meanings of the word FRAMING. Interesting that there’s no usage here of actually putting a picture in a frame—not even in the title.

Not a lot of long sparkle in the fill, but I do like NULL SET, PEP PILL, and TAHITI (where I learned what it feels like to step on a sea urchin—spoiler: it hurts!). I’m not sure how I feel about ATINGLE, but I think I like it. However, I’m not so keen on TITOV [Second cosmonaut to orbit Earth] as fill. We’re supposed to know that? The crossings were fair enough, however.

A tougher one for me today but still enjoyable with great fill and clues! 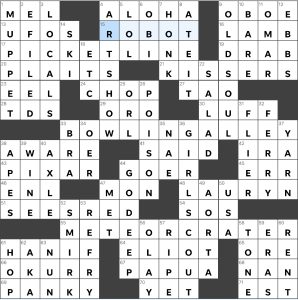 Theme: each themer is a type of “strike”

A fun theme today and a nice set though I found it a bit more challenging than usual. PICKETLINE is a group of people in an area striking like a company or corporation, sometimes for union rights or over pay, etc. BOWLINGALLEY has lanes with 10 pins that if all knocked over is a strike. METEORCRATER is a little stretch for me (and if you have a better explanation then please let me know in the comments) but I think it fits because the space rock strikes the ground. With the same cluing, I relied on crossings today, getting the second themer then the third and finally the first, given that the NW corner gave me some trouble today—see the stumpers below.

Stumpers: PLAITS (new cluing for me and the crossings weren’t fully helping today), LOCALS (cluing makes perfect sense now but it just wasn’t clicking for me during the solve), and OKURR (not seen it this way before so needed all crossings)

So much other wonderful fill, especially bonus fill, and excellent cluing!