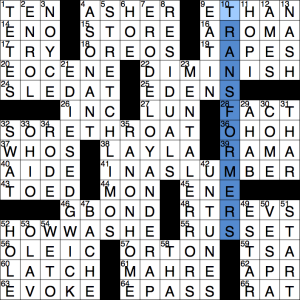 hello and welcome to episode #734 of matt gaffney’s weekly crossword contest, “Three-on-Three Matchup”. the instructions for this week 4 puzzle tell us that this week’s contest answer is one of the entries in this grid. okay. what are the theme answers? i don’t know. there are four 12s in the grid, all running down:

in addition, there’s a nonsensical 15: {Weaken support for both actress Myrna as well as digital music by Dr. Dre} ERODE LOY AND E-RAP. matt says that this bizarre answer is not meta-related, but needed to make the meta work. i will take that at face value, since the grid is pretty ambitious: only 70 words, which is a very low word count for a themed grid. there’s also a bunch of unusual/unfamiliar shorter fill, like NOYCE, EPASS, BACHE, GBOND, SLED AT, UNTUNES, etc. but none of that is unexpected given a 70-word grid with, presumably, some large amount of theme content.

both STRETCH LIMOS and TRANSFORM ERS look like cryptic crossword instructions, for a letter bank on LIMOS and an anagram of ERS. but this is not it, i’m afraid.

what could the title refer to? i don’t think it is the three-letter words in the grid, of which there are 10: TEN, HOE, ENO, TRY, INC, LUN, MON, ENE, THA, TSA, APR, and RAT. i guess the presence of both LUN and MON—both abbrs for the same day of the week in different languages (and in fact, MON is notably duped in the clue for LUN)—is interesting, but the others don’t pair off neatly.

could it be the black squares? the striking thing about the grid pattern is that all 36 of the black squares are grouped into twelve 1×3 horizontal or vertical bars. that could easily be the weird constraint that required the use of a nonsensical 15-letter answer down the middle. that actually seems kind of promising.

the fact that the long answers are 12 letters perhaps suggests dividing them into four trigrams each, but again, doing so doesn’t really lead anywhere.

well, i suppose i have a 1 in 70 shot at guessing the right answer. maybe even 1 in 69 since matt did say explicitly that 7-down was not meta-related. i kind of would like to pick a 12-letter answer since there are twelve bars of black squares in the grid, so i guess i’ll go with … i dunno, TRANSFORMERS. but i’m feeling kind of down about having whiffed two weeks in a row. last week i mentioned the possible meta mechanism in my writeup but it didn’t click for me so i didn’t pursue it; this week i would not be surprised if i have just not gotten anywhere near it. oh well. 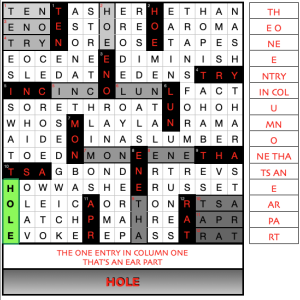