Hi, all! Happy July – I hope this post finds you doing well, or at least hanging in there! Today’s NYT has some flavortext that we should note:

“Seven clues in this puzzle relate to their answers in a manner for you to discover. Standard clues for these answers appear below in mixed order.” (I’ll include the listed clues alongside their matching entries below.) 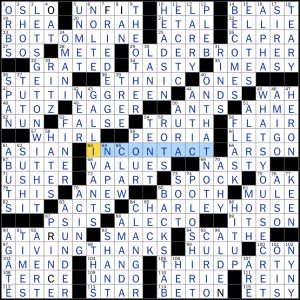 It feels like there is another layer / level to this, but I’m not seeing it. I’m not quite sure I understand WHY each shorter phrase is expanding into the theme entry phrase in the grid, as there doesn’t seem to be another consistent parameter aside from the first letter sound turning into that letter and then being part of a larger, unrelated phrase.

The execution of the theme also felt a bit inelegant for me in that five of the themers used the actual first letter, while the other two only used the sound of that first letter. I guess I’d’ve preferred all of one or the other, unless there’s another layer to the theme that I’m missing. Please help me out in the comments section if there is. HELP!

Other random thoughts:
– 32A: GRATED [Like some cheese … or some movies] – GRATED / G-RATED. This nicely scratches the cryptic clue itch in my brain!

– 40D: ON THAT NOTE [Transitioning phrase] – This almost felt like a bonus theme entry where the smaller phrase (ON T) also relates to transitioning. There’s a there there!

– 19A RHEA / 20A NORAH / 22 ELLIE – This puzzle featured more women in a single line across than many feature in the entire puzzle. It’s a low bar, but kudos all the same.

That’s all from me for now. Take care, stay safe, and be well!

Theme: UKRAINE (68a, [What the starred Down clues’ answers stand with, given the letters added to their tops and bottoms]). The theme answers “stand with” UKRAINE by adding the letters BLUE (at the top) and YELLOW (at the bottom) while still being actual words/phrases after the change. 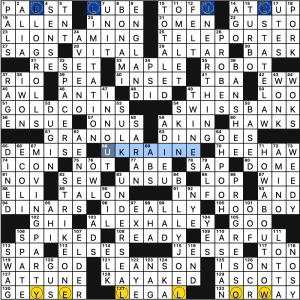 Excuse my grid image. I used the actual correct colors for the letters, but when you look closely at the blue squares, they look terrible.

At first, I was confused when I hit upon the revealer. How was adding letters to the tops and bottoms of answers “standing with” UKRAINE? But I’ve come around after giving it some thought. First, the entries are vertical, so you can think of them as “standing.” Second, many individuals and businesses added the Blue and Yellow to show their support for UKRAINE. This puzzle adds the Blue and Yellow by tacking on those letters to existing phrases while ensuring we still have valid phrases in the grid. Pretty nice, actually. And I’m especially impressed that our constructor found entries as long as these to incorporate.

I just noticed the grid has left/right symmetry instead of the usual diagonal symmetry. This makes sense since the top has four theme entries, and the bottom has six. You’d think, therefore, that the bottom half would be quite choppy and constrained, but there’s still some nice fill in there like ALEX HALEY, “HOO BOY!,” and “OH, POOH!” The top half, though, is loaded with goodies like LION TAMING, TELEPORTER, GOLD COINS, SWISS BANK, BON AMI, ENGLAND, BANSHEE, IN-N-OUT, GRANOLA, and DINGOES. You can really see the result of theme constraints in this one grid from the top half to the bottom half.

Most of all, I’m impressed that this is a debut puzzle for this constructor. It doesn’t look it, but this is a complicated construction, and yet the grid is smooth and enjoyable, and the theme has some lovely wordplay. Kudos on this excellent construction! Four stars.

The notepad tells us that we’re looking for a Grammy Award-winning song.

I just finished solving the puzzle and haven’t even started considering the meta as of now. It didn’t reveal itself to me mid-solve, as often happens with the more simple WaPo metas, so let’s see if we can’t hash this out now.

There are quite a few longer entries (many of which struck me as unfamiliar or a tad awkward) and a curious clue in the SE. The entries I’m going to focus on at the moment are:

and the nudge down south:

[Like the third letters of three-letter answers (many of which you’ll need to solve the meta)] LAST.

Now what? Am I supposed to look at all of the three-letter entries? That’s asking a lot. There’s 64 of those in the puzzle. So there must be a way to whittle down the ones I need. Wait a second… what am I doing? Step 1 of meta solving: Look at the title.

State of the Art.

And immediately state nicknames jump out from the entries above.

How many did you google? For me, about half. But that’s clearly the key to solving this meta. Now what? Let’s peep that nudge again:

[Like the third letters of three-letter answers (many of which you’ll need to solve the meta)] LAST.

I’ll say it again: I’m not gonna examine 64 entries for this puzzle. However I just glanced at the grid and my EYEs landed right on UTA… which is very reminiscent of UTAH. Let’s see if that yields anything… maybe the three-letter words we should look at begin with the state abbreviation, and then we take the third letter of each to spell out our meta. That’s my guess. Let’s see:

*before we go any further, if you haven’t seen this bit yet about state abbreviations, it’s very entertaining:

And out meta answer is THIS IS… ‘MERICA?

Wow! That’s a helluva idea, and so well executed. I must confess, I wasn’t really in a meta mood. And I wasn’t “feeling it” during the solve with some rather (imo) tuff-to-suss longer entries. But once again, Evan has outdone himself with a multi-layered brilliant meta, perfect for July 4th. Just… wow. That’s a lot of theme entries too! So I won’t nitpick in the fill. Okay.. I’ll nitpick one spot: SALVO / ORR was a Natick crossing for me. I may be alone there, and I did guess the O correctly, so there’s that. But I think that’s the first time I ever felt a need to flat out guess in a WaPo.

The INTRANET, ABASH (I had ABASE), DAMN (I had DOOM), BET (I had LOT), STRAND (I thought it was something that had to start with D or N or A), SHOW ME THE WAY (I had COME SAIL AWAY [Top 10 title for Peter Frampton and Styx]… I mean c’mon… that isn’t fair. Same number of letters! And the last three are the same!) HACK AT section I found very difficult as well. But I HACKed AT IT and got it eventually!

The fact that before I even started this puzzle I had a “meh” attitude and wasn’t much in the mood for solving (or writing), and by the time I figured out the meta my attitude completely changed… well that’s a huge testament to this fantastic offering today. 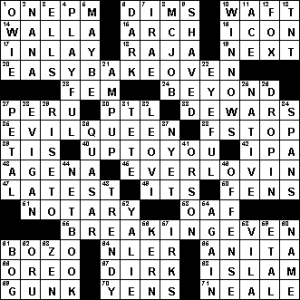 The title of today’s offering by PAK, “Ease Off”, had me thinking it was a letter drop theme. Instead it’s the rarer sound change theme, where the “iː” sound becomes “eɪ”. This is quite an open-ended theme type, so one should be able to attain some real lulus.

The clues were quite straightforward today. The main resistance was from several tougher entries:

Theme: The end of each theme answer is a game title! 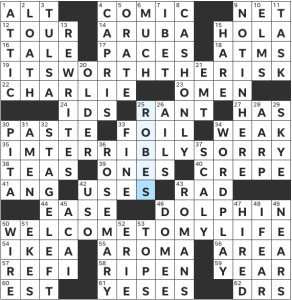 I knew immediately from the title that this was Part II of an incredible Avengers Infinity War/Endgame USATXW duet, and after solving, it became apparent that this reference was also to one of my favourite things: board games. So, needless to say, I was all about this puzzle. I loved that the theme answers were also all clued as statements, which I think lent a really nice symmetry throughout. Plus, they were all grid-spanners! Such a great combo.

All in all, a great puzzle.