This week we’re looking a well-known singer. There were lots of paired Z’s in the grid. I spotted the ZZ Top theme before filling the final horizontal grid entry (ZZTOP, clued as “Rock band from Houston, or where to look for the contest answer”). 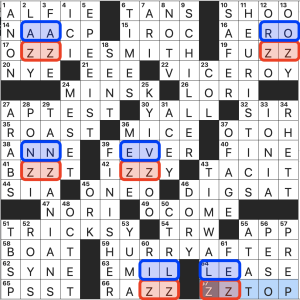 The rest of the meta fell quickly: there were six “ZZ” theme entries and the letters on TOP formed a well-known singer:

The letters on top of ZZ spell AARON NEVILLE, our contest solution. I thought it was neat that ZZTOP served as both a clue and a themer. Solvers: let me know what you think. We’ll end with The Neville Brothers.