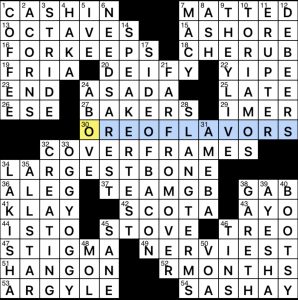 I hope everyone in the United States had a safe Fourth of July. This week Matt gifted us with a themeless for his 1100th (!) Jonesin’ puzzle. Congrats, Matt! This grid took me a while and required some Googling to get a few entries. Let’s touch upon some of the more memorable or less common entries… 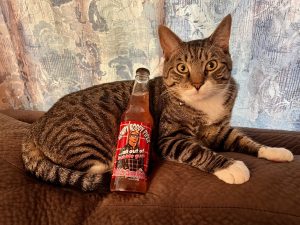 Thwomp the cat with the bubble gum soda 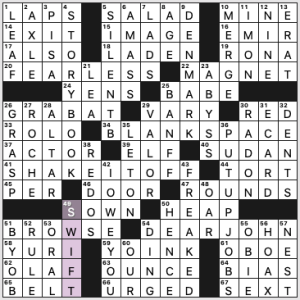 Today’s debut duo are med students at Baylor, and they are off to a good start as constructors.(Probably also as physicians-to-be!) I didn’t notice all the starred clues for shorter answers, just the four long Acrosses—but there are three short themers, too. The revealer is 49d. [Taylor ___, some of whose hit songs are featured in the answers to the starred clues], SWIFT, and those song titles are all clued without reference to Taylor’s oeuvre: MINE, FEARLESS, BABE, RED, BLANK SPACE, SHAKE IT OFF, and DEAR JOHN. I knew the two 10s, and Red and Fearless double as Swift album titles. I was slowed down a bit pre-revealer by wanting to WALK IT OFF with that minor injury. Just me? Also: Not convinced that the puzzle needed to have the three short titles in asymmetrical spots along with the four long titles.

If you are ignorant of pop culture, you could complete this puzzle without a hitch. So no fair complaining that you shouldn’t be expected to know the work of a massively successful singer/songwriter who’s been thriving for the past 16 years, as well as making headlines for having a jackass purchase the masters to her albums (inspiring her to re-record her albums, note for note, so that she owns the masters—savvy!).

Fave fill: YOINK, STORYBOOK romance, FREAKED, and BANFF. Tough for a Tuesday: OBIE. Going to echo Sophia’s comment yesterday about phrases like GRAB AT not being great fill. 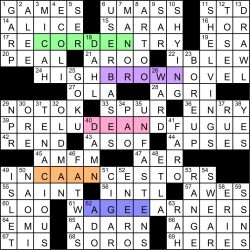 Hello there, everyone! Here is hoping that you all had a good time celebrating the holiday, and also hope that no one hurt themselves setting off any sparklers or fireworks!

Today’s crossword has a pretty cute theme, especially when taking a gander at the title when first looking at the puzzle. Each of the five theme entries have circles in it, and when filled in, spell the last name of a celebrity whose first name is James. The circled letters span at least two words in those entries, creating that “bond.”

Took a little while to catch on to the theme since I was not getting the circled letters filled fast enough, but was worth the wait in knowing what was happening. Also got slowed down when I put in “unbuckles” instead of UNFASTENS (35D: [Detaches, as a seatbelt]). Also can’t help think that I need something related to a baseball when asked about an item kept in a humidor instead of a CIGAR (51D: [Humidor item]). I remember about almost 20 years ago my oldest brother being obsessed with “Dragon Ball Z” and GOKU and training in areas 50 times the force of gravity and not knowing what the heck all of this was about (26D: [“Dragon Ball” protagonist]). Little did I know that the show, and its spin-offs, was getting ready to be the most popular Japanese anime in the coming years, and maybe ever! Time to train hard now and become a Super Saiyan!

“Sports will make you smarter” moment of the day: UMASS (6A: [Amherst campus, in short]) – The finest hour in UMass athletics came in the 1995-1996 school year, when its men’s basketball team ended the season and entered the NCAA Men’s Basketball Tournament as the No. 1 team in the country. The team, coached by John Calipari and featuring future No. 2 overall NBA Draft pick Marcus Camby, won its first 26 games of the season, including a win over then No. 1 Kentucky in the regular season opener. The Minutemen reached the 1996 Final Four, held in East Rutherford, New Jersey, but lost in the national semifinals in a rematch against the Kentucky Wildcats. (Kentucky would then beat Syracuse in the national championship game two days later.) UMass ended the season 35-2, but their Final Four appearance was vacated by the NCAA one year later due to Camby receiving improper benefits from an agent. 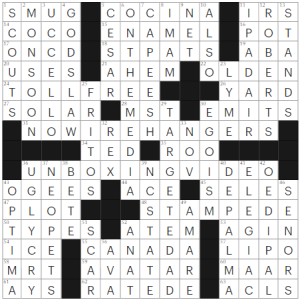 Nice, smooth grid here, anchored by two 13-letter marquee across entries in the center: 31a [Menacing reprimand in “Mommie Dearest”] NO WIRE HANGERS—was there also violence in that scene? I’ve never actually seen the film, but I know the reference; 36a [Footage of an opening act?] UNBOXING VIDEO, which is a social media phenomenon thingy. 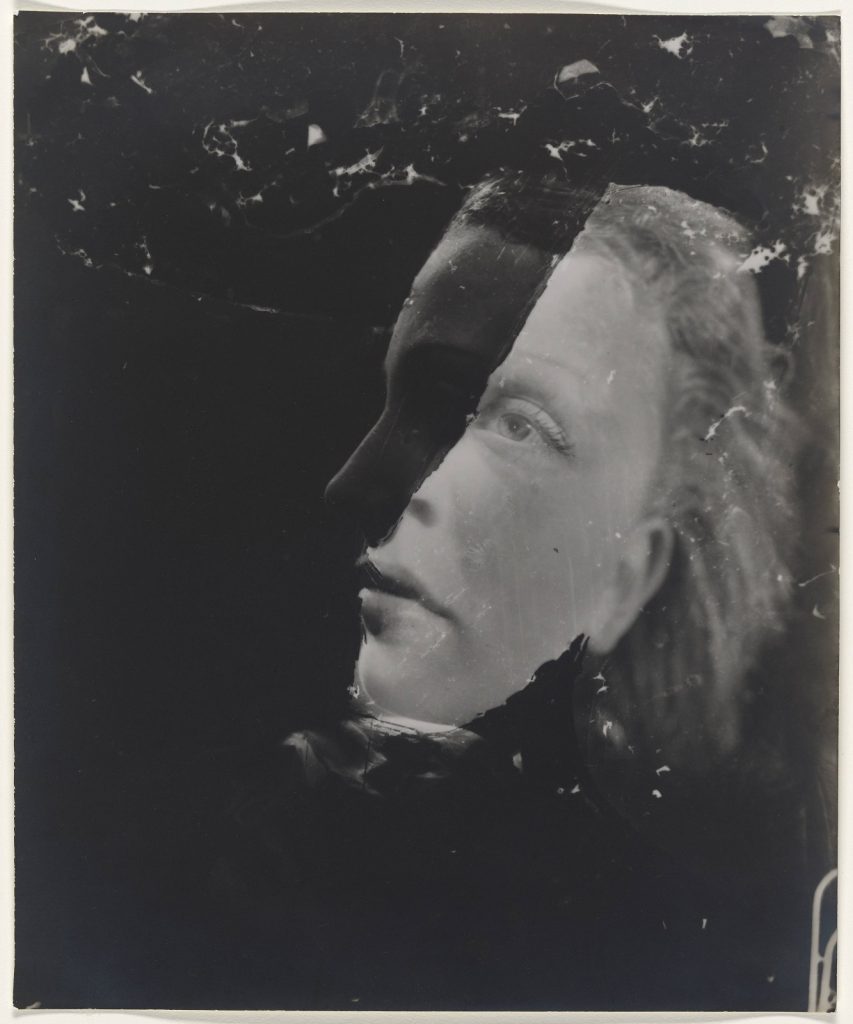 Quickly before I head to the beach: I liked this puzzle and didn’t figure out the theme before I got to the revealer. 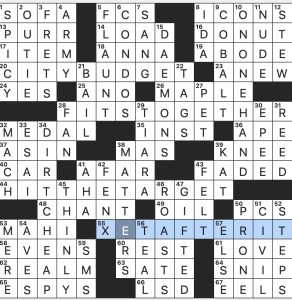 And the revealer at 55a: [“Seize the day!,” and what the starred clues literally have] is GET AFTER IT. Which they do!

I will seize the day by the sea!

Apt for the WSJ, this puzzle’s revealer is the financial term BACK-END LOADED (49a, [Like mutual funds that charge a fee on exit, and a hint to 20-, 25- and 43-Across]). Those other theme entries are familiar phrases whose final words can follow the word “loaded”. 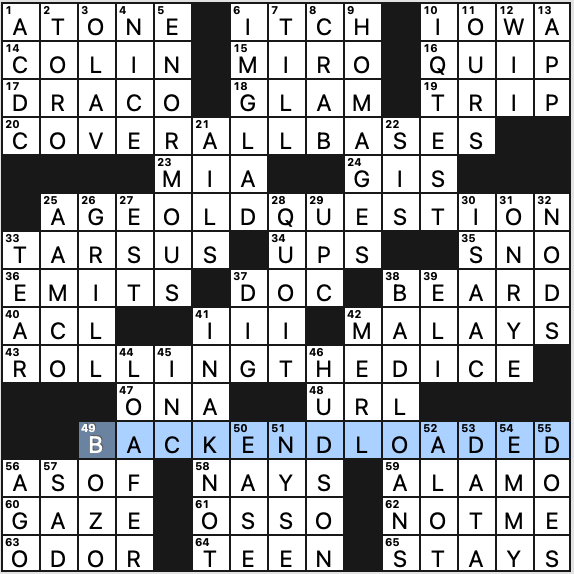 Loaded bases, loaded question, loaded dice. Nice. I enjoyed the aha moment when I hit upon the revealer. Although I have to say “bases loaded” sounds more common to me than “loaded bases,” but I guess it depends on context.

The long fill is solid though not especially sparkly. BAD LOANS feels a bit green paintish but the rest is fine: ENORMOUS, HOMAGES, HUDSON, IN A KNOT, “I’M GLAD.” I had to google (post-solve) what a QUOIT [Horseshoe’s cousin] looks like because it’s been a while since I encountered that word. 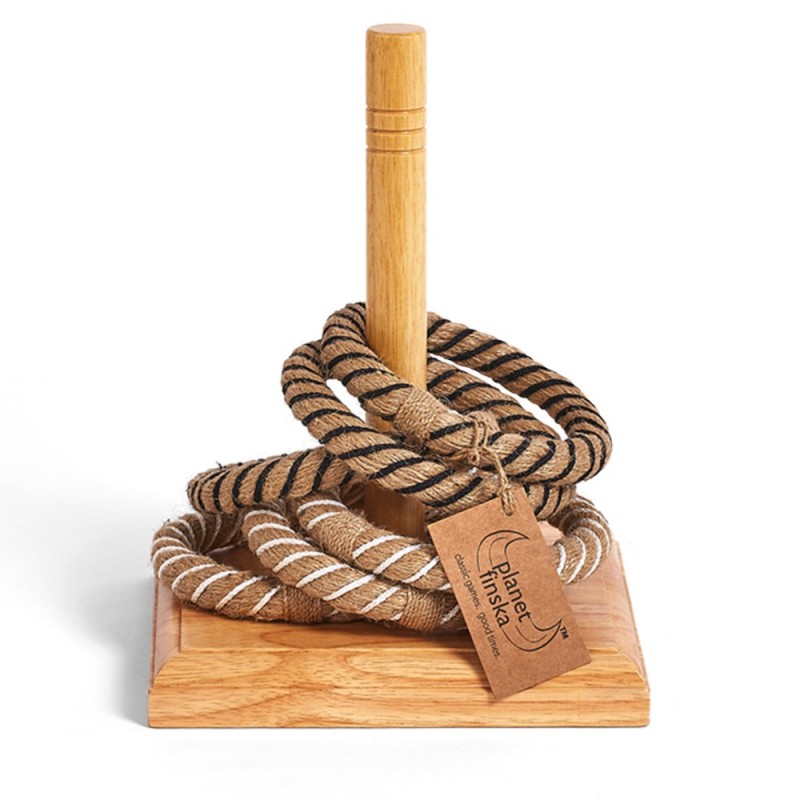 THEME: Two S’s are removed from the first letter of common two-word phrases, and wackiness is the result. 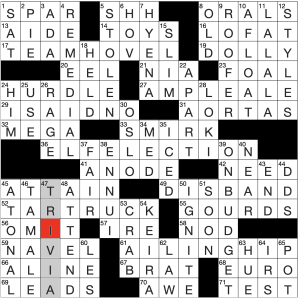 Nice little nudge in the title is all the instruction you need. Clever revealer, but I knew what was going to happen before I started the solve, which isn’t necessarily a bad thing.

I really like al the resulting phrases after the bases were modified. Many of the bases, however, didn’t feel like things I say/read/think about all that often. The only one that was solid for me was STAR STRUCK (but ironically, the resulting phrase, TAR TRUCK, was the least of my faves).

ELF ELECTION for the win, though. That’s a great visual.

Solid grid with not a lot of TRIVIA. I SAID NO! was fun.

I must, however, repeat a gripe about the types of clue that Universal frequently publishes that are either A+ or F and never anything in between. This time it’s [Name hidden in “macaroni and cheese”] NIA. If NIA had anything to do with macaroni and cheese, that would be a perfect clue. Otherwise, it just seems lazy. Nothing special. IAN is in there. So is RON. And there are literally hundreds of words/phrases where NIA is hidden, so why macaroni and cheese?

Not much else to say, though. Enjoyable, for sure.

Easy, breezy puzzle today that I think was a personal record for me! Tons of fun and delightful fill and cluing. I only wished that I had solved it sooner today so that all the wonderful Encanto ear worms would have been stuck in my head during work for an upbeat soundtrack to the day. 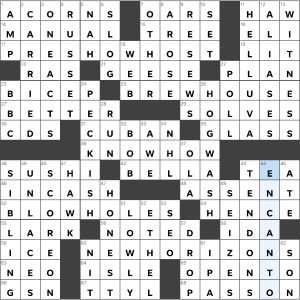 Theme: each themer contains the word “who”

Five themers today–what a treat! PRESHOWHOST started to fill in, after I tried “open…”, but I needed crossings for the end of it although the cluing does say “event” and not “show” or “act”. BREWHOUSE filled quickly for me as well as KNOWHOW which is short but sweet. BLOWHOLES took me half a second but also fell right into place and made me smile—fun fill! NEWHORIZONS needed a few crossings before filling in, though I will forever associate the phrase with the video game Animal Crossing.

Stumpers: PLAN (“rely” and “count” came to mind first), ASSENT (needed crossings), and LARK (could only think of “wren”)

Oh so good, Encanto is full of delightful music and is a movie worth seeing (and watching again and again) whether or not you have kids. Rather than link them all–though I want to!–here’s the one clued in today’s puzzle: “We Don’t Talk About Bruno”. Enjoy!