Title: “Six Characters in Search of a Pop Song”
Prompt: The meta for this puzzle is one of Rolling Stone’s “500 Greatest Songs of All Time.”
Answer: “Every Breath You Take” by the Police 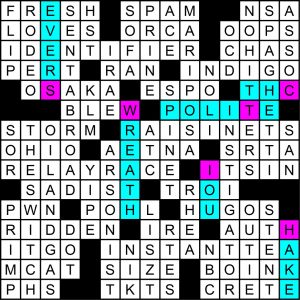 Just one overt hint in this one, at 1-D/33-D: [With 33-Down, replace something, metaphorically, and what literally to do to solve this puzzle’s meta] = FLIP THE SWITCH. Kind of a strange phrase which doesn’t ring idiomatically for me. You can “flip the script” where you give everybody a totally different way of looking at a situation, but what is “flipping the switch”? It doesn’t Google well in the sense given in the clue.

But moving right along: what could it mean? I looked for various things: parallel NO-HITTERS and SPAGHETTI have the ETTI string flipped between them, but that led nowhere. Nothing else jumped out, but I knew there had to be a lot going on since FLIP and THE SWITCH were both scrunched against the left side of the grid, indicating there were some serious constraints in the rest of the grid.

You knew it was tough, since Jangler got it in 30 minutes (!), then LL (another excellent meta-solver) 5 hours later, and then no one for the next 2 days! Pete decided to send out a hint on Thursday which read:

The letters S-W-I-T-C-H need to be changed in the grid in six places to make new words.

That opened the gates, as 176 solvers (which isn’t really that many) have now entered successfully with 30 minutes before deadline. As Pete instructed, I looked for entries that could change one of those six letters to form another entry. Easiest to start with the W since there are only two of them in the grid and one is used in THE SWITCH so unlikely to be used a second time. It was in WREATH at 29-D, which could become BREATH with one letter changed. That brought to mind the Police’s “Every Breath You Take,” which seemed highly likely to be on the Rolling Stone list. The rest fell quickly:

What happened to the T and the C? They are identifying the band at 27-A and 30-A, where THC and POLITE become THE POLICE.

So, this meta would not go onto my list of the Muller Music Meta’s Greatest Hits. Reasons being that 1) The solving mechanism is too random. You expect change-a-letter ideas like this to form words in both directions, but here they only work in one direction so they’re tougher to spot and less elegant. I assume it was impossible or Pete would’ve done it but it was a bit underwhelming as it stood.

Also 2) The order of the words in the grid is strange. EVERY BREATH YOU TAKE is in standard top-to-bottom, left-to-right order, but then THE POLICE is doing its own thing in the upper right. If you read them in standard order they’d be EVERY THE BREATH POLICE YOU TAKE. The key is to take the Down entries first to get the song title and then the two Acrosses to get the band’s name, but it was off-putting and seemed scattered.

And 3) I just don’t feel that FLIP THE SWITCH works to describe what’s going on here. You’re just changing those six letters, you’re not “flipping” them to my ear. I was looking for reversals and similar things in the grid that more accurately describe a flip.

3.50 stars from me. Interested in hearing what others thought about it.

Also my streak is still alive at least! See you back here next month for August’s puzzle.