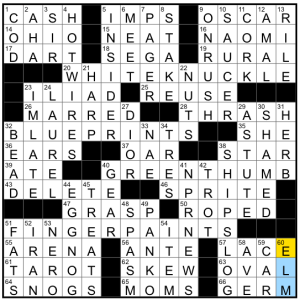 So, each theme answer comprises a color and part of the finger. Neat! I noticed the colors while solving but not the finger parts, at least until I came to the revealer. It’s very cool that such common phrases can be linked together like this; I love when crosswords show me new takes on everyday words and this puzzle does that well. I’m not sure what exactly the colors have to do with paint, but honestly I don’t mind it, the wordplay still comes through.

Maybe this is because I’m a crossword constructor, but my first thought when I opened the grid was “huh, that’s a weird black square pattern”. The extra black squares on the left and right sides of the puzzle are pretty rare to see – in my experience, they mostly crop up when working with theme answers of tricky lengths (like 14’s). These theme answers aren’t lengths that are too hard to work with, but they are a pretty well-defined set (in that none of them could really be switched out for another answer). Thus, I’m not surprised that it might take a strange configuration of squares to get optimal fill. I don’t love how this particular layout creates those 3×4 sections in the NW/SE corners though. Roy mentions in his construction notes that his original fill was quite different – I’d be interested to know if the black square layout was different too.

Fill lowlights: There are minimal lowlights here actually! Nothing too esoteric for a Monday (unless you are anti-UK-crossword-words like SNOGS or NAE). I basically had no resistance throughout this puzzle, except for trying to put down “trounce” instead of THRASH for [Defeat soundly] once I had the T.

Favorite clues: Despite its aggressive wordiness, 35a [Lead-in to “Bop” and “Wolf” in hits by Cyndi Lauper and Shakira] for SHE. Also 9a [Award won by Paul Newman and Gary Oldman] for OSCAR, whose wordplay I only got while writing this recap.

Congrats to Roy on a great debut!

Dave Rus makes his cruciverbial debut with a smooth grid all about trash. The revealer is TRASH TALK (37a, [Taunting words for opponents, and a hint to the starts of 17-, 22-, 56- and 62-Across]). The other theme answers are familiar phrases whose first words can also be synonyms for “trash.” 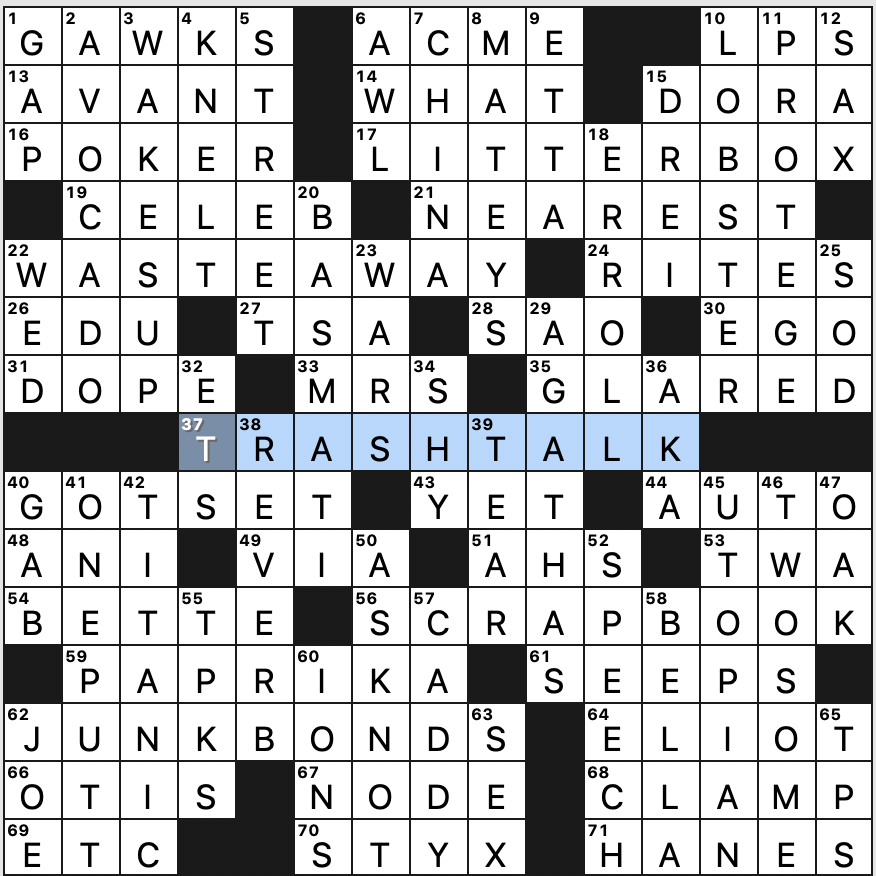 Nice. The meanings of the words change just enough to make the theme work. This felt like a perfect over-the-plate Monday-level theme.

The grid isn’t all that flashy, but there are plenty of 7s to enjoy: AVOCADO, LOBSTER, BASMATI, PAPRIKA (I’m getting hungry), PROTEGE, TITANIC, UTOPIAN, and AGATHAS (the awards). I’m not familiar with the phrase ONE-PUTT, but then I don’t follow golf. With the clue [Be efficient on the green], it seems obvious it means to sink the ball on your first putt once you’ve arrived on the green. Fair enough.

Looks like we have a debut in the house! 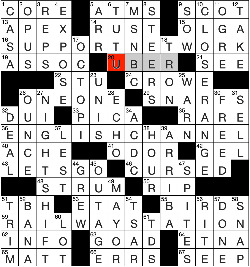 Something else you probably have in the house: a television. In this theme, we have three ways to watch TV shows: a NETWORK, a CHANNEL, and a STATION.

The punny cluing means there’s no need for a revealer, although I think it might be a little harder to parse the theme than an average Monday. I say “I think” because…crosswords have themes? That you know about before you’re done solving the puzzle? What?!

The grid is pretty clean although some of the clues I think lean toward a Tuesday-Wednesday level (for example, if you don’t have any crossings, [Big name in ridesharing] could lead you to LYFT or the correct answer, UBER, at 20A). I thought at first that this hadn’t affected my solving time, but now that I realize I was at a typical Monday time even though this grid is a slim 14 squares across, not 15, it probably did. 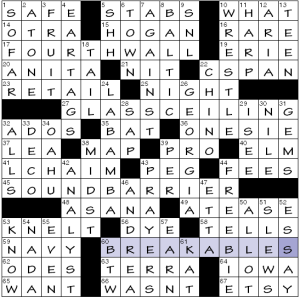 This was an exceptionally smooth crossword; it practically filled itself in. 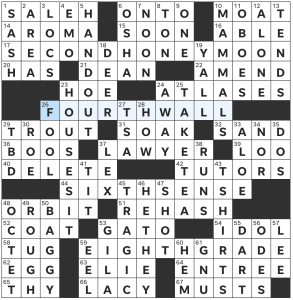 Good morning, friends! Here we have four answers that all start with an even ordinal. (I think that’s the word for this? Where it’s SECOND rather than “two.”) Anyway, we have SECOND HONEYMOON, FOURTH WALL, SIXTH SENSE, and then EIGHTH GRADE which doesn’t feel arbitrary because it is clued as a film title. (I haven’t seen it, but I did very recently watch Bo Burnham’s Netflix special and I went through a phase where I listened to “Welcome to the Internet” like twenty times a day (not an exaggeration) and considered moving to a remote island and never touching a screen again. Here it is, if you’re feeling a little existential.)

I liked MAMMALS and Y’ALL (the clue compares it to “yinz” which is specific to Pittsburgh, I believe) and HOUSE SIT. 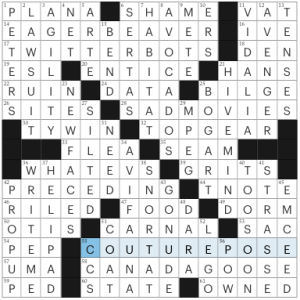 Tough one, as promised for the Monday slot. Lots of pop culture, which I like, sometimes with tricksy clues, which makes it fiendish.

Did not know: 55a. [Stance with one’s back hunched and arms akimbo, in fashion-speak], COUTURE POSE. To amuse yourself, do a Google image search of couture pose. It’s an unhealthy look!

Fave fill: EAGER BEAVER, TWITTER BOTS, “WHATEVS,” the TV show about fast cars called TOP GEAR ([Long-running show on which models are put to the test]), CANADA GOOSE, NEW FACES, HIVEMIND (would have preferred not to see “mindless” in the TWITTER BOTS clue) and BOGART clued as the [Hog] verb. 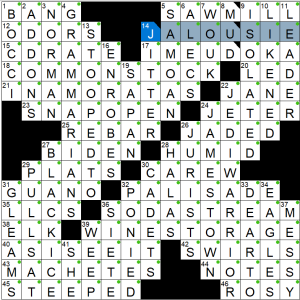 Will have to come back to flesh out the review. Fun puzzle with varying difficulty across the regions for me — the upper left was just the right amount of resistance I look for in a tough themeless, the bottom felt smooth but I would have liked a bit more pushback from the clues, I think, and then the upper right socked me in the face with that JALOUSIE / IME UDOKA pairing, with WOUK crossing. And not helped by ARM wrestling instead of MUD wrestling at 8D, of course. Or by a struggle to see COMMON STOCK, for that matter. I’m not a big NBA fan, but have enough general sports knowledge to vaguely know Mr. Udoka, and I just couldn’t pull the name.
This entry was posted in Daily Puzzles and tagged Brendan Emmett Quigley, Chase Dittrich, Dave Rus, Justin Daneau, Kameron Austin Collins, Roy Greim, Sara Cantor. Bookmark the permalink.