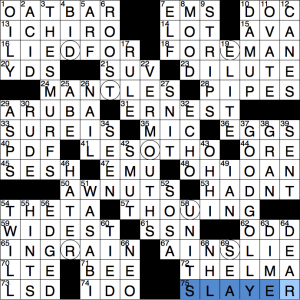 hello and welcome to episode #736 of matt gaffney’s weekly crossword contest, “Back to the Start”. for week 2 of guest constructor month at mgwcc, we have the duo of will pfadenhauer and malaika handa, who have both guested at mgwcc separately. as a dynamic duo, this week they challenged us to find things that often end up where they started. what are the theme answers? there are no long answers in the grid, but there are a few 9-letter downs and a bunch of 7-letter acrosses. the acrosses turned out to be the theme answers:

it took me a few glances to notice that LIED FOR and FOREMAN are right next to each other in the grid, as are INGRAIN and AINSLIE. from there, though, it was pretty quick to the next aha, which is that each of these seven-letter answers shares its initial trigram with the preceding themer and its final trigram with the following themer, in a chain that loops (as promised) back to the start: LIE (D) FOR (E) MAN (T) LES (O) THO (U) ING (R) AIN (S) LIE. taking the parenthetical middle letters in order gives DETOURS, which do in fact often end up back where they started.

this is a simple theme, but i can’t remember seeing anything quite like it before. i thought it was very elegantly executed, as each trigram changes quite a bit in meaning (and often pronunciation) in its two uses. on the other hand, i also found this considerably easier to see than the week 1 meta last week. i’ll be curious to see if the overall numbers are higher.

the grid took me a while to fill, as the cluing included a lot of things i don’t know, starting from 1-down: {Like one’s T-Zone, often} OILY. knowing the answer, i’m now a little bit afraid to look up what that means. i enjoyed the clues {Partner in crime?} for THELMA and {Drug that John Lennon insisted did not inspire “Lucy in the Sky With Diamonds”} for LSD. sure, john. we believe you.

this clue had nothing to do with the meta, despite being meta: {File type sent by MGWCC} PDF.

that’s all i’ve got this week. thanks for the puzzle, will and malaika!

This entry was posted in Contests and tagged Malaika Handa, Will Pfadenhauer. Bookmark the permalink.