Mike Shenk’s Wall Street Journal crossword, “When You Get the Chants…”—Jim P’s review

Theme: The mantra OM is added to various familiar phrases to wacky effect. 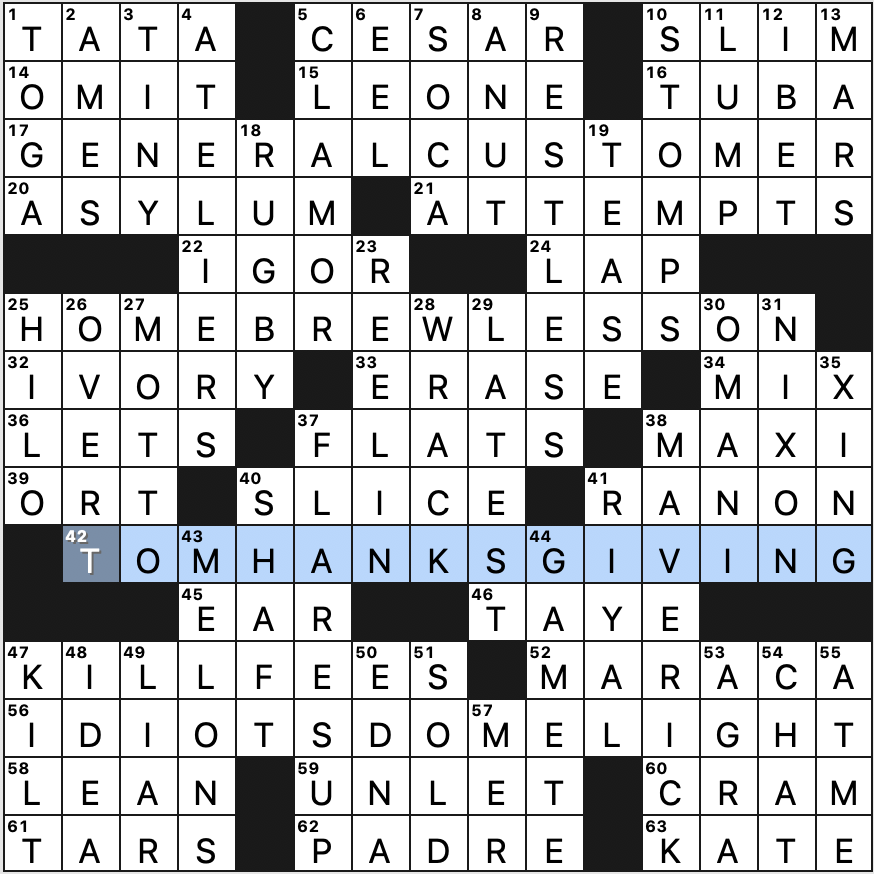 Hey! This theme seems familiar, because I did it myself back in 2018…in the WSJ no less. See Laura’s review here. And also, here’s a similar puzzle which appeared the very day before mine. I won’t say which of the three is best, but two of the three kept the pronunciation of OM the same (i.e. with a long O), and one of those two is “just funnier” than the other (not my words).

What else have we got? I like MAVERICK, FLARES UP, CLAMOR, and MARACA. I’m vaguely familiar with the term KILL FEES which are not payments to assassins, but payoffs to writers whose projects get cancelled through no fault of their own. I’m less familiar with the word ATELIERS [Art studios], but I’ve probably seen it before in a crossword. 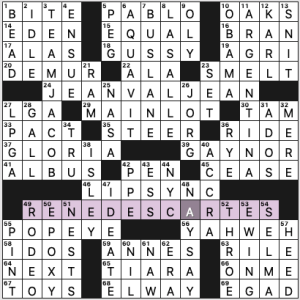 The theme in this puzzle with left/right symmetry is real and fictional speakers/writers of “I am”/”am I” quotes/lyrics:

Fave fill: GUSSY up, LIP SYNC, LA SALLE (Chicago has a major street named for this [French explorer of the Great Lakes]).

Most discordant note: The clue for ALAS, 17a. [“Ah, me!”]. I feel like this is an attempt by the editors to rationalize the use of AHME in grids! Who says this? Anyone? Bueller?

3.5 stars for me. I’m happy to see GLORIA GAYNOR in puzzles, but the theme would have felt better to me if she weren’t here with a little-known song in the clue. 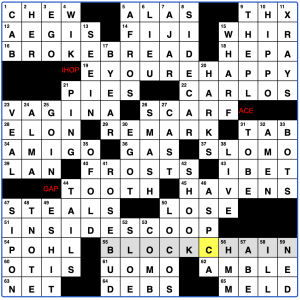 After last week’s diversion into diagramless solving, the AVCX Classic is back to a more standard style.  Aimee Lucido and Rafael Musa have collaborated on “Big Boxes”, and you may need to click on the image at right to see what’s going on in the squares clued by the revealer:

As hinted by the above, three of the black squares hold the name of a “chain” that helps the nearby across and down entries make some more sense:

Those chains would be IHOP, ACE Hardware, and the GAP.  Cute! 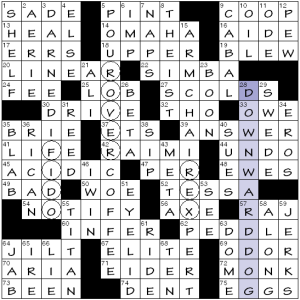 Along with Spot, these three are hoary, classic, almost generic dog names. As such, they are hardly ever used these days and it’s an act of ironic rebellion to name your pet so. Especially if it’s a cat. 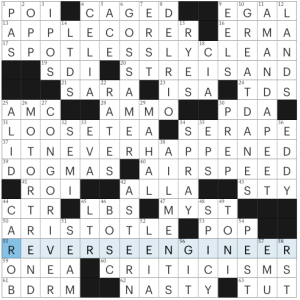 The word CRITICISMS is clued as [Remarks that are, ideally, constructive], so I’ll say that I’d have liked the puzzle better if it had fewer abbreviations, partials, foreign vocab, and other not-English-words. EGAL, SDI, IS A, TDS, PDA, ROI, ALLA, CTR, LBS, ONE-A, BDRM, A LID, IPOS, LTDS, LTR, CIA, EPS, and RST permeated the puzzle and gave a bit of a choppy vibe. 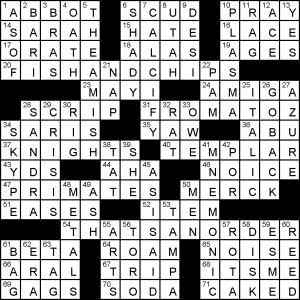 Alexander Liebeskind & Jeff Chen give us a kind of clue/answer reversal theme today, but a more whimsical one. The revealer is THATSANORDER and each of four answers (one split across two entries) is an example of a kind of order: food FISHANDCHIPS, sorting FROMATOZ, sect KNIGHTS/TEMPLAR, and taxonomic PRIMATES (one of the only ones that is the same in English, sidestepping the need to use say CHIROPTERA or CARNIVORA). Very creative themeplay!

I found it a very easy Wednesday puzzle, in part because of the boxy grid design, which meant lots of medium length entries that fell quickly. Not too many unusual entries, THEAMISH, gets a definite article thrown in. TORO clued as sushi also tripped me up, but there were crossers. ESME as a Twilight character might be new for some, but I feel it’s been around enough that it has showed up in a few puzzles.

From a personal point of view, [Pfizer rival], MERCK is amusing as the companies are called Zoetis and MSD in my world. The latter is my main vaccine supplier.

Editor:  Erik Agard
Theme: The last word of each theme answer is a thing that you can climb. 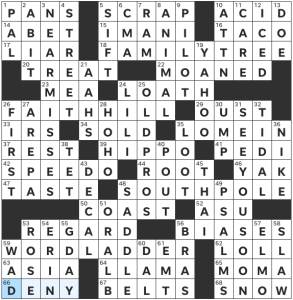 I call upon the spirit of Miley Cyrus to solve this puzzle:

I liked this one a lot! It’s a nice touch that none of the base phrases refer to the physical, climbable thing – they’re all metaphorical, at least to some extent. I loved “This Kiss” in middle school so FAITH HILL was a no-crosses gimme for me. I liked the clue for SOUTH POLE because it reminded me of that old riddle about “what color was the bear?” – do other folks know that one? And of course as a crossword solver/constructor I’ve done my fair share of WORD LADDER puzzles, so it felt appropriately meta to see that as an answer!