The revealer is “AIN’T THAT THE PITS?” (40a, [“Man, what a bummer!”…and a hint to four of this puzzle’s blocks]). The lone blocks in the four corners of the grid each represent the word PIT and are used as such to complete the neighboring entries. 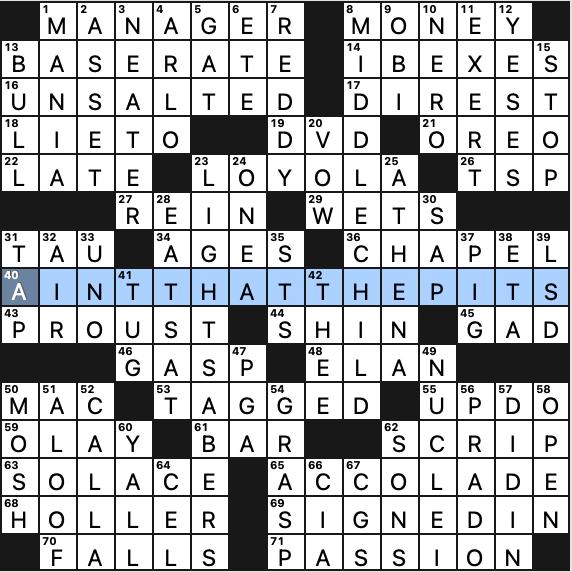 The corner PITs are used as follows.

This was fun to uncover and suss out. I definitely started with a few missteps before grokking the theme, but that added to the fun of the aha moment. Throw in some Thursday-level cluing and this proved to be a somewhat meaty challenge. Good times!

Some fun fill in the middle (away from the theme answers) in the form of MIDDLE CHILD and LIGHT SABERS. I also liked LOYOLA, PROUST, and ACCOLADE.

I don’t think I’ve ever seen CGS [Meas. syst. that includes the erg and the dyne] before in crosswords or IRL. Apparently, the initials stand for centimeter-gram-second, and the system is a variant of the metric system. Here’s hoping we don’t see it again in a puzzle anytime soon.

Last week’s themeless seemed a bit harder to me than the recent run of Fireball puzzles. This one seemed a bit easier. I solved on paper per Peter’s suggestion and I don’t think it was worth the ink to have the colored squares in the theme answers.

It’s Tour de France season. The “cycle” of the title is a bicycle. The red and blue squares contain the names of cities in France that (I presume) are part of the race. I know one for sure and I confirmed another. On my third Google attempt to find the other two, I decided I wasn’t that interested. That’s kind of how I feel about this puzzle.

Since I solved on paper, I’m giving you Peter’s grid. No one wants to read my handwriting (anyone who’s judged my papers at ACPT is nodding). Each city is embedded in a straightforward answer to a straightforward clue. The cities spin around the center. 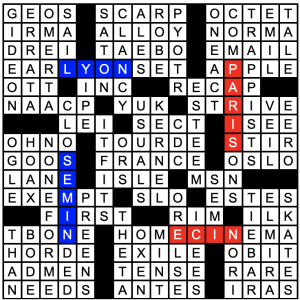 There you have it, unless I’m missing something. No wordplay. No tricks. Nothing much to figure out. Except for the color it feels like a Wednesday NYT. Oh, and it’s bigger than a standard daily puzzle. Still. I want more from the Fireball. 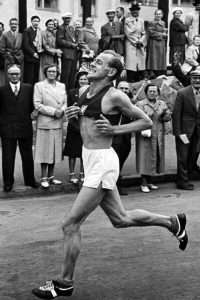 Zapotek winning the marathon in the 1952 Olypmics – the first time he ever ran a marathon.

That’s it. I’m just not interested enough to come up with more.

What I didn’t know before I did this puzzle: there are a lot of these, at least. I’d never heard of the IRMA Black Award for children’s literature. Children are the final judges – cool! I did not know that Mendelssohn wrote a famous OCTET at age 16. And I did not know that Seneca was EXILEd to Corsica. 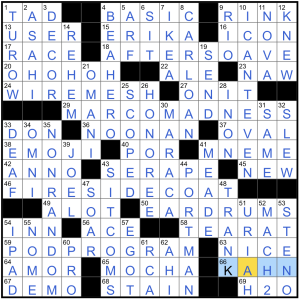 Today’s puzzle from Alan Arbesfeld feels a little more straightforward than the last few Thursdays have:

All of these phrases have been made wackier by changing their H to an O – AFTER SHAVE, MARCH MADNESS, FIRESIDE CHAT, and PHD PROGRAM all get this treatment.  Crosswords with one square getting a number are a weird pet peeve of mine, and the theme answers are…fine, so this one wasn’t my favorite.

44A: “Best Actress Oscar winner between Bullock and Streep” — that would be Natalie PORTMAN, for Black Swan 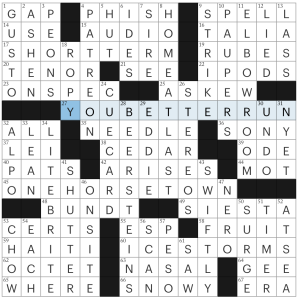 Good morning, besties! Are these Thursday puzzles getting easier, or am I getting better at puzzles? I zipped through this one, and “zipped” is not a verb I typically use on a Patrick Berry themeless. I liked ELBOW ROOM, PATREON, YOU BETTER RUN, and LITE BRITE (so many memories!!).

Nice to see a “Dreamgirls” callout– that movie is one of my all-time favorites.

This puzzle didn’t really have a lot of long answers– only eight of the entries were nine-letters or longer. Usually when a themeless puzzle has more mid-length fill (there were six seven-letter entries here), it will lean into tricky clues, but an easy themeless puzzle like this can’t really do that. 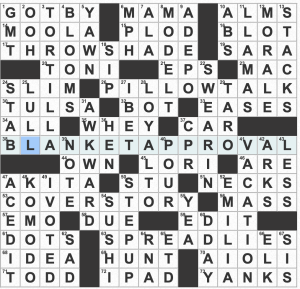 Fun theme. Enjoyed uncovering all of the themers. The only gimme for me was BLANKET APPROVAL, because Linus is synonymous with BLANKET in my mind. I like how each of the “bedhead” words becomes a noun, where they were adjectives/verbs in the base phrase.

PILLOW TALK seems to be a bit of an outlier as I’m pretty sure the definition of PILLOW doesn’t change from the base phrase to the altered phrase. In the others, the definition of the “bedhead” word completely changes. Also, the others all blankets of sorts. PILLOW is the only one of the group whose purpose is something completely different.

Found the fill trickier than normal for Universal, particularly in the MODEL T / ADEPO / EP area. I think the P is a dangerous cross in those last two, especially for newer solvers. Have never heard of the movie Happiness nor its director, TODD Solondz, but it looks like an interesting movie. I think I’ll seek that out tonight. Kinda want to watch it!

3.9 stars for me today. Thanks for this one! 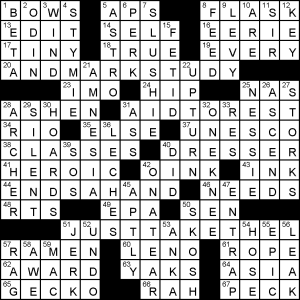 Today’s puzzle by Karen Lurie features letter subtraction, an L always from the opening letter of each phrase to be precise. I have never heard, nor I could I imagine a situation where I could, the phrase JUSTTAKETHEL, but it’s inferable I suppose. [*Research on the ampersand?], ANDMARKSTUDY is brilliant; and the other two function: [*Ambien, for one?], AIDTOREST; and [*Folds?], ENDSAHAND. It’s unusual to only do three examples in a theme like this, but if it means the rest of the puzzle is better, I’m for it.

Got a “huh? oh?” moment early on with [Perfect copy], EDIT. Perfect is a verb in this sentence. Sneaky! Other fun clues included [Unrealistically common affliction in soap operas], AMNESIA and [Lancelot or Mix-a-Lot], SIR even if the latter was a riff on the former. [Baby birds?], STORKS was another punchy misdirecting clue.

Lastly, I wonder how many of us started reading [Insurance spokeslizard], GECKO and put GEIKO in…

Brendan Emmett Quigley’s Crossword #1487, “Is This Your Card?”—Darby’s review

Theme: Each theme answer contains ACE as a rebus 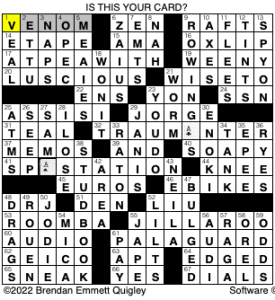 I love playing cards, so I was pretty pumped to see the title of this grid. BEQ recommended the paper version, and if I’d access to a printer, I’d have 100% done that, but the little aces in the applet are cute. I first filled in OUTER SPACE for SPACE STATION, which fit perfectly, but it quickly became apparent that it was incorrect. It wasn’t until I went back and figured out AT PEACE WITH that the rebus became apparent.

I really liked how open this grid was, and I felt like it flowed nicely, especially in the corners. Usually, since I’m a slow solver, it’s anybody’s guess where I’ll fill in first, but I was pretty top to bottom on this one.

Sorry for the late post, y’all. It has been a crazy day. See you tomorrow!