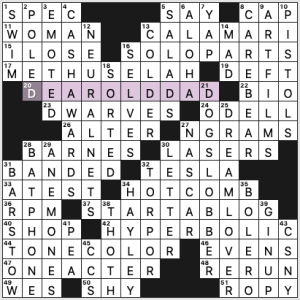 Either I’m in Kameron’s wheelhouse or this 62(!)-word puzzle is rather easy for a Saturday NYT.

Did not know: 44a. [Brightness or darkness, in musical terms], TONE COLOR. Pretty much everything I know about musical terminology, I learned from crosswords. Also had not seen 49a. [World Wide ___, nickname of an N.B.A. power broker], WES. Here’s his Wikipedia page. 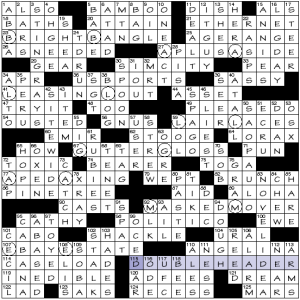 Sure, those entries are rather tortured, but they’re corralled into making sense, so mission accomplished.

The overall solve was congenial, without tough or rough spots to impede progress. 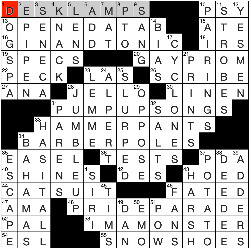 Some highlights from this moderately challenging themeless:

I will argue that although a GIN AND TONIC should be a [Simple cocktail], as clued, I can’t tell you how many times I’ve ordered one in a NYC bar and gotten a drink with flat tonic. I now drink them only at home (or at certain tapas bars; the Spanish know how to do these right) so that I can open a tiny can with just enough tonic for one drink instead of fuming about how a bar is charging me $15 for a lousy G&T. 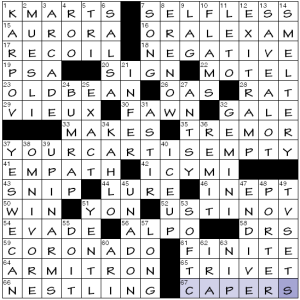 As advertised, a less rough offering. My solve was relatively smooth. Anytime I got stuck, there was always another spot where I could chip away just a bit more. So it took a number of iterations, revisiting the same clues with just a new letter or two to help things along. Precisely the way a challenging crossword is supposed to work.