Before we get into this puzzle, it should be worth noting that this is the constructor’s debut(!) in the New York Times, which is incredibly impressive, considering what we’re about to tackle. Congrats to the constructor!

Today’s Sunday NYT is a poker puzzle – from the puzzle’s flavor text: “A note on Texas hold’em: Players seek to combine one or more of the cards they hold with the cards laid out on the table to make the best possible five-card poker hand.” Ok, this thankfully gives away that we’re going to likely see some playing cards in the grid… and it turns out that there are a lot of entries related to those cards! I’m going to try and organize this as logically as I can: 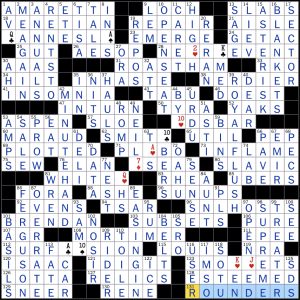 Ok, those are the pairs of cards that each of our four “players” has. Now, let’s see what five communal cards are at the center of the table (from left to right):

In Texas hold’em, you combine your two cards with the three most useful cards to you of the five on the table to make the best possible overall hand you can. (ETA: Thanks for the heads up – in this game, you combine up to two of your cards with as many of the central five cards as need be to make your best possible hand of five cards.) 39D lets us know which player had the best hand:
39D: ROYAL FLUSH – [123-Across’s holding that wins this puzzle’s game]

Player 4 indeed wins with the incredibly rare ROYAL FLUSH. Their King of Hearts and Jack of Hearts was able to combine with the Queen of Hearts, Ace of Hearts, and Ten of Hearts on the board to make a 10JQKA of Hearts – both the highest straight you can have, and all of the same suit. Congrats to Player 4, and kudos to the constructor for figuring out how to make this puzzle work!

Bonus entries:
42D: MINUTE HAND – [Indicator on a clock … or one of four in this puzzle?] – I’m not sure I get this one? Is it hinting at the small (minute) hands of two cards per player?
131D: ROUNDERS – [1998 Matt Damon film featuring this puzzle’s game]

This largely felt like a success, and I really appreciated that the app turned the rebus squares into their card symbols upon completion of the puzzle. (I hope folks didn’t get stuck trying to have the app recognize their input for those rebus squares!) My only slight gripe with the solving experience was that so much theme fill made for a few rougher sections (especially the NW corner for me). But still, an incredibly impressive feat of construction that hopefully didn’t frustrate solvers. To find four across entries that each held two cards + to be able to lay out the five cards in the middle of the puzzle + to be able to tell a full story of the hand in question is a triumph, indeed. And for this to be the constructor’s New York Times debut? Wow. (It’s also quite possible that this is his first ever published puzzle, as the Crossword Fiend database doesn’t show any other puzzles by him. If so, mind blown even more!)

Were you able to conquer this beast of a puzzle? Let us know what you enjoyed about it in the comments below.

Sadly, this grid isn’t about the genius behind “Word Crimes,” but it does insert the letters AL into familiar phrases to wacky effect. 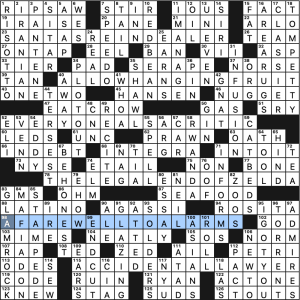 I liked most if not all of these, and I appreciate that they aren’t all easy insertions like the last one, requiring us to rethink and re-parse as needed. Well done.

Plenty of fun fill enjoy along the way as well, like RISOTTO, AREA RUGS, the late TOM PETTY, EAT CROW, “BE HONEST,” PLOT OUT, CAT BEDS, RWANDA, SEAFOOD, GLAM ROCK, MAFIA DON, and “I GOT YOU.” My sticking points were thinking that the musical was titled “Dear Evan HANSON” not “Dear Evan HANSEN,” which led me to IMANAGO for 11d [“It all gets done”]. The other one was not getting the F in MAFIA DON until late in the solve and having a hard time parsing MA_IADON for 84d [Hit maker?]. But I sorted them both out in the end.

THEME: Units of time can be found when the ends of the themers are taken together 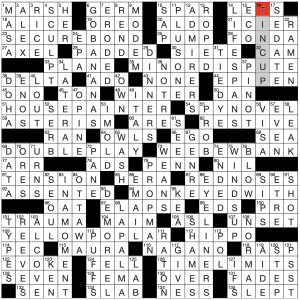 It’s not often you see a WaPo theme like this. It’s rather typical- more in line with what the rest of Crossworld publishes. I regularly solve the Universal puzzle, and I come across this theme type often. That’s not a bad thing. Just an observation. It’s rare that I solve an entire WaPo and don’t see or care what the connection is between the themers until I hit the revealer. Even then I finished solving, looked at the grid, and said “oh, I see it.”

Themers themselves are fine. I’ve never heard of WEEB EWBANK, but that means nothing. I would categorize my sports world knowledge as “staggeringly bad.” That said, WEEB is an interesting first name. I’m just picturing him getting in trouble and his parents yelling something to the effect of “Weeb! Get your ass down here immediately! Weeeeeb!” I don’t see how they could do that without laughing. ***Looks like his actual name was Wilbur. But still. Weeeeeeeb!

YELLOW POPLAR was new to me too, but inferable.

I don’t think that this will go down as one of the most memorable WaPo themes I’ve had the pleasure of solving, but I enjoyed nonetheless. Happy Sunday! 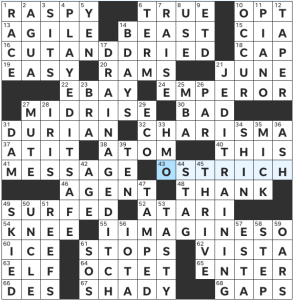 JEDI TRAINING was so exciting to fill in here, and I had no problem punching that it in immediately. PLAYED IT SAFE came through pretty quickly as well, especially once I got the stacking RASPY–AGILE–CUT AND DRIED–EASY top left corner. DRAINAGE DITCH took a little bit longer, but that was more due to my confusion over a double I in my once-partially filled in I IMAGINE SO.

This grid is asymmetric, and there’s so much interesting stuff in here. Between the Down theme answers and some of the longer fill like CUT AND DRIED and I IMAGINE SO. Everything flowed together really well, especially through the middle. I switched to focusing on Downs, and I cruised. 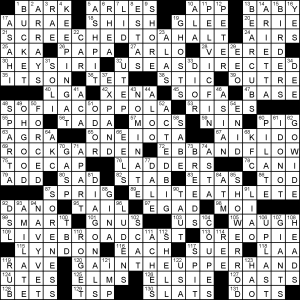 This puzzle by C.C. & Doug Burnikel features common names of individual stars spelt out across two words, and circled for convenience. We have: