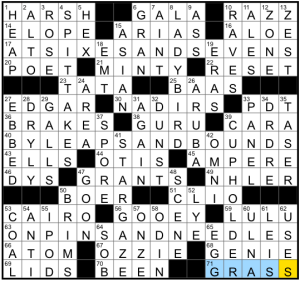 This is a hard theme to sum up in a single sentence. Each answer takes a common idiom and reparses it to be about a relevant location. Furthermore, each of the base idioms is structured the same way, and are an oversize-grid-spanning 16 letters long. Any layers I’m missing there?

Overall, I liked the theme, but in some ways it left me wanting a little bit more to tie everything together. Thinking of AT SIXES AND SEVENS in a math class context made me imagine learning the times tables (did other folks have to memorize those?) and everything going smoothly until you have to learn the 6’s and 7’s! I was less sure about the BY in BY LEAPS AND BOUNDS than any of the other articles in the idioms, but a post-solve google tells me that it is necessary for the idiom, so point to the puzzle, I guess.

Congrats to Phoebe on a great NYT debut!

I only just realized the title is a pun on “peace process.” But the theme is a vowel progression with words starting with P occurring at the end of well-known phrases. 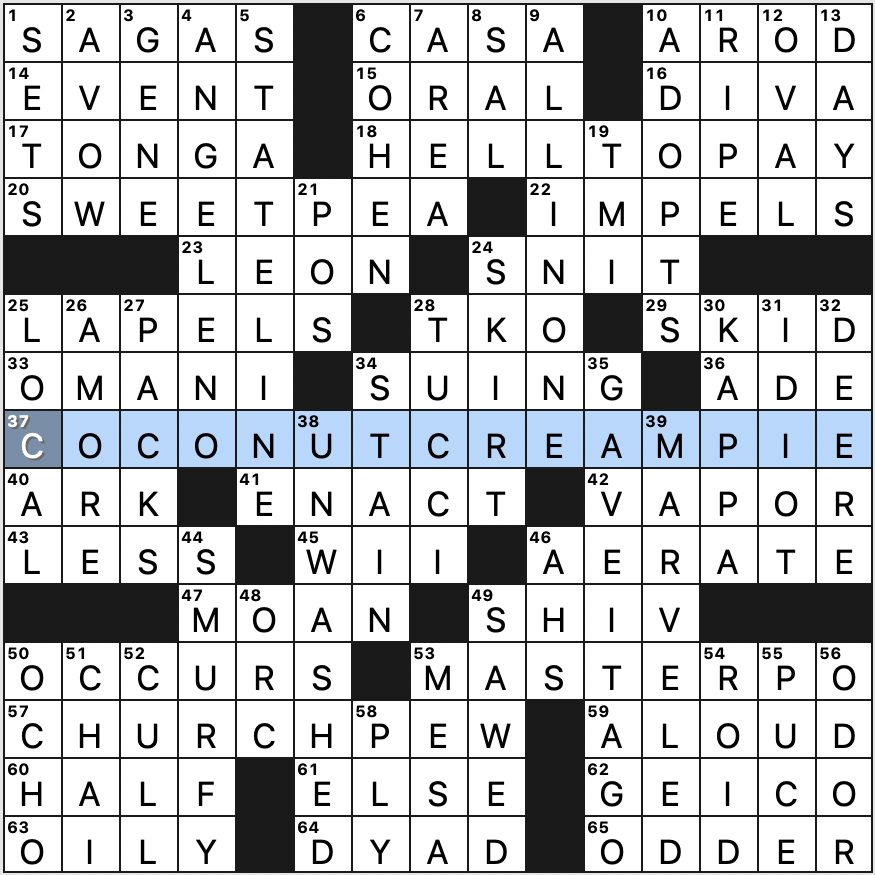 As vowel progressions go, this is very nice. I like the lively theme answers and the long U sound in the final entry. The theme probably couldn’t be done without MASTER PO, so that was a nice find, but I bet most of us needed the crossings for that one. (Was he really a “master” in that movie?)

In the fill, we have STATE LINE, GAVE IT A GO, ALL-IN-ONE, MARVELED, UNWASHED, and ANGELENO to sink our teeth into. This time I remembered that third vowel in ANGELENO is an E and not an I.

I also liked SMURFY [Unusually cheerful, like certain blue cartoon characters], but is that really the definition of that word? As I recall from the show, they’d use that word to replace many different adjectives.

Clue of note: 63a. [Like garage rags]. OILY. Make sure to treat and store those OILY rags properly, folks. Depending on the oil, spontaneous combustion is a real danger. 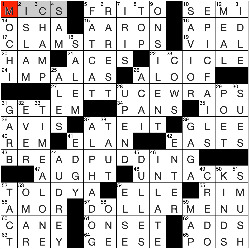 The crossworld has an awful lot of nice people in it, but one of the nicest is Howard Barkin, so I was delighted to see his byline today. Perhaps this puzzle is Howard’s way of telling the universe to send him some money, food, or both. The revealer at 57A [Budget option at a fast-food joint that the answers to the starred clues could all belong to?] is DOLLAR MENU, and the theme entries are all food items that start with words that are slang terms for money:

Quibble: A CLAM is slang for a dollar, whereas LETTUCE and BREAD are both terms for money in general. But finding a symmetrical theme set that is all foods has to have been tough, and the result is fun. The fill is super clean, leading to a sub-2-minute finish for me. Seems appropriate for a puzzle constructed by a fellow speed demon. 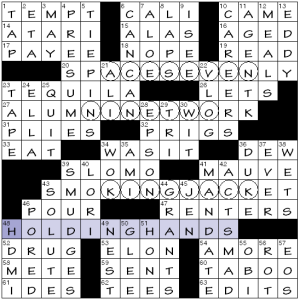 You’ll be excused for having a sense of déjà-vu, as this crossword replicates part of the mechanism seen in yesterday’s much-discussed (technically, anyway) New York Times 21×21 puzzle. From what I learned in the comments, there was a similar theme in Thursday’s BEQ crossword, so I’ve just consulted the Fiend write-up to see that it replicates the other major mechanism of the Times’.

Call it happenstance, call it co-occurrence, call it whatever you like. In any case, it shouldn’t diminish any of the three crosswords; they should each be judged on their own merits.

Back to the one at hand.

These are good finds, and it’s a solid theme. 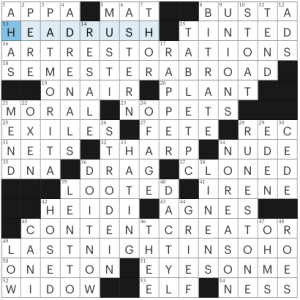 1a. [Dad, in Korean], APPA. Fair game these days since Korean TV and movies are so much more popular in the US now, and Parasite won the Best Picture Oscar.

Wouldn’t normally care for the duplication of “MUST I?” and “CAN I?” but the pairing strikes me as a cute echo here. Reluctance vs. eagerness. 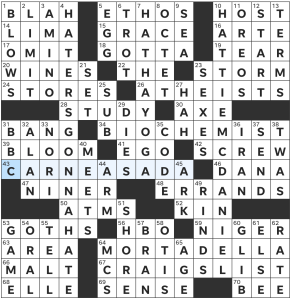 Today’s deeply asymmetrical puzzle features three vertical answers whose “top” is the letter string HAT. We’ve got HATERS GONNA HATE (the best answer, imo) along with HATHA YOGA (a new term for me) and HATTIE MCDANIEL, another new one for me. I know Walter White is from the show “Breaking Bad” (which I have never seen) but this clue is referencing a real-life Walter White.

An asymmetrical grid like this typically means we get lots of fun long answers because just because there’s a little stack on one side (like MORTADELLA / CRAIGS LIST), it doesn’t have to be on the other side as well. ATHEISTS, BIOCHEMIST, and CARNE ASADA were also fun. I had to guess on the crossing of DANA and MCDANIELS but it was a pretty educated guess. “McLaniels” and “McHaniels” sounded weird haha. 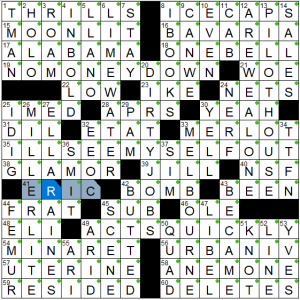 Open corners, a central spanner, and some other long stuff held together by a bit more 3- and 4-letter entries than we usually see on Mondays from BEQ. I’LL SEE MYSELF OUT clued to a failed Dad joke is spot-on, and the highlight of the puzzle for me. I also quite liked NO MONEY DOWN, ARE WE ALONE, and the trivia ins to ALABAMA and MILLER LITE (Helen Keller’s presence on the state quarter, and the motto “A Fine Pilsner Beer” on cans, respectively).

Ultimately, the higher count of short stuff helped piece together entries that would otherwise give me more resistance, like IKE, Richard Gere’s role in “Runaway Bride,” historian JILL Lepore and author PAM Muñoz Ryan. I did have some trouble with actress ELLA RAINES crossing ERIC Dolphy and the ELI Young Band, though that’s as much my fault for mis-entering EEOC as any particular difficulty in the grid. So it’s not necessarily my favorite balance of “puzzling difficulty” and “things I know” as themelesses go, but it’s nice to learn a bunch of new things without feeling like I was flailing to piece names together.