I finished the solve without an inkling as to the theme. I had to go back and looked at the starred clues’ answers then combine those with the title to make sense of it all.

The starred clues’ answers are entries that, when you add the letters ON, become the entries that appear precisely above them. Ergo… 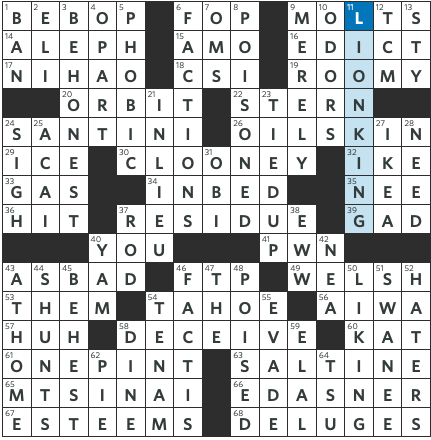 Pretty nice. I especially liked the stealth aspect of the theme. Having to figure it out led to a satisfying aha moment. That said, I don’t think I would have found the the theme without those asterisks, so…a perfect balance.

I also like the left-right symmetry employed here. I don’t see that it’s strictly necessary for the theme to work, but it made for a nice change of pace, and the fill was solid.

Speaking of which, highlights include George CLOONEY, MT SINAI, and a SALTINE cracker. I expect some solvers might complain about PWN [Trounce, to gamers]. As my 14-year-old said while looking over my shoulders, “How do you know what that is? I don’t even know what that is.” That shows you how dated the term is; no one uses it anymore.

Panorama of the beach as viewed from the ruins of Aberystwyth Castle, Wales

It took me a long time to figure out what was going on in this puzzle, and once I did I was delighted. This was fun to chew on and very satisfying to finally figure out.

Early on, I tried to fill in an answer that was too long and figured there must be a rebus or some other trickery afoot. I was right about the trickery even though I had that answer wrong. 15a [“I really appreciate it”] is not THANKS A LOT. It’s MEANS A LOT. Which fits perfectly, of course. I still had a bunch of big blank spots as I hopped around the grid trying to get a foothold (that’s foreshadowing there). The cluing is FB-tough on its own, which increased the challenge (not complaining!). I finally got down to the revealer, understood what I was looking for, and went back and figured out the theme answers. Phew.

The revealer is 56a [Seeds with larvae inside….and what three answers in the puzzle contain?]: JUMPING BEANS. I knew I was looking for three beans somewhere, and I’d gotten enough of the SW to see what was happening at 48a. The clue is [School with revolving doors?] and I had DIPLOMAL which should DIPLOMA MILL. I found the missing LIMA going up. Peter’s grid shows all three “beans” more clearly than mine. 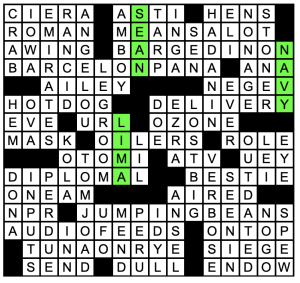 I loved this theme. It doesn’t bother me that we have two actual beans (vegetables? legumes?) and one person. I liked the struggle and the reward of this puzzle.

What I didn’t know before I did this puzzle: never heard the word NONAGE, which is clued as [Minor span?] and which Google tells me means “immaturity or youth.” OK, if you say so.

Editor:  Amanda Rafkin
Theme: Each theme answer starts with a word meaning “to fashion” (as in “create”). 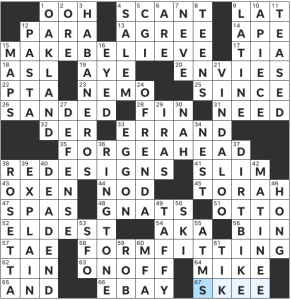 Great title to go with the theme! The theme answers are solid if not *spectacular* – I like them all, but none of them made me say “OOH” or anything. Where this puzzle shines is in the rest of the grid. It’s super asymmetric, which allows for a bunch of strong answers since the constructors don’t have to worry about finding a match for them – it’s a bit of a tradeoff that comes with moving away from a conventional grid. And this puzzle certainly delivers on great answers: OFRENDA, DIRTBIKE, RINGTONE, LATINE, HABANEROS, I could go on. It was great fun to solve this and be constantly surprised and delighted by words I uncovered all the way through, not just at the theme answers.

Theme: Each theme answer includes a pounding noise within the first word(s) that, when removed, would repeat the word. 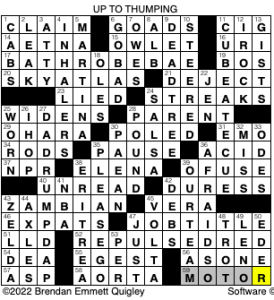 Revealer: 26d [“What the first part of each each theme answer packs on vis-à-vis the second”] POUND

I had no idea about this theme for a bit, but that was more because I was thinking about pounds in terms of weight. It didn’t help that 8d [“Liturgical vestment”] ALB with its LB crosses BATHROBE BAE, so I spent too much time searching for hidden pounds in all of the wrong places. Eventually, however, it came to me that each one added its own throbbing noise within it. DAD RUMP DAP is definitely one of the oddest answers I have ever seen, so points to BEQ on that one.

This puzzle was symmetric, and I liked that we got both Across and Down theme answers. It also flowed pretty nicely. I first cracked the upper left corner thanks to my random knowledge of country music with 5d [“Country singer Martina”] MCBRIDE and that nice use of 4d [“Tool for asthmatics”] INHALERS. I also liked the inclusion of two quoted clues in 35d [“‘Don’t let the door hit your ass on the way out”] PLEASE GO and 36d [“‘Hate to say it’”] AFRAID SO. They made for a nice one-two punch power clue.

Overall, such a fun puzzle! Needless to say, the theme will be pounding in my head for a while.

Elizabeth Leonard and Carly Schuna’s Universal Crossword, “Your Average Puzzle… or is it?” — Jim Q’s write-up

I don’t know how to approach anything about NORMAL, ILLINOIS without that earworm taking control.

If you don’t care to listen, then please know that Ben Folds also found the name of the town Normal, Illinois a bit strange after he passed “Effington” (I assume that the place he is actually referring to is Effingham). I’ve toured Illinois rather extensively, which in and of itself is strange I realize. I wonder if Normal, Illinois is in normal vernacular?  I have no way of knowing.

THEME: Phrases that start with a synonym for “yada yada yada” are reimagined wackily. 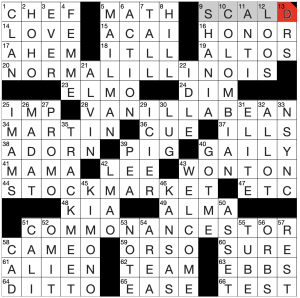 Congrats on what I think is a debut from Elizabeth Leonard!

COMMON ANCESTOR is the other one I’m not sure is so heavily pinned in our daily vernacular. Feels like there should be a bunch of phrases that should work with COMMON _ _ _ _ _ _ _ _ but perhaps ancestor was the catchiest?

Enjoyed overall! I read the puzzle title first, which I often forget to do, and it lent an air of mystique to the puzzle.

I don’t have a lot else to say. I mean… fill was fine, but dare I say NORMAL, VANILLA.. etc?

Nothing to dislike here. A solid 3 stars. Looking forward to more from Elizabeth! 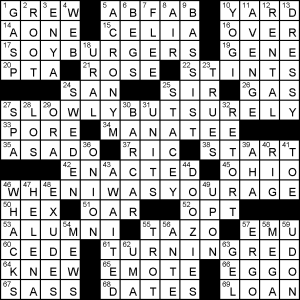 TURNINGRED is a beautiful movie that explored Chinese-Canadian culture and aspects of female adolescence, specifically menstruation, that despite being part of reality for half of all tweens, are typically still taboo subjects. It could be a coincidence, but the lead character, Mei, has almost the same name as one half of the constructing team of Erica Hsiung Wojcik & May Huang. The rest of the puzzle is three entries, though two span the grid: RUST is found in [Little by little], SLOWLYBUTSURELY and [Opening for some nostalgic stories], WHENIWASYOURAGE conceals WINE. I prefer to use “when I was a young warthog”, but both entries are great choices! The final choice is RUBY in [Some plant-based patties], SOYBURGERS.