.PUZ UPDATE: Alas, the server that hosts the puzzle files you can access via Fiend’s “Today’s Puzzles” links (for the Wall Street Journal, Universal, and Jonesin’ crosswords) will be down through the end of July. The crossword community is grateful to Martin for the work and expense he puts into running that server. Meantime, you can use Crossword Scraper to “scrape” data into .puz or .jpz format from a crossword’s web page. Here’s where you can download Scraper for the Chrome or Firefox browser, and here’s more information about using Scraper.

As time goes on, I seem to be less and less enamored of tortured titles requiring awkward re-parsing as a basis for a puzzle. In this case, the title should be read as “Primary W In.” That is, the letter W is inserted at the primary position (the beginning of the entry) in familiar phrases to make new wacky sayings. 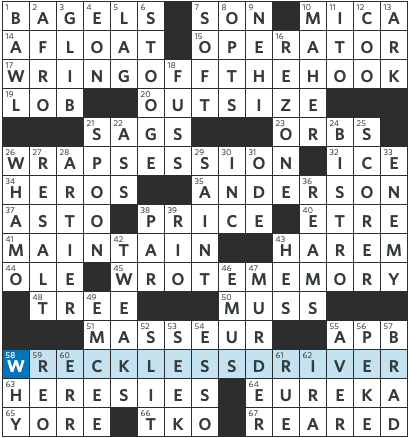 I don’t mind an added-letter theme, and these are fine (especially that last one). It’s just the title that I’m soured on.

The fill is solid enough though not especially sparkly. All the longest entries are in the Across direction, which is quite uncommon. We have ANDERSON Cooper, MASSEUR, WHAM-O, “EUREKA!,” and a MURDER of crows as highlights. At the other end we have old standbys I TO and ETRE, and the wince-worthy entries HAREM and RESALT. 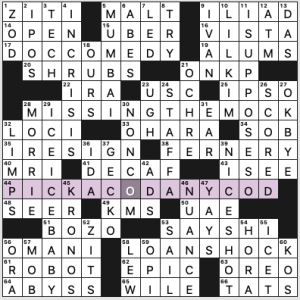 It wasn’t till I got down to PICK A COD, ANY COD  (pick a card, any card) that I grasped the Boston-accent angle of the theme and was able to piece together the end of MISSING THE MOCK (missing the mark). So we have:

I like the variations of place in the clues—all in the Boston area, all different.

Trouble spot: Where 25a. [___ jure (by the law itself: Lat.)], IPSO crosses the contrivance “OK, BYE” (27d. [“Well, see you later then!”]), which in turn crosses the uncommon word FERNERY (38a. [Part of a botanical garden]). There’s also the Latin phrase ipse dixit, so it might have been better to stick with IPSO facto here. I tried NURSERY for the botanical garden and wondered if HERBERY might be a thing. 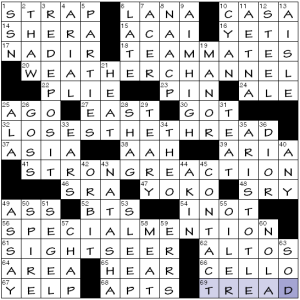 Each of the theme answers is couched in a description of the Slack app, which I’ve never used. All you need to know, however, is that it’s a messaging/communication platform.

I’m never a fan of brand-heavy themes, so am holding this one at arm’s length. With the exception of channel, these are generic digital communication terms, and I suspect that channel is found in more than a few apps—but I am supposing Slack is the most prominent or recognizable of them. 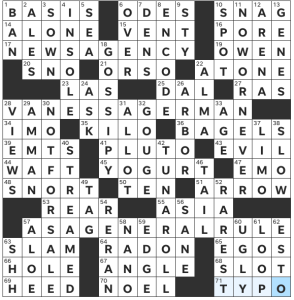 Well, I finished this puzzle in a little over three minutes, and then spent the next two hunting for an error, which ironically ended up being “este/type” instead of ESTO/TYPO. Good to know the universe has a sense of humor this morning.

Loved the title of the crossword! It took me a little bit to find the theme of this puzzle – I at first thought it might have something to do with theme answers starting with GE, even though NEWS AGENCY didn’t fit that rule. VANESSA GERMAN was new to me, and Google tells me that she’s an “American sculptor, painter, writer, activist, performer, and poet”. A very impressive resume and I’m happy to learn her name! (The “power figures” in the clue immediately made me think of action figures, which is, uh, not what she does). She’s by far the most interesting theme answer – NEWS AGENCY and AS A GENERAL RULE are fine, but neither one stands out to me. 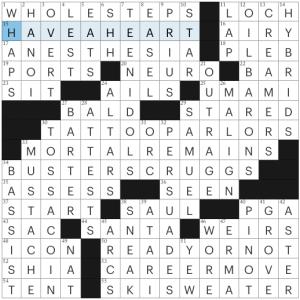 Pretty easy for a themeless, even with 1-Across being musical terminology that slowed me down.

Here I am dashing in a bit late. This whole working thing really screws up your day, doesn’t it? Not used to it anymore. And when I finally found time to solve this puzzle, I had absolutely no idea what was going on. There are numbers in each theme clue. The title had me wondering if it had something to do with computers and binary code, but the numbers aren’t all 1s and 0s. 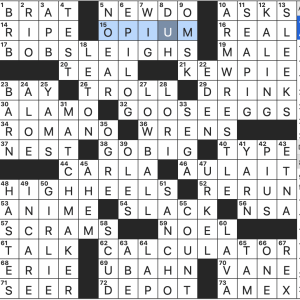 Luckily, there’s a revealer at 62a [Device one might turn upside down to decode the starred clues (or to enter their answers)] is a CALCULATOR. Ohhhh. Back in the day, we had handheld calculators, and some of the numbers look like letters if you turn them upside down. Letters, of course, can make words. Since we don’t have a calculator in the house, I turned to the internet and quickly found out that 57738 = bells. Maybe SLEIGHS was supposed to evoke “Jingle Bells” since Olympic bobsleds don’t have bells. 53704 = holes. This doesn’t quite work for me. Holes and zeros aren’t the same thing. 53405 = shoes and that one works!

This is a good idea for a theme that suffered somewhat in the execution, at least for me. And even the idea relies on knowledge of an obsolete piece of equipment. Well, it should be obsolete, although as recently as 2018 my daughter’s high school required specific TI calculators for math classes and would not allow them to use their phones. Anyway.

Since this writeup is already late, I’ll skip to what I didn’t know before I did this puzzle. I had no idea that most pecorino ROMANO cheese is now made in Sardinia. I also didn’t know that Myanmar is second only to Afghanistan in OPIUM production. 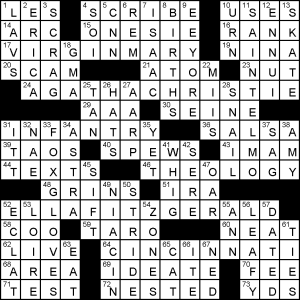 I like the concept of Dan Caprera’s puzzle theme. Each of a number of people or things are the “Queen of X” and clued as such. However, I can see several clues/answers in the collection being problematic though. So: