Oh, hey! The Saturday NYT puzzle is by John Lieb, the co-director of this Sunday’s five-hour Boswords crossword tournament. You can attend in person if Boston is doable, or compete online (like me). Here’s the registration page. I always enjoy the Boswords Twitch stream, with constructor interviews, droll videos, and a fast-moving chat thread. The puzzles, edited by Brad Wilber, are sure to be terrific. 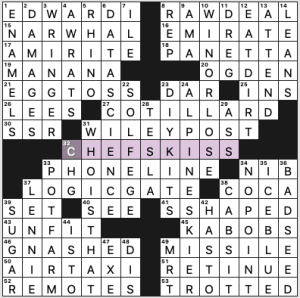 I enjoyed the puzzle but was surprised to solve it in a distinctly Fridayish amount of time. And that was despite assigning a scientific name to the UNICORN rather than recognizing that [Monodon monoceros, more familiarly] would be its water twin, the NARWHAL.

Fave fill: “AMIRITE?” (nice echo with nearby EMIRATE), which I have been known to use. Marion COTILLARD. A chef’s kiss *mwah* to CHEF’S KISS. I always like GNASHED; the gn- and kn- and pn- words are fun. Being put through the WRINGER, working at a POT FARM. DATA SCIENCE, an increasingly popular field of study. Lots of nice phrases—WIN OR LOSE, there’s NO POINT if an ALPINE SKIER ends up having to EAT DIRT. An ICE BLUE glacier is cool, too.

I have sometimes disdained crosswords whose corners are jammed with 7s, because too often those 7s turn out to be lifeless roll-your-own words or obscurities. With his stair-stepped 9s in the midsection, John manages to get six 9s and two 11s into the mix, and the 7s did not disappoint.

Didn’t really know anything about the LOGIC GATE, 37a. [Circuit building block]. The term is maybe faintly familiar.

4.25 stars for this smooth creation. 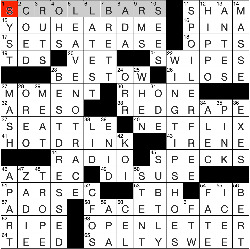 [Ersatz] as a clue for SHAM reminded me of one of my favorite bits of German trivia: The word “Muckefuck” is a slang term for ersatz coffee. You’re welcome. 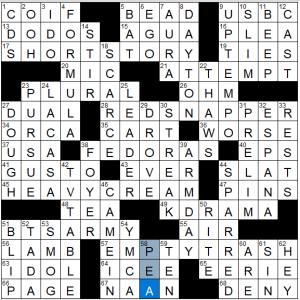 Our themers all start (on the left-hand side, as that’s where things start in English text:

Partway through the puzzle I thought the connecting word was simply “hand” — the only “Red Hand” I know is the Red Hand of Ulster, and I felt “Empty Hand” was even weaker. But of course, RED HANDED and EMPTY HANDED are much more familiar. It occurs to me I’ve never seen a live RED SNAPPER, but yep, upon a Google, they’re just as vibrant in the water and freshly caught as they are on a dinner plate with rice and plantains.

This was a fun grid to move around in, with more connectivity out of the corners — see those 7-letter entries in columns 4 and 12, and a more meaty middle than I feel I’m used to in higher-word count grids. TV TABLE, DAYTON (apparently the “Gem City” — sorry to my friend Sara that I didn’t know that!), ARM DAY (I don’t hear this as much as “leg day,” but presumably “not leg day” has to be something), and UPTEMPO are all highlights for me.

I often highlight entries I first learned from crosswords. Usually they’re something I learned from puzzles years ago as a teenager, entries from before my lifetime that I remember because I still rarely see them outside of puzzles. KDRAMA [49a Show such as “Weightlifting Fairy Kim Bok-joo, e.g.] is decidedly not that, and I only learned the term in the last year, from either a USA Today or Brooke Husic puzzle, despite having known of “K-Pop” for much longer. It’s nice to learn things. 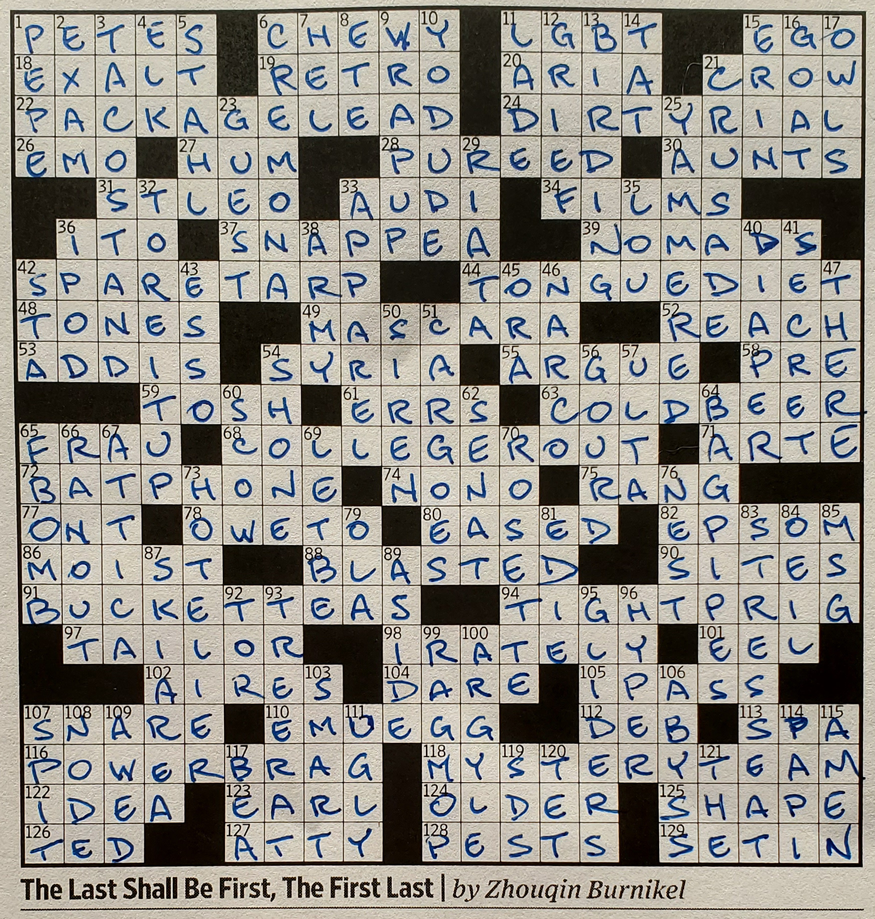 Thanks to the WSJ’s poor interface, I ended up solving the crossword on paper, with the intention of transcribing (transtyping?) the solution back onto the screen version. Unfortunately, there was no way that I could discern to make the entire grid visible all at once, so you’re stuck with my sloppy hand-solve.

Needless to say, I’m a little miffed after the—okay, I’ll generously call it an ordeal.

For this theme, we have two-word phrases whose second word is four letters long, and that second word has its first and last letters transposed to wacky effect. 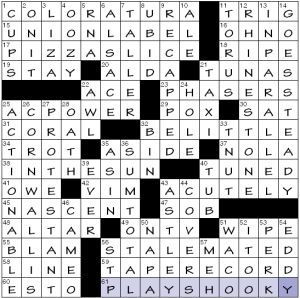 This one was a beast. Really had to chip and chip and chip away at it. So many tentative fills and corrections, but there were enough lucky stabs to start weaving things together.

But jeez the cluing was tough! Some I couldn’t make sense of until after the answer was in and some were just cruelly oblique.

The grid features triple-stacked 10s in each corner, so that’s a lot of density composed of intimidating entries!

Did I mention the cluing was tough? Like, gratuitously so, even by Stumper standards? Anyway, it’s over now. How’d you make out?