First of all, congrats to the newly married couple who authored this puzzle! This is the first byline for Jessie Trudeau, though you’ve certainly seen a few puzzles from her before this as Jessie Bullock (so I’ll tag this puzzle by both of her names). Extra congrats to Jessie, who also recently completed her PhD at Harvard to become Dr. Jessie! Wow. Wish all the absolute best to both of today’s constructors! Now, let’s tackle their puzzle, which has us wondering where we might be going… 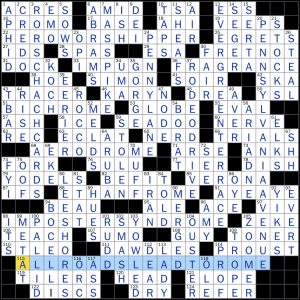 – 13D: EVERGREEN TERRACE [Home of the Simpson and Flanders households] leads to 98A: IMPOSTER SYNDROME [Habitual fear of being exposed as a fraud]

– 20D: PENNSYLVANIA AVENUE [One side of D.C.’s Federal Triangle] leads to 115A: ALL ROADS LEAD TO ROME [Aphorism that’s visually depicted five times in this puzzle’s grid]

I’ll admit that I had to visit the puzzle’s write up at xwordinfo.com because I couldn’t figure out the full theme myself. I saw the five instances of -ROME in the thematic acrosses of the puzzle, but couldn’t figure out how ALL ROADS LEAD TO ROME. I was overthinking things!  It turns out that each across -ROME entry has an intersecting down entry which is a literal road… and it ends at (leads to) -ROME. Neat!

I think this only could have been pulled off by expert constructors who saw the merits of using diagonal (instead of rotational) symmetry. What I also appreciated about this puzzle was how clean it felt and how fun many of the clues came across – for me, it was a joyful solve, even if I wasn’t keen enough to figure out the theme! Hilariously and possibly relatedly, I had no problem plunking in IMPOSTER SYNDROME instantly and with no crossings. Read into that about me what you will. :)

Random note: 1D APHID [Rosebud ravager] – Let me tell you how much I blushed at reading this clue! How did that make it through the editing process?  Or is this just a crossword clue version of RORSCHACH CARDS for me? 0:)

That’s all for now. Congrats again to the wonderful couple! What did you enjoy about their puzzle? Let us know (and send them your best wishes, too) in the comments below.

Theme: Synonyms for “happiness” are spread out across pairs of entries. 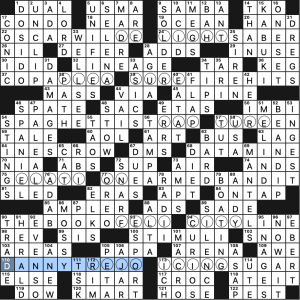 Putting entries together to spell out words doesn’t do a whole lot for my wordplay itch, but these are fun entries, and I enjoyed their length and variety. Notably, OSCAR WILDE and LIGHT SABER make for a good combo. 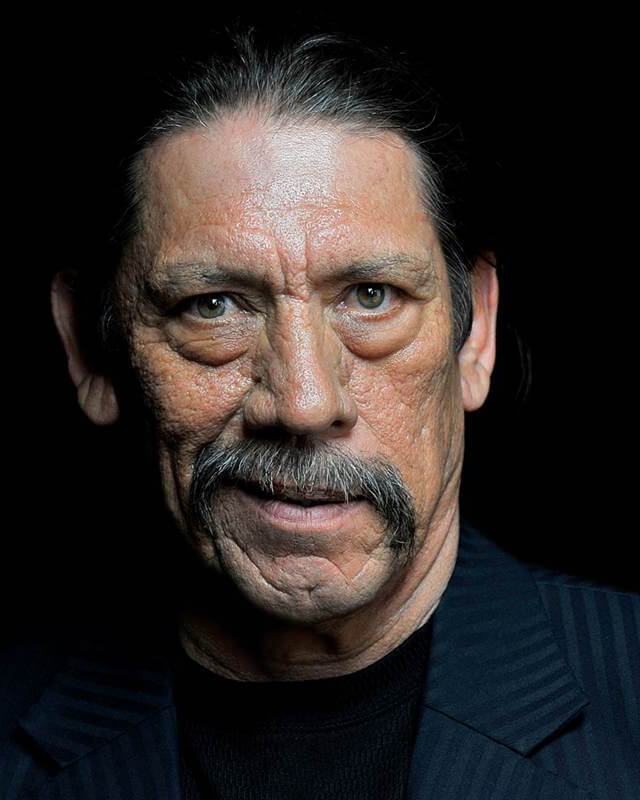 I especially enjoyed seeing DANNY TREJO in the grid. His story, from drug dealer, armed robber, and convict to leading man, author, and restaurateur is fascinating and compelling. He generally plays a badass in all his films (that’s because he is one; the scars on his face are from various fights and boxing matches while in prison), but I’ll remember him for his tour of his Animal Crossing island in the early days of the pandemic.

Not a whole lot of sparkle in the fill, probably due to the fact that we have six grid-spanning theme rows, but it’s solid nonetheless. Likes: KABUKI, “WE’LL SEE,” MELINDA French Gates (though I had never seen her referenced with her maiden name in there; maybe it’s new since the divorce?), BEAN DIP, PALE ALE, DATA MINE, and a cocker SPANIEL. Questionable: AMPLER? Can something really be more sufficient than something else?

Today’s puzzle is a repeat of a very memorable puzzle that Evan first published in 2019. Even then it had a lot of meaning (in addition to its multi-tiered construction).

Now it has even more meaning. It originally paid homage to where Evan had grown up, in Highland Park, Illinois. That locale, of course, is where the recent July 4 mass shooting took place. Today, it is being published again to honor the victims.

You can read Evan’s take on the puzzle here. It is worth the read.

The following is my write-up that I posted on the original day it was published in January of 2019:

This week’s WaPo comes with a note from Evan: My parents moved out of the house in Highland Park, Illinois, where I grew up. I wrote this puzzle while visiting that house for the last time.

This personal touch is very… touching… for this multi-layered puzzle. And it’s a super cool tribute with which many of us can relate.

Also, I’m a sucker for a well-crafted Schrödinger puzzle, so this one had me at hello. Or “goodbye” I s’pose is more appropriate. 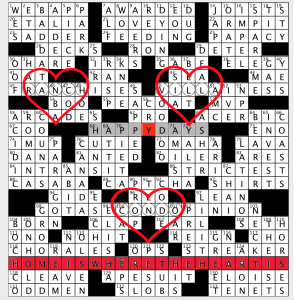 THEME: Each of the three Across entries containing circled letters contains a type of house, yet the letters H-E-A-R-T can be substituted for the down answers in those circled letters and still make sense.

REVEALER: I was able to figure out this answer without reading the clue (I was worried that the clue would be too revealing). I felt something cool was happening and I didn’t want a spoiler. For once, I was glad I did that, because the AHA was more satisfying IMO.

First Set: This was the last area of the puzzle I solved, and while it helped me to figure out the theme, it was the spot that caused the most confusion.

Circled Squares + Left-Right Symmetry + *Only Four Theme Answers = There’s something about this puzzle that is tricky. *There’s a helluva lot more than four theme answers…

Even as I solved the starred downs, I innately went with the answers that fit the clues for the houses. It’s only when I (lastly) tackled the first set of starred down answers that I realized there was something funky going on. Then, with the revealer in mind, I figured it out. My favorite kind of puzzle… when the revealer helps me to figure out the rest. Although I found the bulk of this easy to solve, there was a tension building as I didn’t realize the theme, and that pesky area that I couldn’t grasp.

I love Schrödinger puzzles. And there’s always going to be some give in the clues in order to make it work. Most of the answers here fit great either way. I loved DEAR/DEAL, COD/ROD, OAR/TAR, CAT/HAT.

It felt as if the clue for BAD DATA /BAD DATE was doing acrobatics in order to fit, and I’m still unsure if I understand the clue for HOE / TOE. [*Something in the end of a shoe]? I’m ready to say that HOE is the end of the actual word SHOE, but I’m also prepared for someone to mock my ignorance and tell me that the actual tool called a “hoe” has a part called a “shoe.” But if my initial instinct is correct, it feels like a ? at the end of the clue would’ve been appropriate.

Overall, this was really a fantastic puzzle. I loved it. I’m an occasional constructor, and I rarely talk about it in real life. But people inevitably find out, and I get these sorts of comments: “So I hear you make word searches…” “My biology teacher makes crosswords too for homework assignments!” “I know a website that can help you with that!”

In other words, the human element is lost on people. Or at least casual solvers.

I loved the note that accompanied this week’s puzzle. For once (really, for once), the embedded note wasn’t about how to figure out a trick. It was about a human experience.

And it was a puzzle made by a human.

And while I’m still unsure what DECKS has to do with [Diamond settings?], I know that I have wasabi and hot chicken wing flavored Oreos in my pantry ready for a drunken dare because a human mentioned their existence in a crossword puzzle. 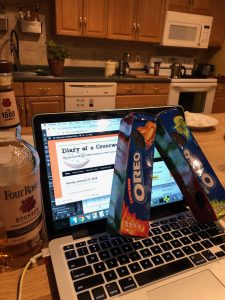 The shipment of the Oreos from Asia took 3 months. The plant by my sink I grew from a cutting in 3 weeks. And the Four Roses Bourbon was gone in 3 days (kidding on that last one… had to continue with the 3 motif… it was at least 5 days).

Zhouqin Burnikel’s USA Today crossword, “In It Together” —Darby’s write-up

Theme: Each theme answer contains IN IT. 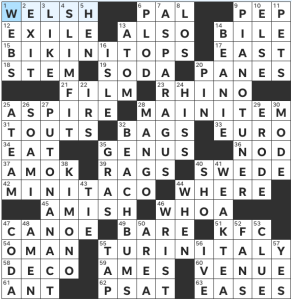 Zhouqin Burnikel’s USA Today crossword, “In It Together” solution for 7/24/2022

MINI TACOs are so cute, and I definitely would like to eat more of them, so I was excited to see them appear within this puzzle. I have not seen an agenda with an explicitly stated MAIN ITEM, but it felt logical and relatively easy to fill in, especially with the M from 28d [“Fruit paired with sticky rice”] MANGO. TURIN ITALY was also relatively easy to figure out, even if one isn’t familiar with the Holy Shroud.

I loved that this puzzle started with 1a [“Language in which ‘please’ is ‘os gwelwch yn dda’”]. I switched to the Down clues so fast, but I was almost as quick to switch back once I realized that this consonant-heavy language was WELSH. It set such a good tone for the rest of my solve. Also, it was fun to see 27d [“Pretend”] PUT ON AN ACT and the hilarious 9d [“Person who might bring a fork to work”] PIANO TUNER. I truly scratched my head thinking about how to concisely fill in “someone who brings their lunch” before I caught the IAN through BILE – EAST – PANES that made me immediately realize I was barking down the path. 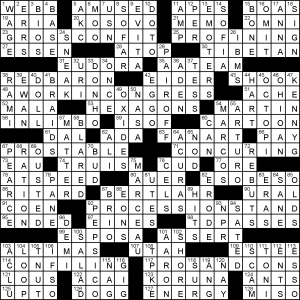 If you didn’t work out what was happening by the end, [Both sides of an argument, and what have been switched to create the answers to the starred clues], PROSANDCONS should have explained it. “Wacky” answers today are formed by swapping PRO and CON in a variety of words and phrases. Thus:

Five best of the rest: