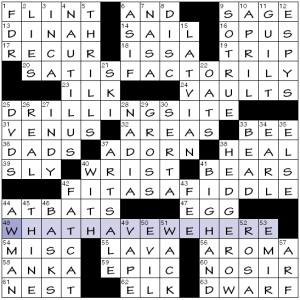 Since I hadn’t read the title beforehand, the small twist of the revealer genuinely surprised me. I’d expected a fourth [Well] clue, but instead it compiled the other three.

That turns a kind of humdrum theme into something a lot more exciting. 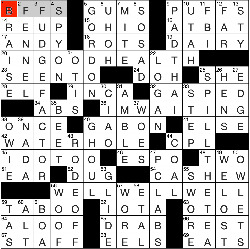 56A [“What have we here?” … and 20-, 36-, and 42-Across] is WELL, WELL, WELL. And indeed, what have we here? Theme entries at the locations referenced in the revealer that can be used as definitions for WELL, each in a different sense of the word. Get it?

The revealer really elevates the theme here — this could have been just a puzzle with the theme in the clues, in which the same clue is used for multiple theme entries, but instead the themers all got different clues and all is revealed in the end. And the grid is super clean, with a couple of longer entries (FUDGE FACTOR and SPILL THE TEA) that I’ll forgive for being longer than two of the themers because they’re fun.

Theme: Together, all of the theme answers go through all of the vowel sounds, with PR beginning of their respective last words. 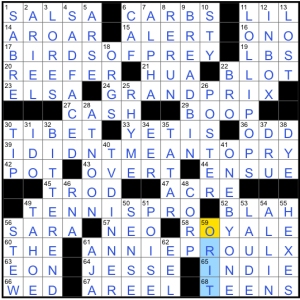 Five themers on a Monday! And one in AEIOU order! I loved that I DIDN’T MEAN TO PRY spanned the grid here. BIRDS OF PREY and ANNIE PROULX were also really fun to see. I thought that this was a great Monday theme, not too difficult with a very FEE-FI-FO-FUM vibe when all pronounced aloud together.

Additionally, the fill itself was really smooth. From 1a [“Dip for tortilla chips”] SALSA, it was easy to move throughout the puzzle. Of course, I’m always excited to see a reference to 1d [“Buffalo hockey player”] SABRE (or Buffalo anything). I stumbled for a second over 9d [“Place to store a loaf”] BREAD BIN because I had BREAD BOX. However, YETIS and I DIDN’T MEAN TO PRY quickly made me realize my mistake. The other place that I struggled was near 61a [“1977 Steely Dan album with a palindromic title”] ANA crossing 64a [“__ Ventura, former governor of Minnesota”] JESSE. However, the J is apparent enough in a first name that it was a tough but fair sort of crossing.

Also – this looks like Michael T. Buerke’s debut! Congratulations on a lovely and fun puzzle!

Four stars for me on this Monday!

Theme: Familiar phrases are bookended by synonyms of “vault” or “spring” (where both of those are verbs). The revealer is SPRING BREAK (64a, [Collegians’ getaway time, and a hint to this puzzle’s circles]). 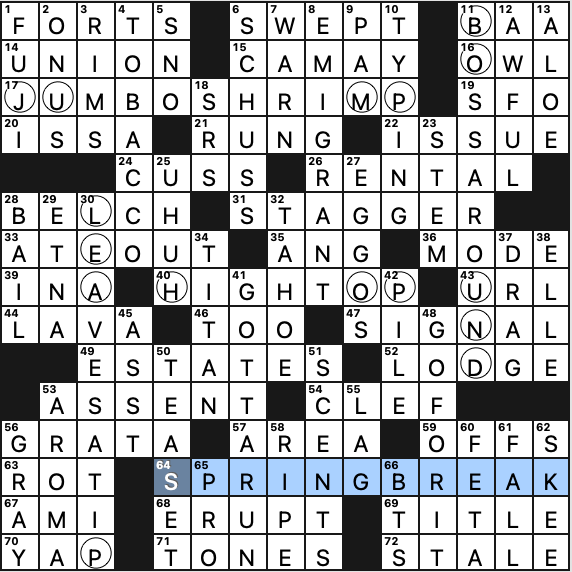 That JUMBO SHRIMP phrase sure does a lot of extra duty, doesn’t it? It’s oxymoronic, hides “jump” on the outside, and “bosh” (twaddle or nonsense, to a Brit) on the inside. Thanks for that phrase, universe!

Zhouqin seems to always include fun, colloquial phrases in her grids. Today we get “GOTTA RUN” and “GO FOR IT!” I also like SCHUSS and TOBACCO (for its Scrabbly B and double-C). Elsewhere, that CUSS / BELCH / STAGGER triangle made me LOL. 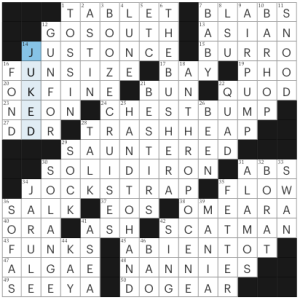 Another enjoyable themeless from Natan, a 66-worder. Nice flow throughout the grid.

Didn’t really know JUKED, [Faked out, on the gridiron]. Tried DEKED, which is ice hockey’s “faked out.” Really slowed me down in seeing JUST ONCE and FUN-SIZE.

Hello everyone! I got to see quite a few crossword friends at Boswords yesterday. So much love to the Boswords team for the event, and their continuous, year-round events. They make it seem pretty effortless!

Today we’ve got a puzzle with three theme answers, SUN SALUTATIONS, MOON LANDING, and RISING ACTION. The title (“early”) indicates that the first word is the connection. This sounds like an astrology theme and I know very, very little about astrology. I believe each person has a SUN sign, a MOON sign, and a RISING sign… however I do not know what these are. Someone smarter than me will explain in the comments, I am sure.July 25

Deeply, aggressively asymmetrical grid here, which allowed for some fun entires like NONBINARY and LIL NAS X. I’ve been on a Megan kick lately, so I was just listening to “DOLLA SIGN SLIME” this morning. 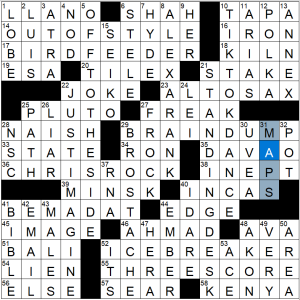