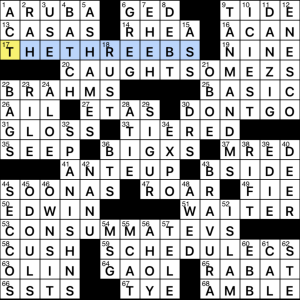 Hello, my lovelies! This week’s theme involves the letters of the QWERTY keyboard’s bottom row.

The revealer is SPARE CHANGE (59a, [Source of some jingling, and a hint to the starts of 17-, 28- and 45-Across]). Those other theme answers are familiar phrases whose first words are “changes” to (i.e. anagrams of) the word SPARE. 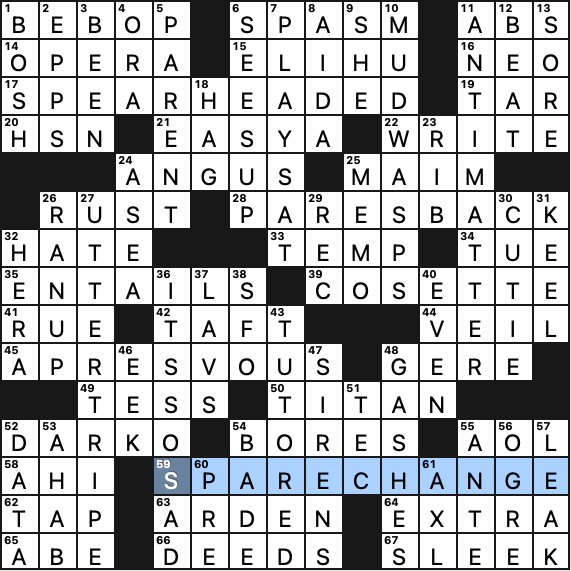 Straightforward enough, assuming you know a little French. Another good grid for a newbie, along with yesterday’s. Maybe this was more suited for a Monday as well?

Fun stuff with MUD WASPS, ANTI-MATTER, “IT’S SO SAD,” COSETTE, and UTTER TRIPE. I only know ELIHU Yale from crosswords, so maybe he belongs later in the week. 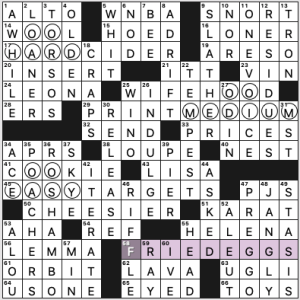 The theme is the sort of eggs I cannot abide, FRIED EGGS. It’s both a taste and texture thing; I just don’t like egg whites or egg yolks. Scrambled, though, that’s fine! The revealer clue is 58a. [Breakfast order visually suggested three times in this puzzle’s grid], and the three long themers begin with HARD, MEDIUM, and EASY, as in the ways you might order eggs “over.” There’s a circled double O (two eggs) above each of those doneness words, so you get “eggs over hard,” “eggs over medium,” and “eggs over easy.”

The eggy OO words are WOOL, the very weird WIFEHOOD (is that in The Handmaid’s Tale?), and a tasty COOKIE. 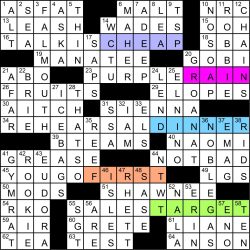 Hello there, everyone! Again, here is hoping that you are doing well and beating the heat at the moment. If you come across someone sweating buckets from their forehead while running around trying to go to one assignment to another, that’s probably me!

I solved the grid without looking at the title, and was a little confused as to what was going on with the theme answers, or if there was a theme at all. Looking at the title put it all in perspective, as the last word in each them entry is also a word that can come before the word “date.”

There were definitely some tricky spots in the grid, most notably with figuring out all of the abbreviations, from NRC (10A: [Atomic energy org.]) to SBA (18A: [Govt. loan agcy.]) to SSA (31D: [Fed. benefits provider ]), to WCTU, though that last entry did allow me to look up Hatchet Granny for the first time in ages after seeing her mentioned in the clue (14D: [Carry Nation’s org.]). Anyone here ever used ICE BAGS in the past for hangovers (27D: [Cold applications for hangovers])? I mean, I haven’t had a hangover in a very long time, and even when I did, all I really did for it was lay in bed until it went away. Then, after it went away, continue to stay in bed! All those home remedies and such for curing hangovers I never thought of trying. Maybe I missed out. Seeing ROOKIE immediately made me think of the clue that I want to use if I ever have that in a crossword: [Type of mistake, perhaps] (42D: [League newbie]). Hopefully I avoided a rookie mistake in this entry before going to the next graph!

“Sports will make you smarter” moment of the day: RHETT (47D: [Butler of literature]) – The emergence of the University of Florida becoming a college football powerhouse was ushered in when alum and former Heisman Trophy winner Steve Spurrier was hired as head coach of the Gators in 1990. One of his first star players was a running back named Errict Rhett, who led the Gators in rushing in each of his four seasons in Gainesville, earning All-SEC First Team honors in 1991 and 1993. Rhett went on to the NFL after being drafted in the second round by the Tampa Bay Buccaneers, and he rushed for over 1,000 yards in each of his first two years as a Buc despite the team being terrible. The 1995 season was his best NFL season, rushing for 11 touchdowns while amassing 1,207 rushing yards. 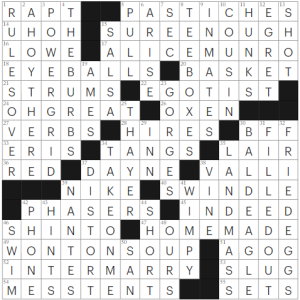 Not much resistance from this one. The few times I met an impasse, it was but a short delay as a nearby detour was always accessible. Never had to abandon a section as I piloted through the grid.

This was a well-integrated, smooth-flowing grid. Intersecting long entries comprised meaty blocks in all four swaths of the puzzle.

Very much appreciate that solid title! This also appears to be a debut puzzle, so congrats, Wayne Harris :)

THEME: Surnames of famous brothers can be found in common phrases 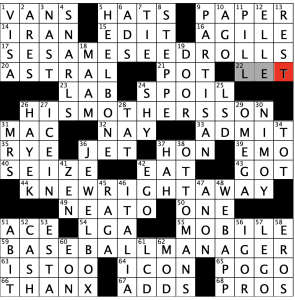 A solid hidden word theme here (albeit obnoxiously presented due to Universal’s inability to update its software, so there are no circles as per the industry standard in a puzzle like this, and hence the visual element is lost and many novice solvers are likely to be confused by the very strange “count letter numbers” directions in the theme clues).

My favorite of the set was BASEBALL MANAGER. How neat to find ALLMAN in that! That is also the most solid of the base phrases imo. SESAME SEED ROLLS seems a bit wordy… I think I just call them SESAME ROLLS or BUNS. HIS MOTHER’S SON sort of feels like a partial to me without “He is” in front of the phrase. It just doesn’t feel like a stand-alone at all to me.

Fill felt pretty standard, though I did laugh out loud at JEWEL BOX clued as [CD holder]. I have never heard it called that. We always called them JEWEL CASES. And notice the past tense? We don’t call them anything anymore. But there is a lot of strain in that oddly Scrabbly area. Much of the fill has to run through multiple themers, so with everything else being relatively clean, we’ll forgive the JEWEL BOX:)

Nice finds with all those names, for sure.

Personal best today with this super fun puzzle with a great theme and themer set! 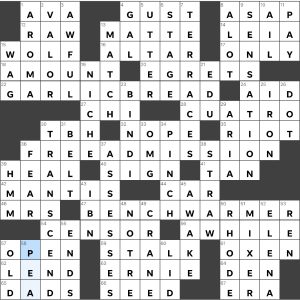 Theme: the word “press” can be combined with the first half of each themer to create a new phrase

Once I had the first themer, which filled in quickly, today’s theme jumped out at me right away. To make tasty homemade GARLICBREAD, a GARLIC Press certain speeds up the process. FREEADMISSION took me a few crossings to get second half of it but the first part was clearly FREE Press. Shout out to BENCHWARMER, getting time as an entry today, which gives us the final theme answer of BENCH Press.

Stumpers: MATTE (thought along the lines of “liquid” or “powder”), RIOT (needed crossings), and PINCH (had all but second letter with crossings so “punch” was my initial thought for a dough)

What a great puzzle, with a delightful theme and wonderful fill throughout! I was on the same wave-length today, with (what is for me) a fast time for a personal best. The clues and entries set me up spectacularly. The gird itself, looking at it more now, has a great design that I really enjoyed. Super smooth fill and great flow for me today. Did others get a personal best too?