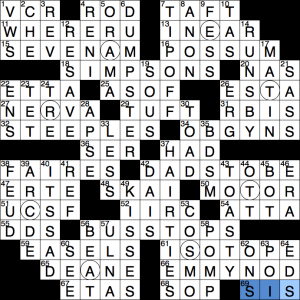 hello and welcome to episode #738 of matt gaffney’s weekly crossword contest, “All Over The Map”. for week 4 of guest constructor month at mgwcc, we have a puzzle from brooke husic, who challenges us to find “what I used for my road trip around the country”. all right. what are the theme answers? well, i don’t know. there are no long answers in the grid; there are a handful of 8s and that’s it. nothing is marked with a * or otherwise overtly thematic. maybe the only clue that ties into a road trip theme is {Silas ___ Highway (Connecticut route named after an American revolutionary)} DEANE, which could’ve just been clued for the person and not the highway. i guess {Pick-up places} BUS STOPS maybe also, though probably “road trip” implies use of one’s own vehicle rather than riding a bus.

i had the singular experience of solving this puzzle (though not the meta, which i have yet to crack) while seated next to brooke husic in the judges’ room at boswords, where i had just met brooke in person for the first time. she’s as delightful in person as you would expect based on both her puzzles and her co-hosting at podcasts like crossnerds and tournaments like lollapuzzoola. but it didn’t make solving the meta any easier, as i remain quite stuck. let’s go over some notable features of the grid.

first of all, the lack of long answers (and the plethora of short and medium-length answers) in the 78-word grid leads me to suspect that there are a whole bunch of theme answers, maybe on the order of ten. we just have to figure out what they are.

there are a lot of one- and two-letter “words” in the entries: WHERE R U, IN-EAR, SEVEN AM, AS OF, OB-GYNS, DADS-TO-BE, ARC DE… well, okay, maybe not that many. but enough to catch my eye. the title and instructions certainly suggest a map of the united states, and the state postal abbreviations are fertile ground for a meta, but other than IN(diana) and DE(laware), the two-letter fragments in the answers aren’t state abbreviations. i suppose the “over” in the title might suggest looking in the grid square above some particularly noteworthy set of letters, but i don’t know which letters those might be.

overall, there are a lot of acronyms/abbreviations. i definitely don’t know what to make of that, other than it probably suggests a highly constrained grid. there are also, it must be noted, many S’s in the grid: 29 total, which is more than you’d expect for a 15×15 puzzle; none of the other letter counts seem anomalously high or low.

okay, i might as well try combining two of the ideas i’ve already mentioned, which is state postal abbreviations and looking at the letters right above those. that would at least be a plausible mechanism and it could lead to a grid this constrained without any particularly long answers required.

the problem is i already don’t know what to do with IN-EAR, which contains IN and NE overlapping plus AR later on with a black square over the R. hmm.

okay, this is definitely something: all eight of the 5-letter entries in the grid, including IN-EAR, begin and end with state postal abbreviations:

i suspect we need to do something with the middle letter in each of these. circling them in the grid and reading them off in order gives, uh, EATRTCSA, which is nothing. on the other hand, i can see that it anagrams to STATE CAR, which does seem like an extremely apt answer for this meta. let’s see if we can work out the correct ordering mechanism.

each of the state abbreviations used in the theme appears twice except for CO and VA. can we chain them together? yes we can: CO S MO T OR A MA T IN E AR C DE A NE R VA. so the road trip starts in colorado and ends in virginia, and does indeed make use of brooke’s STATE CAR. it’s, uh, not the most logical route geographically! colorado -> missouri -> oregon -> massachusetts -> indiana -> arkansas -> delaware -> nebraska -> virginia. but some road trips are all about the journey, right?

this is an unusual meta, i think. much (perhaps most) of the difficulty comes from just trying to figure out where the theme lives; once you find it, the mechanism is pretty straightforward for a week 4. i don’t know if there’s any hint anywhere in the puzzle to suggest looking at five-letter entries; if there is, i missed it. i did take note of the staircase formations of helper squares in the northeast and southwest corners of the grid, but my main takeaway from those was that those corners were probably very constrained by theme material, rather than the blocks being necessary to make certain entries exactly five letters long.

one thing i’m just now noticing is that literally no other entry in the grid (besides the eight themers) contains any two-letter state abbreviation as a substring. that’s … actually, that’s quite staggering, and supremely elegant. that elevates this meta to five stars for me—it means that any solver who goes looking for state abbreviations will of necessity find exactly the right subset of theme answers to look at. that was certainly my experience: i went looking for state abbreviations, stopped and stared at IN-EAR for a while because that was the first entry i found that contained any, and then i was on my way. that’s really quite a magnificent touch by the constructor.

recognizing that constraint preemptively answers what would have been my next question, which is why the fill is relatively less sparkly than one might expect from such a talented and meticulous constructor; if the only thematic constraint had been “put eight specific five-letter words into this grid in any order”, i’m sure we would have seen some better fill. but the inability to use any state abbreviations anywhere else constrains the fill mightily. if i had to guess, i’d wager that somewhere around a third of all the entries in my word list contain a two-letter state abbreviation, and maybe it’s higher than that!

i really enjoyed this meta, even before i noticed the extra layer of elegance. brooke told me it was her first meta, but i hope it will not be her last, because i’m really looking forward to her next one. how’d you all like it?

This entry was posted in Contests and tagged Brooke Husic. Bookmark the permalink.