Theme: THE PRICE IS RIGHT – each theme answer has a word meaning “price” on the literal right side of the puzzle. 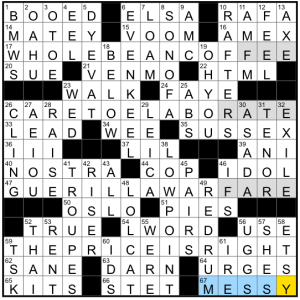 If I’m killing time in a hotel room, THE PRICE IS RIGHT is one of my go-to morning shows. Given that, it took me a long time to find it as the revealer, especially given that I had already gotten the fee/rate/fare answers! “Classic game show” is kind of an amusingly vague clue for THE PRICE IS RIGHT. I’m sure many other puzzle folks like me have seen so many game shows in their lives that when I read this clue I thought “well, that could be literally anything”, and moved on to the downs. I like the theme quite a bit – it’s very cute and reparses the revealer phrase effectively.

It’s a nice touch that all of the theme answers are a grid spanning 15 letters long, because there are a LOT of phrases that end with these letters and otherwise the theme might have seemed too broad. That being said, I got CARE TO ELABORATE with only a few crosses and GUERILLA WARFARE with none at all. Getting to put in so many letters so quickly helped my time be under 3 minutes, which is rare for me on Mondays. CARE TO ELABORATE and THE PRICE IS RIGHT itself were my favorite theme answers – WHOLE BEAN COFFEE is certainly a thing, but it wasn’t an answer I was particularly excited about seeing. Were other folks more into coffee than I am more excited to see in in the puzzle?

Theme: Familiar phrases whose final words are associated with rain. The revealer is “AIN’T NO SUNSHINE” (51a, [Bill Withers hit, and a hint to the ends of 20-, 27- and 42-Across]). 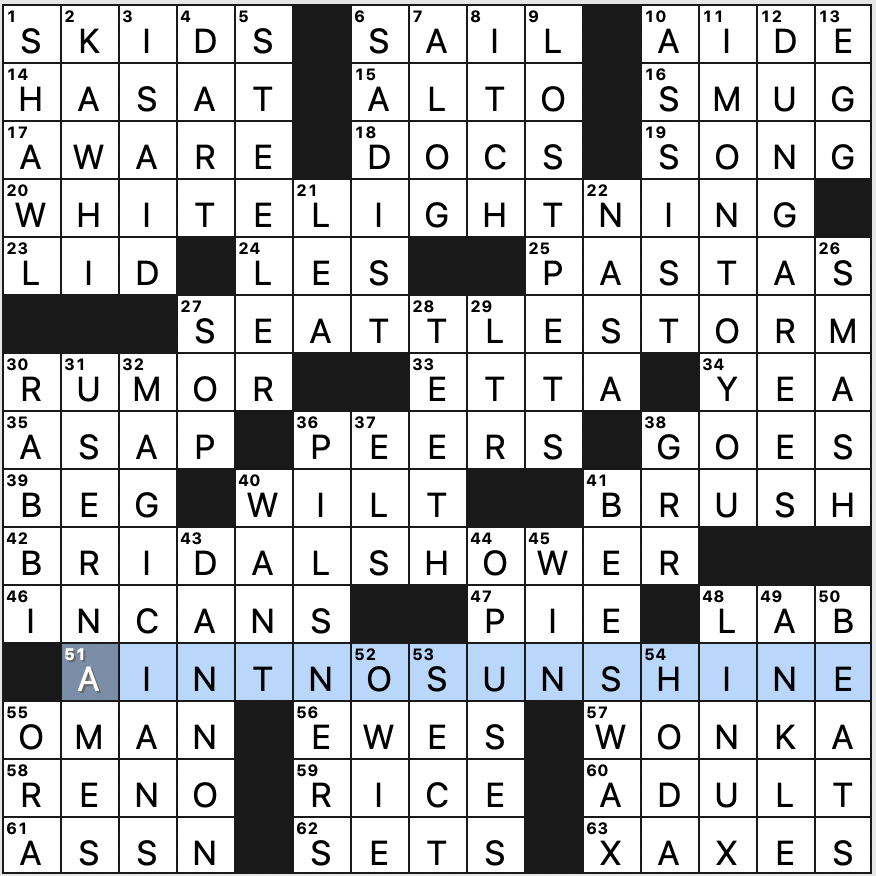 Simple, straightforward theme suitable for a Monday. I enjoyed the revealer most of all and the opportunity it affords me to embed the video below.

I’m liking the fill, too, especially “I’M ONTO YOU, DUNGAREES, USER NAMES, MAGICIANS, and BEESWAX. 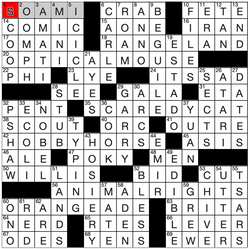 Sometimes you can take a very basic theme and jazz it up with a great revealer. I think that’s what the attempt was today, but IMO it didn’t succeed. The revealer at 56A [Anti-cruelty movement, and what the answers to the starred clues literally have] is ANIMAL RIGHTS — that is, there’s an animal on the right side of each of the theme entries.

IDK, y’all…even with the revealer, the theme just doesn’t feel tight enough. It’s not that hard to come up with three phrases that have an animal name as the second word. It would be cool if they were all big cats, or all sea creatures, or something like that. I also wish that the meaning of HORSE in 42A weren’t so literally similar to a living horse in a way that MOUSE and CAT in 20A and 35A are not.

The fill is good, at least. I enjoyed Eric CARLE, BEGUILE, ORANGEADE, and the cluing of COOK with reference to Downton Abbey at 36D. 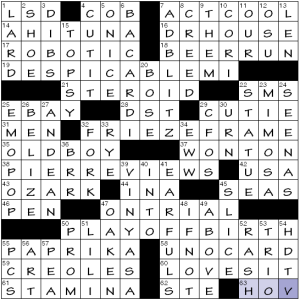 So, nothing to do with Old MacDonald’s farm here. Instead, it’s homophonic hijinks, with each theme answer having an E replaced by an I. The meaning is changed, but not the sound.

Serviceable. I don’t expect much innovation from early week themes, so this is more than fine. 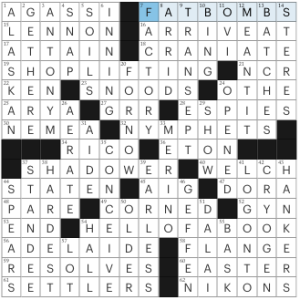 This one didn’t take me as long to solve as some other recent Monday New Yorker puzzles, but it’s definitely got some challenging material in it. I did not know these four at all:

Good morning, folks! I had a great time solving this puzzle because I had one with the same theme. That always makes me feel like the constructor is my friend. (Although in this case, it helps that Rafa actually is my friend.) (My puzzle became lost in the abyss of Oh I’ll Get Around To That Eventually Oh Shit Now It’s One Year Later And I Still Haven’t Gotten Around To It.) 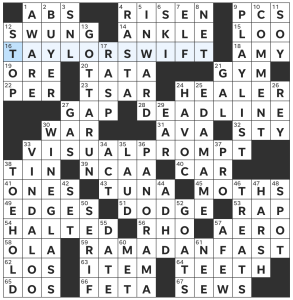 I suspect me and Rafa started in the same place– TAYLOR SWIFT— and then tried to come up with a revealer and matching entries. He went with “Right Quick,” referencing the fact that a synonym for “quick” appears on the right side of the phrase. In my Abyss Puzzle, I had come up with “Rushed Endings.” The other two entries here were VISUAL PROMPT and RAMADAN FAST. I am trying to remember what I had decided on…. I believe “cut to the quick” and “hot breakfast” but I like Rafa’s choices much more. I like how FAST ends up a totally separate word, and I love how all three entries use a double meaning.

The resulting grid is far more asymmetrical than it needs to be– he could have gone with what I like to call “one square asymmetry” but instead we got some funky Tetris shapes on the top and some diagonal chains on the bottom. There are sooo many long bonus entries in this puzzle! GOTTA RUN, PLAYLIST, DEADLINE, WINE GLASS, VINDALOO, PANORAMA!! Even EDAMAME and COMMENT!! That’s EIGHT whole entries in addition to the themies– I feel like in the past I’ve solved actual themeless puzzles with fewer exciting long entries.

Cluewise, some things to call out: