Happy weekend! If you’re like me, you’re desperately holding onto the end of July, and today’s puzzle will hopefully give you some enjoyable moments before those Sunday scaries (and August scaries!) kick in. This week’s puzzle is a classic “add or take away a letter to get a new fun phrase” puzzle: 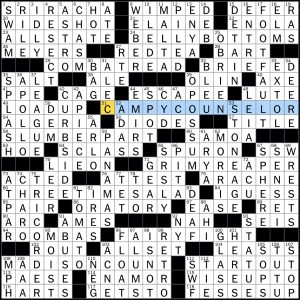 – 24A BELLY BOTTOMS [Places where some belts are tightened?]
– 29A COMBAT READ [Stephen Crane’s “The Red Badge of Courage,” e.g.?]

– 71A GRIMY REAPER [Harvesting machine that needs cleaning?]
– 80A THREE TIMES A LAD [Doctor’s description of the birth of triplet sons?]

– 96A FAIRY FIGHT [Battle between Tinker Bell and Princess Ozma?]
– 108A MADISON COUNT [Census-taking of a Midwest capital?]

I tend to prefer this type of puzzle when the addition or subtraction of a letter allows both parts of the phrase to be interpreted differently, so I was mixed on this set of theme entries. CAMPY COUNSELOR (my personal favorite), GRIMY REAPER and BELLY BOTTOMS, for example, repurpose both words for the new phrase in a way I really enjoyed, while COMBAT READ, SLUMBER PART and FAIRY FIGHT didn’t.

What I did appreciate about this puzzle, though, is that there was a reason for why the Y was being added or taken away, referenced at the bottom of the grid:

The Y that would have been in the second of each theme entry pair was moved up two squares (WISE UP TO = Ys up two (spaces)) to the first of each theme entry pair. That level of theme tightness + grid constraint impressed me, and the fixed parameters of this theme + revealer also make the bit of glueiness in the puzzle make sense. (The corners of the grid were particularly tough for me.) Understanding the theme also gives the title (“Why? Well, Why Not?”) a satisfying click.

There were some fun, modern entries that I enjoyed, like SRIRACHA, PPE, SRSLY (short for seriously??), and DEB Haaland, but it was weird to see the clue to TITLE at 57A [Count, e.g.] dupe one of the theme answers (MADISON COUNT) – I’d hope that the editing would be a smidge tighter than that, especially with such a widely clueable entry. Also, did anyone else put ALEXA at 5D? Maybe that’s part of why I got so stumped in that corner and solved it last!

That’s all I’ve got for today’s puzzle. Let us know what you enjoyed about it (and any ideas for other theme entries!) in the comments below. Have a great weekend and a lovely start to August!

Brace yourself for wackiness in today’s WaPo.

THEME: Animals are inserted into names of notable people and zaniness ensues. 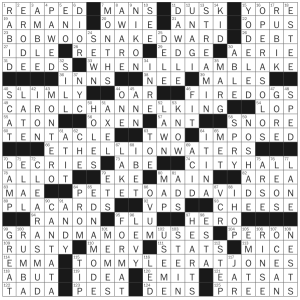 And I totally forgot until now to check the first letter of the animals to see what apt word is spelled out (as per Evan’s pre-solve note). SHELTER! That makes sense! Since each person has “adopted” an animal, they are now “animal shelters.” Cool!

Wowza, this one really embraces the “If you’re gonna go wacky, go big or go home” philosophy of crossword theme development. I solved steadily from North to South and uncovered the (hilarious) BOB WOOS NAKED WARD first. I thought that one was very wacky, but I think that was the most grounded of the bunch. Thank goodness each entry was clued twice so I had a shot of parsing it correctly! Otherwise I might still be scratching my head.

So if you love wacky, you’ll love this. And if you don’t, you won’t. I think that’s fair to say! I love the wackiness, even if I do roll my eyes once or twice (looking at you E.T. HELLION WATERS). But c’mon… WHEN ILL, I AM BLAKE (Lively) is just so much fun. I really want to know what illness that is and whether or not it’s regrettable to have.

random thought: For some reason I really want the answer for one of them to be CHANNEL CAROL KING…

Anyway, fill was fairly simple. Many of the across clues I didn’t even see as I was able to fill in many areas sans crosses. The question mark clues really landed in this one:

Erm… does anyone call a [Tequila-based cocktail, informally] a MARG? That’s new to me. Regionalism?

Fun one today! Lots of playfulness, and a really clever Birnholzian layer to top it off!

As the title suggests, there are eight songs used in this puzzle’s theme, however that fact isn’t exactly pertinent.

What is pertinent is the revealer at 72a DOUBLE STANDARDS [Unequally applied rules, or a hint to interpreting the starred clues’ answers]. The other theme entries are familiar phrases but clued with respect to a popular song (i.e. a standard). One of the words in each theme answer, when doubled, is the title to said song. 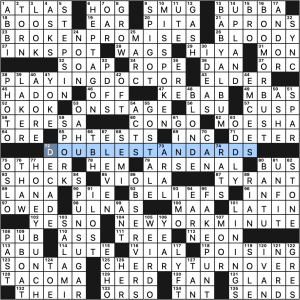 Fun theme once I caught on to the doubling aspect. I wouldn’t say all of these are “standards,” but I’m okay with applying the term loosely. I suppose I’m right in the target demographic for this grid since I’ve listened to most of these songs all my life. I imagine some solvers (older or younger) enjoyed it less if they didn’t recognize the songs.

Enjoyable puzzle, especially if most of the songs are recognizable. Four stars.

Been seeing this byline quite a few times lately. And been enjoying it! 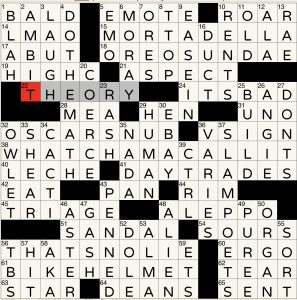 Excellent, excellent clue for OSCAR SNUB [Result of a critical error?]. I mean, I don’t know if it’s accurate to equate a critic’s SNUB with an Academy voter’s error, but I still love that clue. 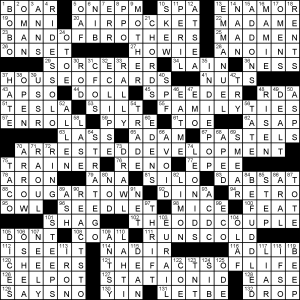 Theme: Each theme answer included the abbreviation for a business executive. 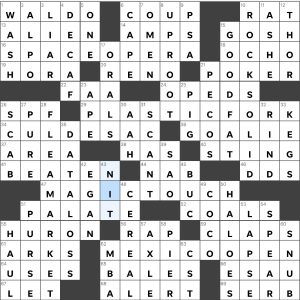 This theme was exactly as I expected it to be, meaning the theme device was super clear in the puzzle’s title. I loved SPACE OPERA, MAGIC TOUCH, and MEXICO OPEN. We hear a lot about the US Open or other golf tournaments, so I thought that this puzzle did a nice job drawing attention to this one.

A few other things I loved:

I’m late with this because it was moving day, so I’m writing this review of a great puzzle from the box-filled space that is my new apartment. Thanks for y’all’s patience!