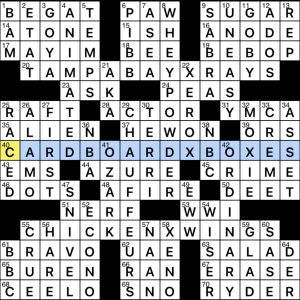 Hi everyone! This week’s Jonesin’ theme involved adding the letter X, representing the multiplication sign, into different phrases to create new products (“product” as in an item for sale, as well as the result of multiplying numbers).

Only three theme entries this week, although they’re nice and long at 13 and 15 letters. Other things:

I didn’t pay any attention to the theme until I got to the revealer which took my by (a pleasant) surprise. Said revealer is CANTERBURY TALES (62a, [Story collection (with “The”) in which the surnames in the starred answers are characters]). The other entries are famous people whose last names are also characters from Chaucer’s well-known work. 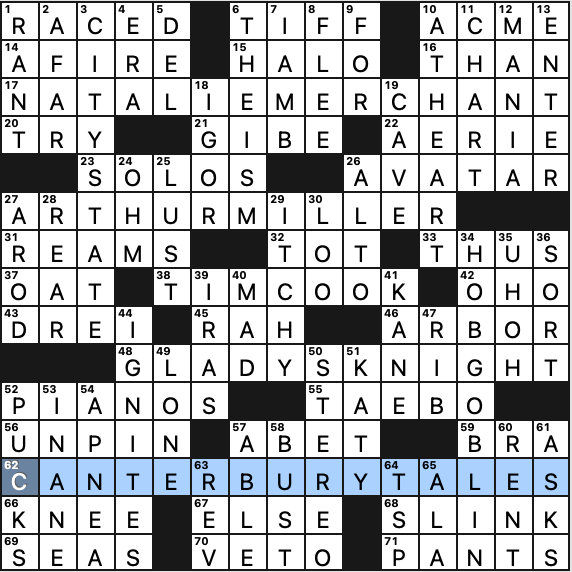 I really enjoyed the aha moment that came with the revealer, and I love the theme set. These names are all well known, and I’m wondering if this might be an exhaustive list of famous surnames that are also characters from the Tales. Sure, there are other famous Millers and Knights, but there’s no famous Squire (Billy Squier doesn’t count), Prioress, or Monk for example. (Yes, I looked up a list of characters.) Jim Parsons comes close to the Parson, but not close enough. What we’re given is an excellent set, beautifully laid out with the grid-spanners on the outside and the short, 7-letter TIM COOK in the middle. Just perfect.

Edited to add: Oh wait. Thelonious Monk would certainly work, but only if another 14-letter name were found. If you can think of other names, I’d love to hear them.

HOBGOBLIN tops the fill along with CITY-STATE. Nothing else stands out, but it’s all solid and clean throughout.

This one was a pleasure to solve. It’s one of those why-didn’t-I-think-of-that kinds of puzzles, and it’s perfectly executed. 4.5 stars. 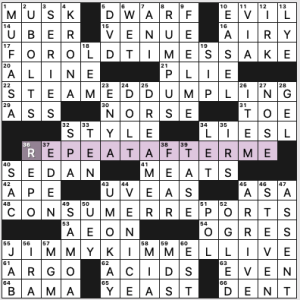 The theme revealer is REPEAT AFTER ME, clued via 36a. [Swearing-in words … or a hint to 17-, 22-, 48- and 55-Across]. Those other themers contain a doubled letter after the letters ME, “repeat {a letter} after ME.” The theme concept doesn’t grab me at all, but the choice of themers redeems the puzzle: 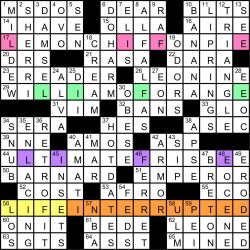 Hello there, everyone! Here is hoping all of you are doing well as we officially turn into August and to the latter half of the summer!

Today’s theme is all broken up, as the first three them entries all have circles which end up breaking up the same word. That word, when combining the circled letters, is “life,” and the fourth theme entry, LIFE INTERRUPTED, acts as the reveal (56A: [New York Times column by Emmy-winning journalist Suleika Jaouad…and a hint to the puzzle theme]).

Definitely a puzzle that would leave you hungry when finished, from BLTS (10A: [Crunchy sandwiches]) crossing BANANA (10D: [Potassium-rich smoothie fruit]), with the latter crossing the aforementioned lemon chiffon pie. Also makes me want to bake a pie for the first time in forever, too! Have to love a grid in which the constructor works in her alma mater, which is the case with the appearance of BARNARD (50A: [Seven Sisters college in New York City]). One answer made me think back to my parents shopping for me when I was younger at VIM (pronounced with the letters spelled out, V.I.M), which is a jeans and sneakers store that, I believe, is exclusively in New York and New Jersey (31A: [Pep]). That store was like the Old Navy for people in Brooklyn before Old Navy gained a stronghold on the jeans apparel. Might have to go back there for old time’s sake when I get a chance…which is soon, as I think there’s a rip in one of my pairs of jeans currently in rotation.

“Sports will make you smarter” moment of the day: TRIANGLE (12D: [Isosceles, for one]) – Along with being one of the most historical baseball stadiums, Fenway Park in Boston may actually be the game’s quirkiest as well, from the 37-foot Green Monster wall in left to Pesky’s pole in right field that’s barely 300 feet from home plate. Deep right-center field features a region called the triangle, the shape that the walls make when coming together in that area. The point of the triangle measures 420 feet from home plate, and any ball that is hit there safely will usually lead to the batter getting a triple, or even an inside-the-park home run. 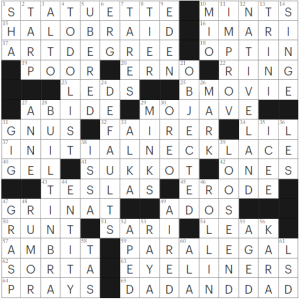 Not too much of a challenge, but an enjoyable passing of the time. What I noticed most during the solve was the idiosyncratic or personal flavor in many of the clues. Talking about stuff like 23a [Glowing parts of some menorah sweaters] for the relatively humdrum LEDS, and 54a [What a nursing pad absorbs] LEAK. 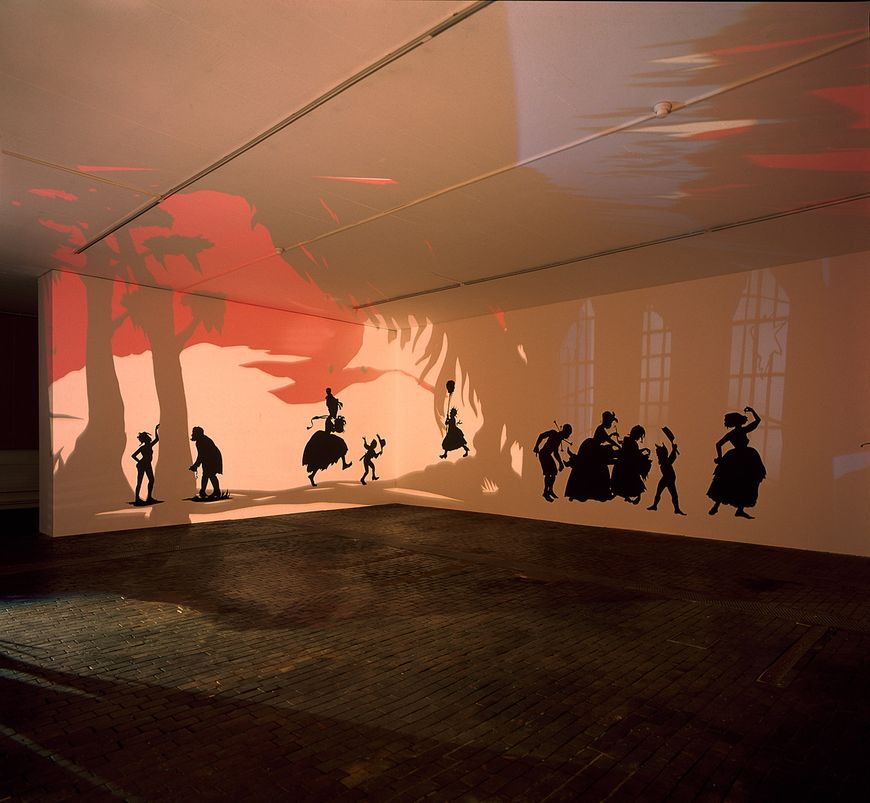 Matthew Stock’s USA Today Crossword, “Math Is All Around Us” — Emily’s write-up

Fun puzzle with a great theme and themer set plus a vertically symmetrical grid! 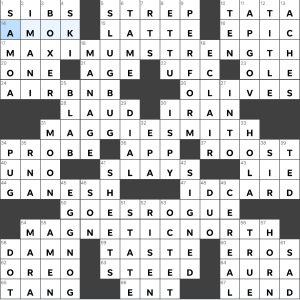 Theme: the word “math” encapsulates each of the themers, MA…..TH

Despite how you might feel about math, the title is certainly not hyperbole and is a great hint for today’s theme though I didn’t see it until after I solved and took a step back to look at the grid. I got a good start on MAXIMUMSTRENGTH with the first three letters buck kept thinking along the lines of “saturation” instead of potency but after a few crossings in the second half then the rest fell into place. Kudos to MAGGIESMITH in all of her roles, of which Gosford Park is a favorite of mine. The second half of MAGNETICNORTH I knew right away but I needed crossings for the first half, thinking more of “due” or “true” instead.

Stumpers: ECLAIR (could only think of “cannoli”), ROOST (so many possibilities: “nests”, “limbs”, “trees”, and my favorite option “perch”), and RTS (I couldn’t come up with a good abbreviation for tweets and it clearly wasn’t DMS so this one got me good and took up a bit of my time)

It’s been a while since I’ve done a write-up for a “contained” themer of this type so lately I’ve been focusing on the solve then looking for a themer, unless something jumps out during it. Lots of great fill today and cluing overall too! Love the grid design–feels like a piece of art, which I doubly enjoy.

A somewhat depressing one for me as I have finally come to terms with the fact that my vision ain’t what it used to be :)

THEME: Parts of the eye can be found in the second word of common two-word phrases 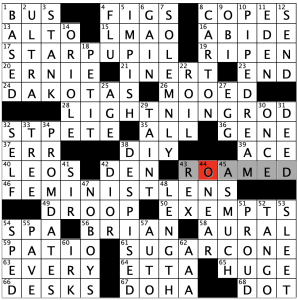 The first themer I uncovered was LIGHTNING ROD clued as [One is tall and attractive], so I thought that the theme was going to be things that can be described as something fetching/sexy that are just normal things. At the time that made sense to me with the title. I even convinced myself that was still the theme when I uncovered STAR PUPIL next clued as [Head of the class]. When I caught on to what was actually happening, dare I say I was kind of bummed? I mean the theme is totally fine, but I kinda liked the idea I initially thought.

Anyway, there is no STANK in this puzzle. Enjoyed the trivia for TANGO [Dance banned by Pope Pius X]. I’m guessing he wouldn’t be into twerking either.